121 Stroud Green Road has been a cursed address for eateries. Over the past three years or so, the site has been home to a caff, a noodle bar, a fried chicken take away joint and a Turkish restaurant (where I once spied one of the owners crying into her hands). The long-windedly named Rub Slow Food Diner and Milk Bar is the latest tenant and offers a simple menu: Caribbean-style meat, milkshakes and New York-style cheesecakes.

Rub feels like a cross between a student union bar and a Shoreditch squat. The threads strung between the bare lightbulbs look a little silly, while reprints of old movie posters line the walls and the tables are all decorated with musical themes (there are Bob Marley and Nine Inch Nails tables, for example).

Rather than table service, you fill out a checkbox order form and hand it in at the till with your payment. Take a seat and wait for the food to arrive. The staff still need a lot of breaking in though – misreading order forms and bringing incorrect dishes was annoyingly common.

I wasn’t expecting much from the pulled pork given that even dedicated barbecue restaurants in London have trouble producing an edible version. Rub’s version was far too dry and bland and the tame ‘extra hot’ sauce did little to revive it. At least the accompaniments of malty, lightly spiced rice and earthy, zesty leaves were pleasing. 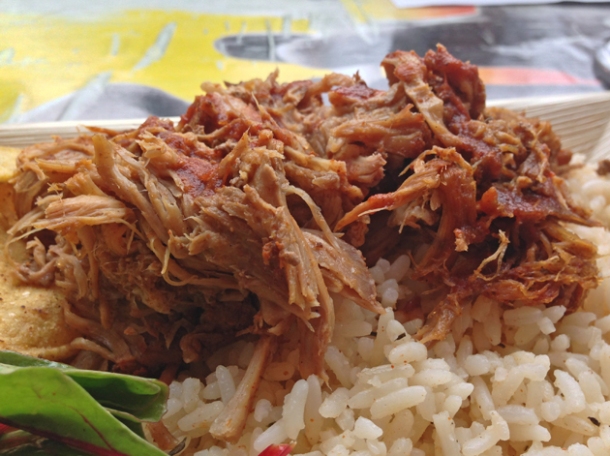 Pull the other one…

Far better than the tasteless pulled pork was the side dish of jerked beans. The soft, creamy beans came in a surprisingly hot and peppery scotch bonnet-based sauce. 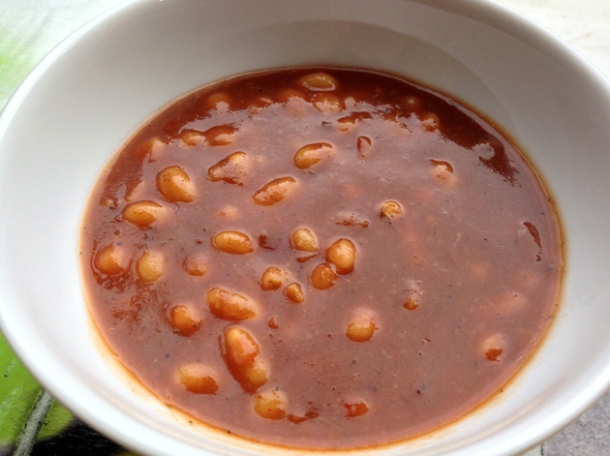 For a ‘slow food’ diner, the dishes come out at a rapid pace.

Despite the lengthy list of cheesecakes on the menu, typically only one or two are available on any given evening. The raspberry cheesecake was thick, dense and very creamy with a soft, crumbly biscuit base but the raspberry flavour was barely detectable. The accompanying vanilla ice cream was very muted too. 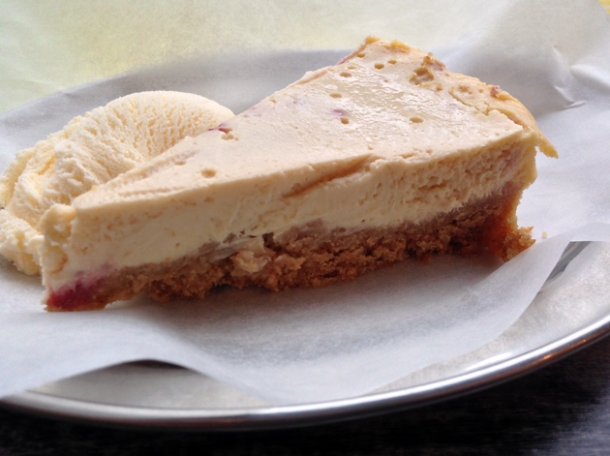 Why is this metal plate so small?

Although the chocolate milkshake was a bit on the small side and its thin milkiness won’t suit everyone, I did like the dark chocolatey taste. 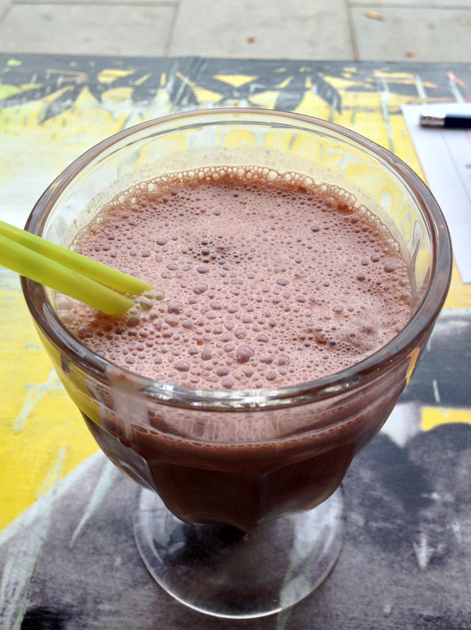 Rub-a-dub-dub, thanks for the grub?

The limp pulled pork from my first visit has a poultry counterpart in the form of the jerked chicken. The bone-dry breast meat was only very lightly spiced. Lame. 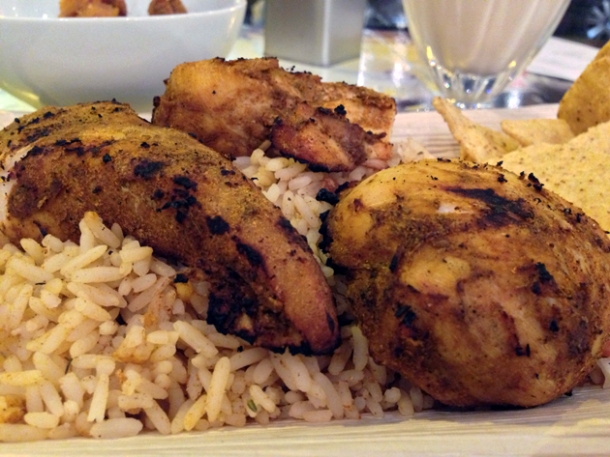 Why is the meat accompanied by nachos?

Once again it was the side dish that was far more tasty than the meaty main. The roasted plantain slices were sweet and tender. 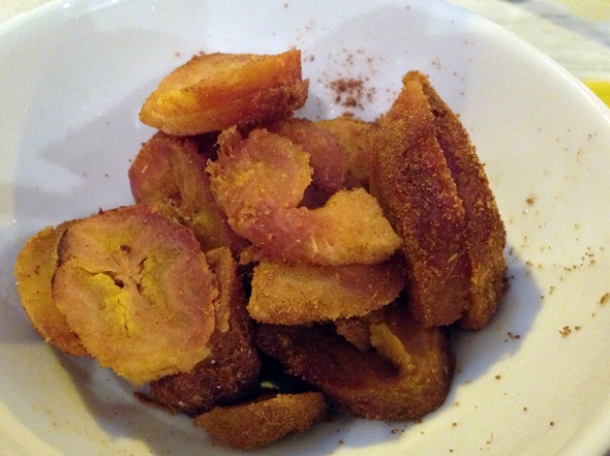 Jerkmerica? What kind of email address portmanteau is that?

The peanut butter milkshake didn’t manage to replicate the viscosity of peanut butter, but its distinctly sweet and nutty taste was correct and present. 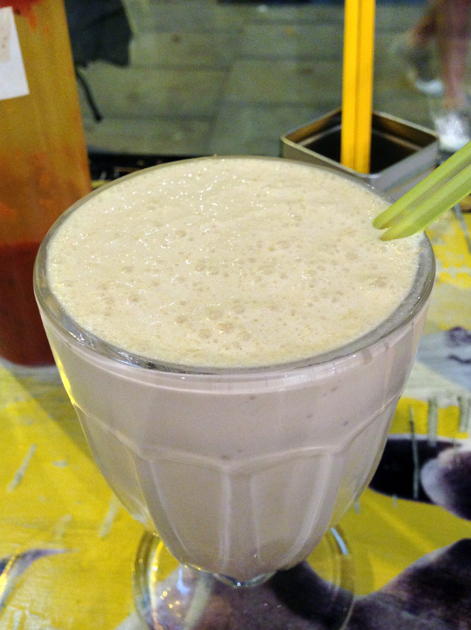 I’m not satisfied until I hold you tight.

The rum and raisin cheesecake was very similar to the raspberry cheesecake from my first visit, except the muted raspberry flavour was replaced by a light hint of rum and the almost complete absence of raisin. 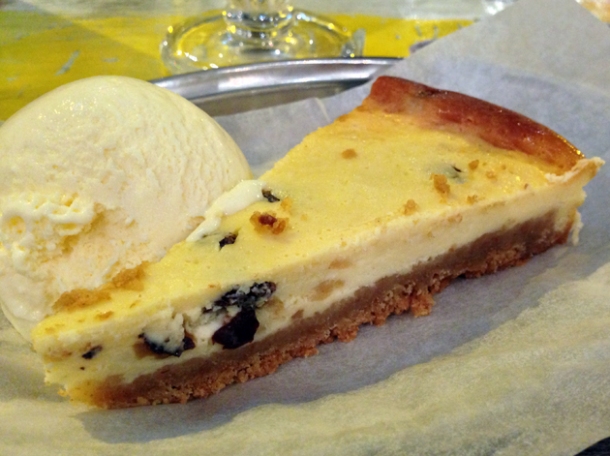 Yo ho ho and a bottle of rum.

The most successful meat dish I had at Rub was the pulled lamb. The tender strands of reasonably moist meat actually tasted of lamb which also had a mild fruity spiciness to it. The portion size was noticeably larger this time around, with the small but acceptable servings replaced by a heap of meat almost twice the previous size. 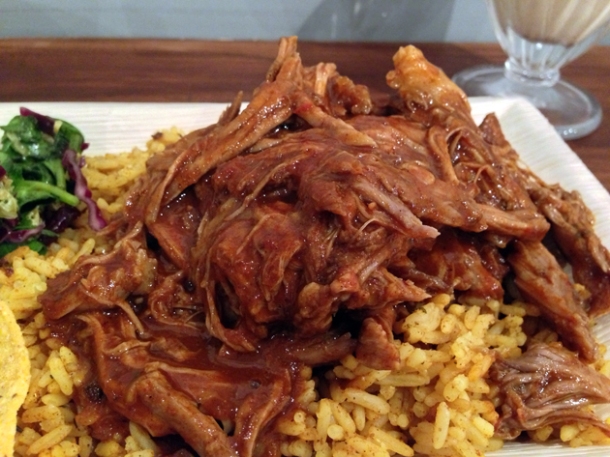 The black sheep of the family.

Although I had ordered sauerkraut and pickle, I was served coleslaw by accident instead. It was reasonably good as coleslaw goes – the heap of cabbage and carrot strips was sharp and not excessively creamy. 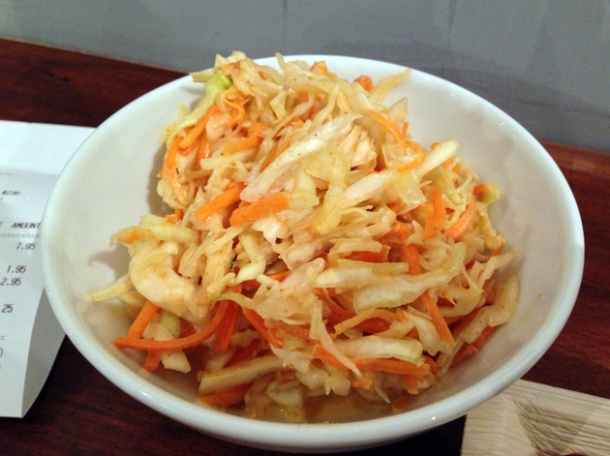 Coleslaw does not count as one of your five a day.

The only cheesecake available was once again raspberry, but it was a little different from its previous incarnation. It was lighter and less densely packed, but with a stronger taste of raspberries with a slight grittiness to it reminiscent of the actual texture of the fruit itself. The bolder taste of fruit was welcome, although it was a shame it came at the expense of the delightfully thick creaminess of the rest of the cheesecake. 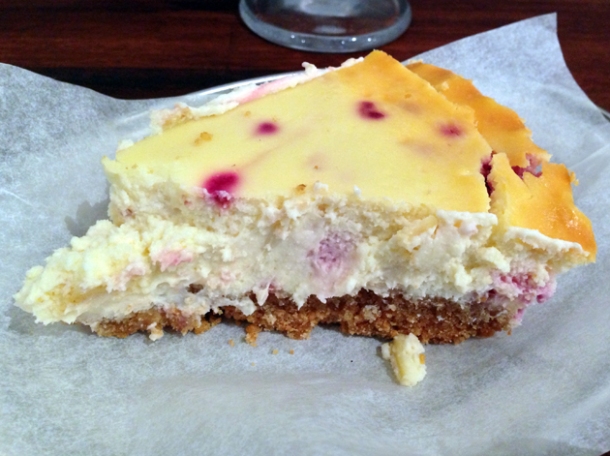 Washing it all down was the vanilla and toffee milkshake. The combined taste was addictive and reminiscent of caramel and malt. 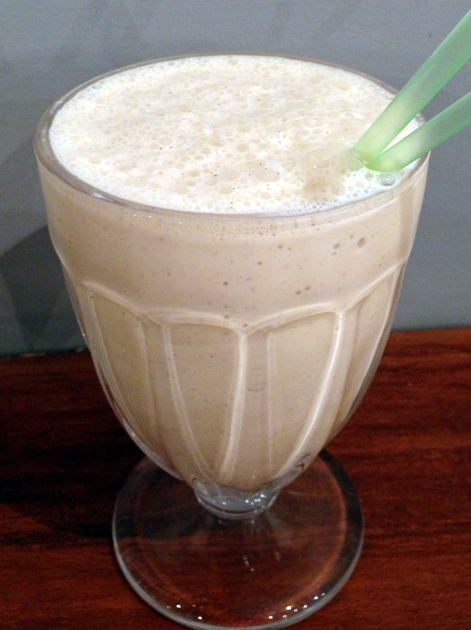 Stroud Green Road needs more good restaurants to serve the inhabitants of Hornsey, Crouch End and beyond, but Rub just isn’t good enough. The low prices, quality side dishes and milkshakes aren’t enough to make up for the generally substandard meat dishes and inconsistent cheesecakes.

Average cost for one person including soft drinks: £16 approx.