Until recently I’d largely become bored of Italian restaurants in London. They were either underwhelming, needlessly fussy or old-fashioned and just plain awful. What restored my faith wasn’t a glitzy haute cuisine restaurant in Mayfair or Chelsea, but a small bistro near Finsbury Park called Osteria Tufo.

Osteria Tufo is located on a quiet residential street and is a small place with room for just three dozen covers or so. This number includes the outdoor al fresco dining patio which is a very pleasant place to wile away a balmy summer evening. This is just as well as the service was slow on on my first two visits, but by the third it was much more efficient. Nonetheless, the service was always very friendly and chatty. The small menu changes almost daily, but is Osteria Tufo currently only open for dinner.

Osteria Tufo is one of the few Italian restaurants in London I know of that serves porchetta. This Italian roast pork dish is, at its best, ridiculously addictive. The version here consisted of crisp slices of back bacon with a sweet, caramelised edge and hints of rosemary. The herby porkiness went very well with the earthy leaves dressed lightly in vinegar. It’s a good version of porchetta and it could easily be a main dish in its own right if other, different cuts of pork were included in the mix along with some crackling. 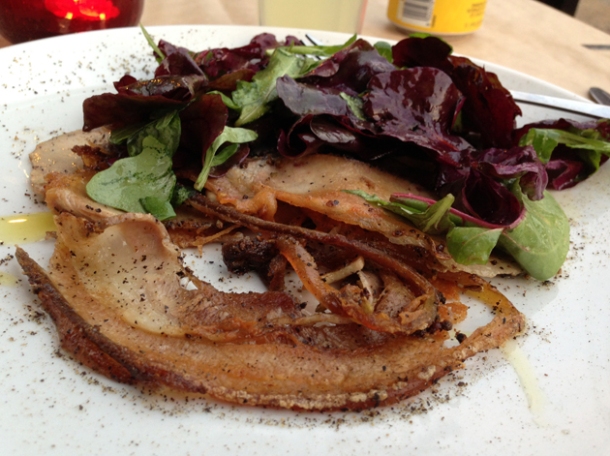 Seafood tagliolini could easily have been a massive disappointment, but I needn’t have worried. The generous helping of thin, flat egg pasta had a firm bite and was topped with prawns, clams, squid and swordfish. The squidgy clams had occasional hits of earthiness, while the prawns provided a delightfully salty, juicy hit. The real highlight were the meaty chicken-like pieces of swordfish which had a sweet, lemon-like flavour to them. 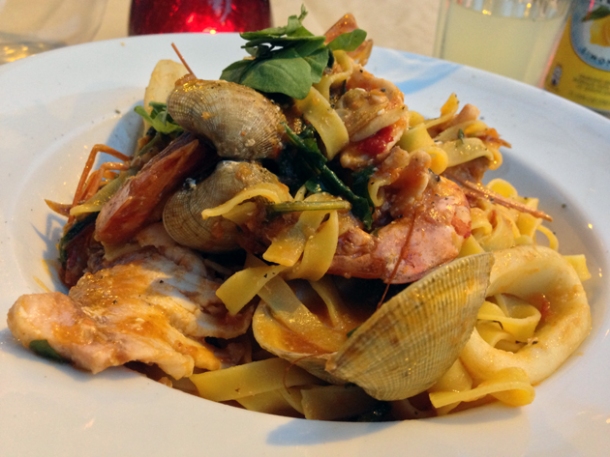 Fruits of the sea.

The affogato was let down by the bland vanilla ice cream, but it was livened up by the bitter, chocolatey espresso which is served on the side but meant to be drizzled all over the ice cream. 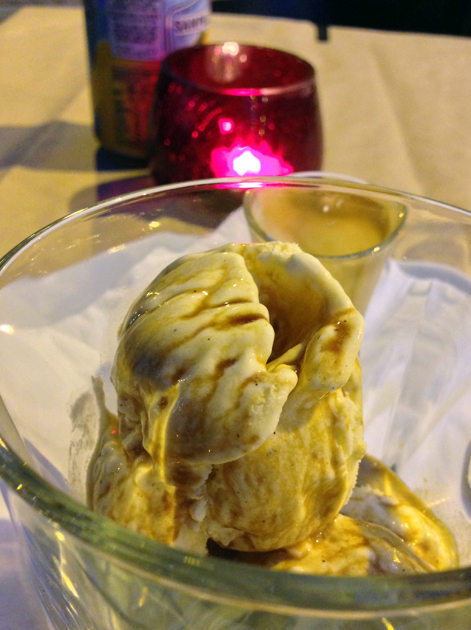 On my second visit I started off with the mussels served in a white white, chilli, garlic and tomato sauce. Although the chilli and garlic were very muted, the punchy sweetness of the tomatoes and the occasional boozy hits made the thin sauce an excellent compliment for the salty, zingy freshness of the small mussels. 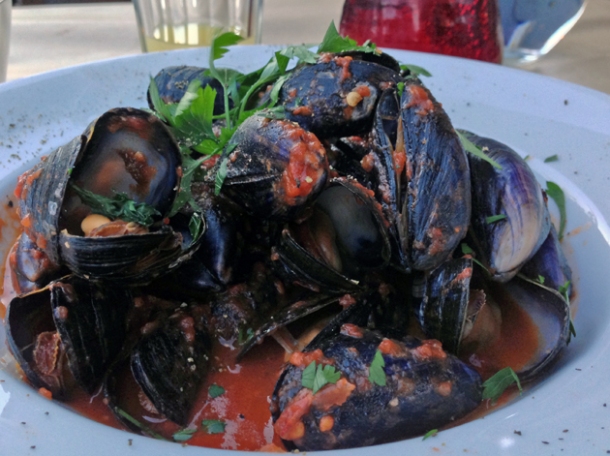 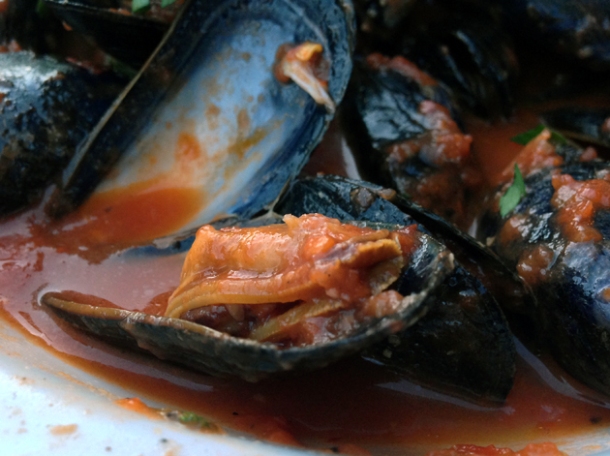 PUNY MUSSEL. NOW I NOM YOU.

The smooth, processed porcini filling of my ravioli main course didn’t look like much, but its buttery, nutty flavour was rich and satisfying. The punchy sweetness of the tomato sauce tended to obscure it though, especially when taken with a mouthful of fresh, zingy basil. It seems churlish to resent a well-made pasta sauce, but its presence here really was a distraction from the ravioli and its superb filling. 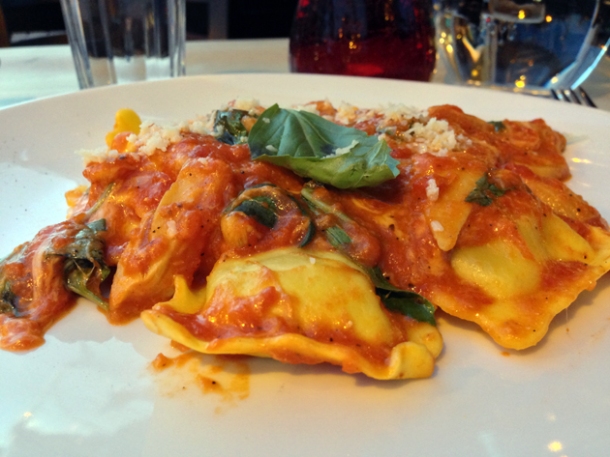 Although polenta isn’t a traditional accompaniment to pasta, my ravenous appetite demanded a side dish. The fried slices of corn meal had a firm bite and a fluffy, if also slightly bitty interior. A topping of fresh parsley was a nice touch, but I couldn’t help but wish for polenta in the form of a creamy, fluffy mash. 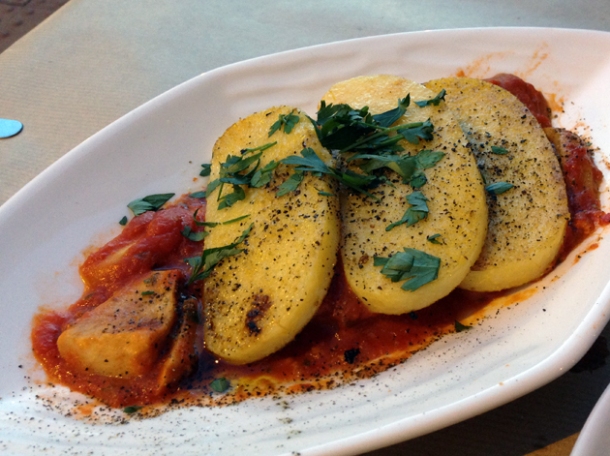 Sadly, my second meal ended on a sour note. Judging from the time it took to reach my table, the kitchen had clearly botched my raspberry creme brûlée and had to start again producing a weird chocolate creme brûlée instead. The thin, chewy film that passed for a crust was odd and unpleasant, as was the flat flavour and the inconsistent texture of the custard base which ranged from lumpy to smooth. It was frankly rubbish, but I was too embarrassed for the kitchen to send it back. 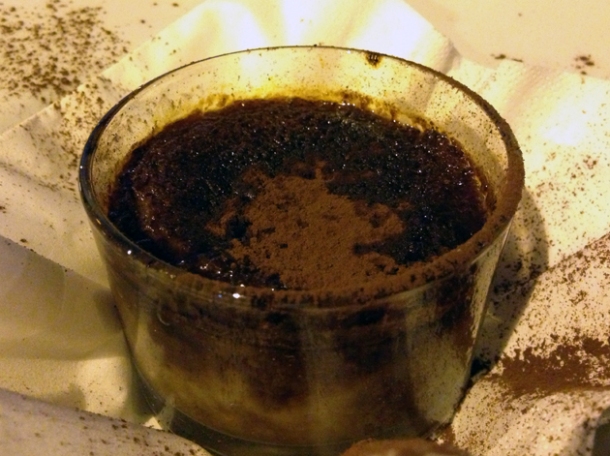 What the hell happened?

Prawns and artichokes sounds like an odd pairing and while the two didn’t compliment each other exceedingly well, they were still well prepared. The prawns were fresh, plump and firm, while the artichoke pieces were tender with a hint of zestiness. I could’ve done with less leaves and more artichoke, but even so this was a good starter. 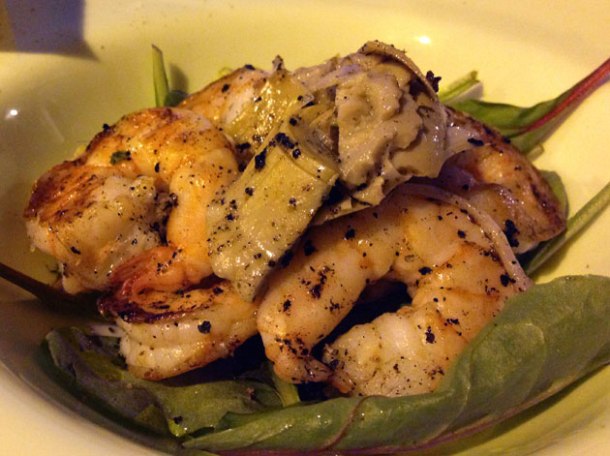 The Picky Glutton is listening to The Beach Boys.

Pigeon wrapped in pancetta and served with mashed potato was an oddly wintery dish for the muggy Mediterranean-style weather on my weekday evening visit, but it wasn’t too heavy. The small but dense bits of pigeon were tough, but their offally, woody taste was an excellent coupling with the smoky pancetta. The excessively soft broccoli and thick, stodgy mash accompanying the meat were disappointing though. 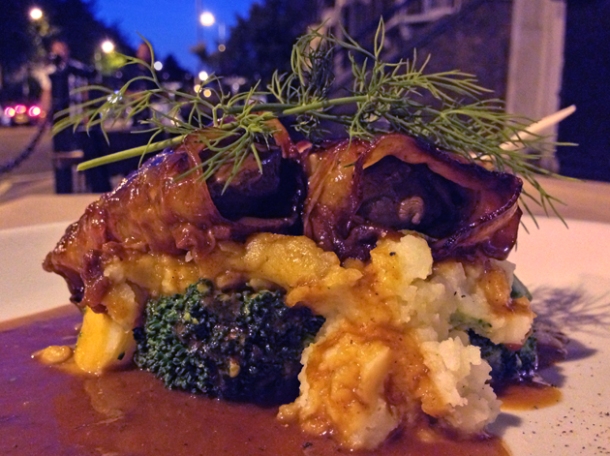 The only good pigeon is a dead pigeon.

Following the disastrous creme brûlée from last time, I wasn’t expecting much from my panna cotta but it was surprisingly pleasant. The firm, milky gelatin was topped with a well-chosen thin, dark, slightly bitter chocolate sauce. The flavours of this light dessert were a little muted, but the successful contrasting of different textures worked well. 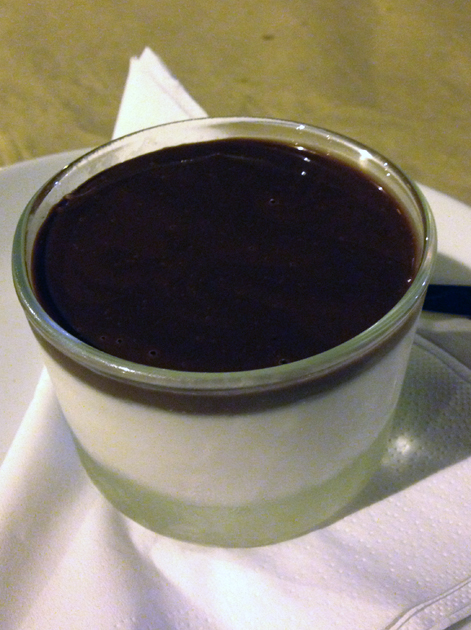 It’s difficult to capture the colour brown under street lighting.

Despite a few missteps, some small and one serious, I’m very fond of Osteria Tufo. The simple, but generally elegant and tasty dishes make it a delight worth savouring. It’s not quite compelling enough to make it a destination worth travelling over town for, but if you’re in the neighbourhood then it’s well worth a visit.

Total cost for one person including soft drinks: £30 approx.