The eastern bit of New York’s Greenwich Village seems to have more than its fair share of small, one-trick pony eateries and I seem to have eaten at a couple of them. First there was Luke’s Lobster, then there was Porchetta which is just across the road from the East Village branch of Luke’s. Like Luke’s, Porchetta is nothing more than a counter and a couple of bar stools, although Porchetta also has a small table out front on the sidewalk (or pavement if you will). I found the photo books placed on the tables to be a charming touch. The photos show some of the free range pigs slaughtered to produce the porchetta lounging around in fields down at the farm while they were still alive. Then again, you might find that off-putting.

Porchetta is a deceptively simple roasted pig dish from Italy that actually involves quite a lot of preparation. It’s the headline item at Porchetta and can be ordered either as a sandwich or as a plate, although there are a handful of other dishes including daily pasta specials. I opted for the plate where the pork arrives accompanied by a hearty serving of cabbage and white beans.

Close up of the porchetta plate – porchetta, beans and greens.

The pork is tender and succulent, but not so much so that you’re constantly wiping meat juices off your chin. The meat is gently seasoned resulting in a herby, slightly salty flavour that is surprisingly simple and understated, but pleasing all the same. The simply cooked vegetables provide a much needed antidote to the meat – the lightly salted cabbage goes down especially well.

Disappointingly my porchetta plate didn’t include any crackling, but the pig skin did turn up in my side order of roasted potatoes. Simply calling them roasted potatoes doesn’t quite do them justice though – they’re very crispy, almost chargrilled, on the outside yet very fluffy and soft on the inside. Crumbled over the top are the crispy, crunchy burnt ends from the pork – their salty bite goes very well with the potatoes. The best bit of the side dish are the large chunks of crackling – the chargrilled, caramelised chunks of crispy pig skin that have an incredibly salty, smoky hit that’s especially sensual as you’re not expecting to find it with the potatoes. The roast potatoes are very good in their own right, but when paired with such excellent pieces of crackling, it should be considered an essential accompaniment to your porchetta.

The standard by which all other roast potatoes are measured.

I washed it all down with a bottle of black cherry soda from Boylan, a brand I’ve never heard of before. The lightly carbonated drink tastes less like Cherry Coke and more like a cross between Calpol and cherry-flavoured yogurt which may put off some but instantly makes me hanker for an ice cold bottle right now.

But what about dessert?

The only dessert at Porchetta is a piece of raisin and almond biscotti. Not bad, but nothing to write home about. You may want to head down to the nearby Il Laboratorio del Gelato for some unusually-flavoured gelato instead. The cheddar cheese gelato tastes like a watered-down clotted cream ice cream, but the black sesame gelato has a pleasing, nutty taste that’s better than other black sesame ice creams I’ve had in Japanese restaurants.

Cheddar cheese gelato at the nearby Il Laboratorio del Gelato 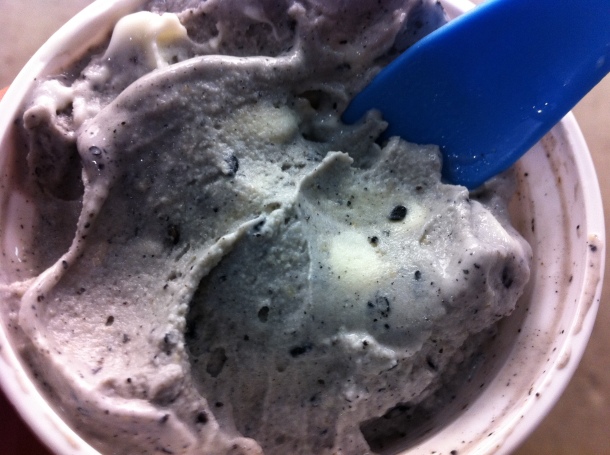 Black sesame gelato at the nearby Il Laboratorio del Gelato

The chocolate and Thai chilli gelato may sound like a disaster in the making, but it’s not too far removed from the original Aztec chocolate recipes which used chilli. The tingling sensation of heat on the tongue that follows the usual creamy sweetness is odd, but quite addictive.

Although Porchetta is good, it’s not quite as mindblowingly amazing I had been led to believe. The eponymous pork is simple and well-prepared, but it’s upstaged by the crackling-endowed roast potatoes which steal the show. Despite all that, if you’re in the East Village and have a hankering for meat then Porchetta is a good bet. If you think pork is a bland and uninteresting meat, then Porchetta shows that it most definitely isn’t.

Total cost for one person including soft drink (excluding gelato from Il Laboratorio del Gelato): $22 (approx. £14 at time of writing)