There are more pizza restaurants in London then there are slow-moving convoys of exchange students, so any new pizza place has to try hard to stand out from the crowd. Homeslice, a new restaurant in Neal’s Yard of Covent Garden, relies on two hooks – huge 20in pizzas topped with unusual ingredients, available whole for £20 or by the slice for £4. Neither of these will please puritanical fans of traditional Neapolitan-style pizzas, so Homeslice has to get both the quality of the base and the combination of toppings spot-on to avoid being nothing more than a gimmick restaurant for tourists and other novelty-seekers with short attention spans.

The short menu changes occasionally with only nine or so different topping combinations available at any given time. A 20in pizza is a massive undertaking, but only the margarita, the courgette and artichokes and the salami and rocket are also available by the slice as well as a whole pizza. Even a well-chosen selection of toppings would get tiresome on a honking 20in pie, so you can also have a half-and-half pizza – one selection of toppings on one side, with another selection on the other. All of the pizzas I tasted had a crust that was soft and delightfully fluffy, but the base drooped under the weight of the toppings which wasn’t surprising given both its thinness and the huge overall diameter of the pizza.

Reservations are only taken at Homeslice for groups of five to ten people, so if you’re part of a smaller posse then be prepared to wait or get take out. The Euro Hedgie and I opted for a take away, especially as Homeslice’s dining room was unbearably hot on our weekday summer’s evening visit. We opted for a half-and-half with courgette and artichoke on one side.

That’s an Oyster card holder in the corner for size comparison.

The courgette and artichoke is a bianca-style pizza, which means it’s made without tomato sauce. Bianca pizzas can often be excessively greasy, but that wasn’t the case here. The thin, buttery courgette slices went beautifully with the sweet, juicy artichokes. The Euro Hedgie would’ve preferred slices of courgette with differing levels of thickness to provide more variation in texture, but that’s nitpicking of the highest order.

The yellowishness is due to the street lighting in Neal’s Yard. It was originally a lot worse before I toned it down in Photoshop, so stop complaining.

The other side of our half-and-half was ox tail with horseradish cream. The earthy, musky strands of ox tail were moreishly meaty, but there wasn’t a lot of it – the Hedgie estimated there was little more than 100g on our half. The ox tail was complimented surprisingly well by the large helping of fresh basil and the heat and the milkiness of the distinctly flavoured horseradish cream, although a little more spicy heat would’ve been even better. 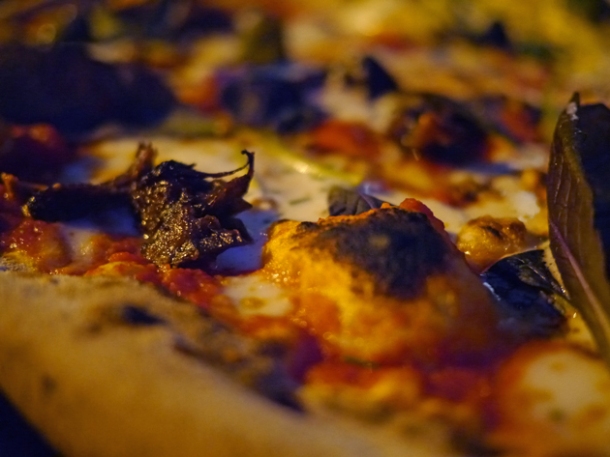 That’s a bit of oxtail on the left. 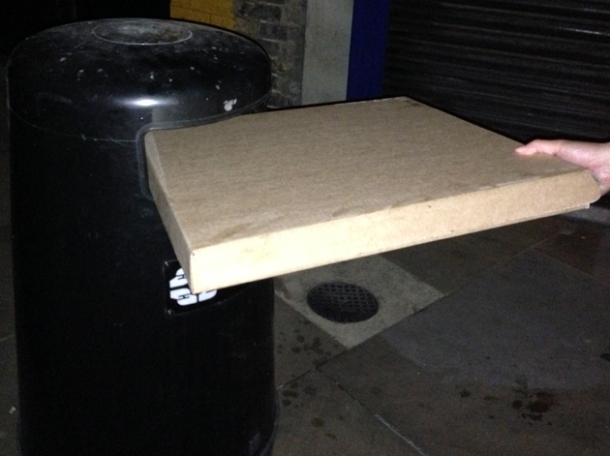 I returned to Homeslice with Templeton Peck and managed to snag a table this time around. For one side of our half-and-half, we opted for the mushroom, ricotta and pumpkin seeds which turned out to be our favourite. The earthy mushrooms, which surprisingly included some taut and firm enoki shrooms or something similar, was complimented very well by the coarse yet fluffy and creamy ricotta. The pumpkin seeds didn’t taste of much, instead providing a variation in texture with their crunchiness. The spicy hint provided by the chilli flakes rounded off a nicely balanced pizza.

£20 doesn’t buy you proper crockery, just paper plates. But I can live with that.

Can you see any bone marrow? No, neither can I.

The massive pizzas at Homeslice are great for sharing, but the quality of the topping combinations aren’t consistently excellent which is worrying given the small size of the menu. Surprisingly, the vegetarian pizzas I tried were better and more accomplished than the meat ones. A great meal can be had, but only by pot luck or if you choose carefully which limits Homeslice to a three star rating and a cautious recommendation rather than a more enthusiastic one.

Reservations: essential but only taken for groups of five to ten people.

Average cost for one person including soft drinks and service: £25 approx.