Disclosure: The Picky Glutton was invited to review this restaurant and the meal in this review was prepaid for by the restaurant in the form of an unsolicited voucher.

As a general rule I’m not fond of eating out at chain restaurants in London. With so many interesting independents to choose from in the capital, picking a chain, especially one of the big national or multinational behemoths which can be found almost anywhere else in the country, seems like a wasted opportunity. It’s not a hard and fast rule though and every once in a while I come across a chain that I like – Rossopomodoro is one of them.

Rossopomodoro has just six branches in London with an outpost in Birmingham. I visited the Covent Garden branch, the site of the old Gili Gulu kaiten sushi buffet restaurant, with Wicket in tow. The place is moodily lit with a kitchen-like appearance to it, while the service was polite and efficient.

Wicket started off with the Parmigiana, which could be described as an Italian moussaka if you’re a culinary reductionist. A large heap of aubergines, which hadn’t been overcooked so they weren’t too mushy, was topped with a creamy, oozing layer of mozzarella that added a light smokiness to the dish. 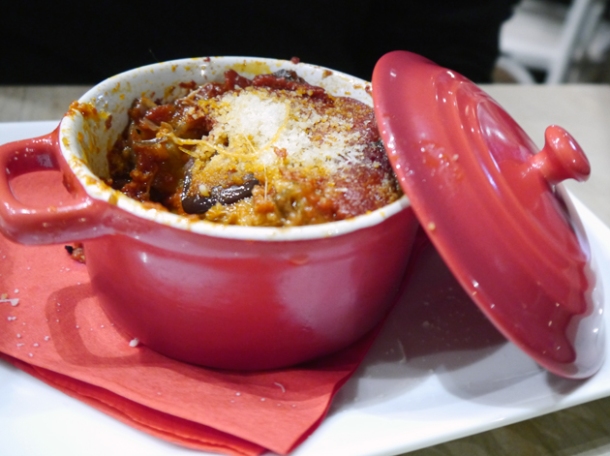 I went for a platter of cured meats as my starter. The chorizo-esque salami was forgettable, but the nutty and earthy bresaola and fatty, delicate parma ham hit the spot nicely.

Wicket was clearly intent on having an aubergine bender, as eggplant turned up again on his Verduretta pizza. The standout topping on this pizza was the seared courgettes though. Their charred creaminess was complimented well by the sweet and vibrant tomato sauce as well as the sweet creaminess of the mozzarella.

My Carmelo pizza used the same base as the Verduretta – a lightly crisp crust giving way to a softer, floppier center. It’s not quite as fluffy, light and sweet as the bases used at Franco Manca, nor is it as firm as the ones used by Pizza Pilgrims, but it’s still a good, evenly cooked foundation for the various toppings. My pizza was a touch greasy, but the fennel-flecked flavours of the sausage melded well with the bitterness of the rapini broccoli. The absence of tomato sauce, making this a bianca pizza, allowed the light smokiness of the mozzarella to shine through.

Both Wicket and I opted for the Pastiera for dessert. This cake almost resembled a cheesecake in its moistness, while bits of candied orange added a sweet, zesty flavour.

Some of the most distinctive items on Rossopomodoro’s menu are the soft drinks. There’s our old favourite, the limonata. This Italian lemonade is zingy without being excessively sweet or overly sour. Even better is the Chinotto Lurisia, a soft drink made from the fruit of the myrtle-leaved orange tree. The bitter, sour and refreshing taste is somehow reminiscent of grapefruit, candy floss and liquorice all at the same time. 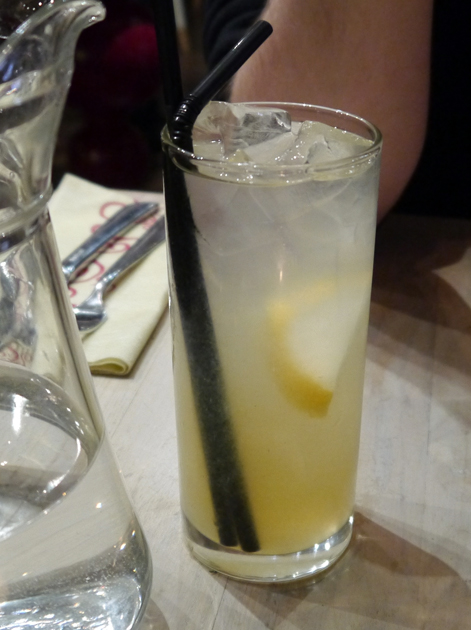 Where have you been all my life?

Rossopomodoro may not be the trendiest pizza place in London, but it’s still surprisingly good with some interesting desserts, starters and soft drinks to compliment the tastefully prepared pies.

Total cost for one person including soft drinks when shared between two people: £30 approx.

6 thoughts on “Rossopomodoro review – is this Covent Garden pizza chain the weakest link?”