Taipei is a pretty cheap place to eat out, at least by Western standards, with many of my meals costing around £10 or less. One of the more expensive meals that Templeton Peck and I had was at Tian Xiang Huwei, a restaurant that apparently serves Mongolian hot pot. The authenticity of the Mongolness here is suspect, especially as hot pot is widespread throughout many South East Asian cuisines. The restaurant’s garish getup and the folksy costumes worn by the staff don’t inspire confidence. 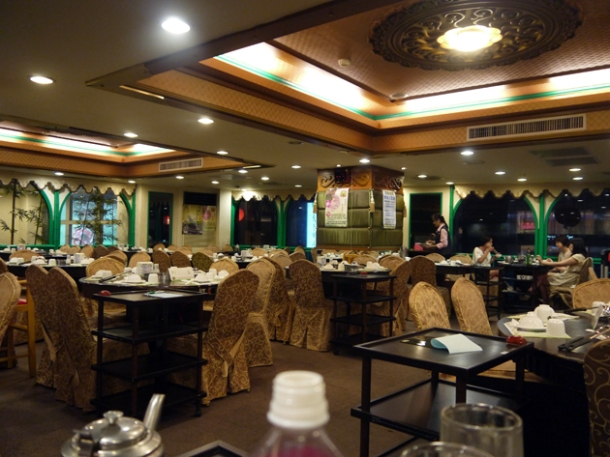 Clearly modelled on the interior of Genghis Khan’s tent.

Finding Tian Xiang can be a little tricky, especially as it’s located on the second floor of its building and the signage is in Chinese only – look for the restaurant’s distinctive red and green logo. The staff don’t speak much English, but they are friendly and the menu has photos and basic English descriptions.

With Asian-style hot pots you order a bubbling cauldron of boiling flavoured broth and several plates of raw ingredients. You then dip the food into the broth to cook it before eating it. The broth can usually be consumed as well. Here the cauldron is split into two so you can have two different types of broth.

The translation of the broth section in the menu made no sense whatsoever so I just pointed at the two most expensive ones. The result was a spicy, peppery red broth on one side and a surprisingly fruity, herby broth (described as ‘medicinal’ on the menu) on the other.  The bold flavours of both were easily soaked up by our chosen noms. 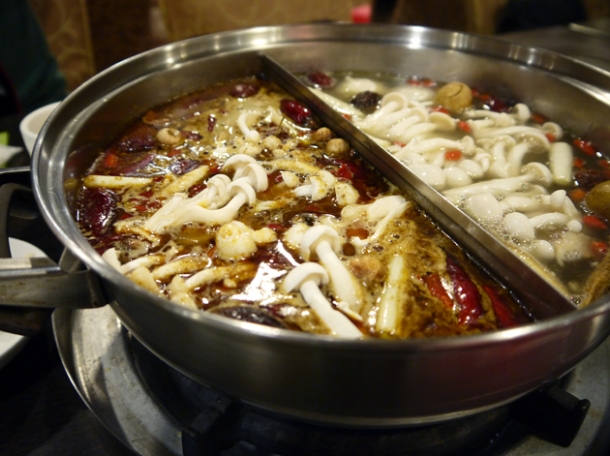 Putting the hot in hot pot. 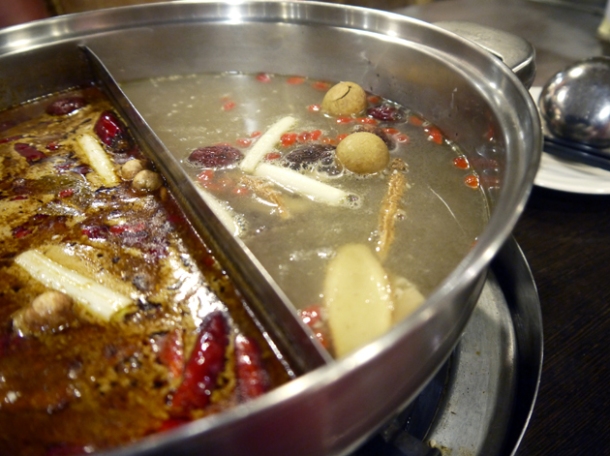 Take six times times an hour with meals. Do not drive or use complex machinery at the same time. 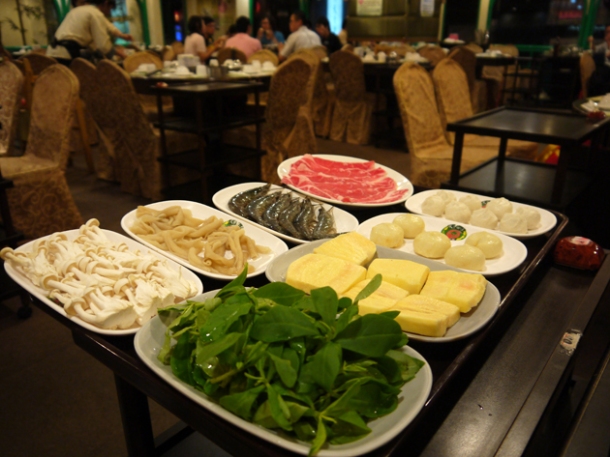 Surprisingly, we hadn’t over ordered.

The king prawns were fresh, large and plump making it difficult to wait for them to cool down after they’d emerged from the broth so one could tear off the shells. 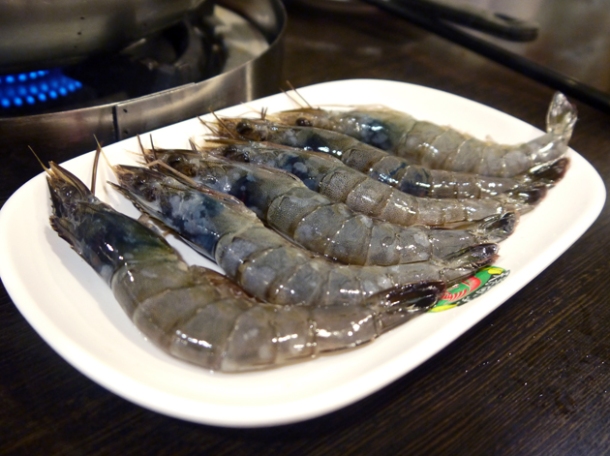 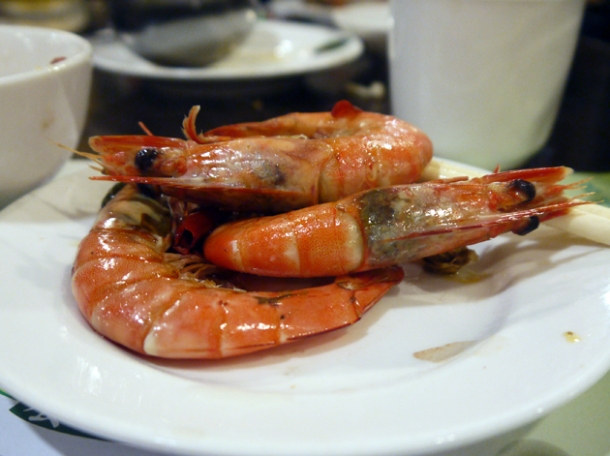 All hail the kings.

Fresh bitter greens provided one of our five a day. The other came in the unexpected form of sweet potato which, as a South American vegetable, suggests that our hot pot wasn’t quite as authentically Mongolian as we would have hoped but it was satisfyingly tasty dunked in either broth. 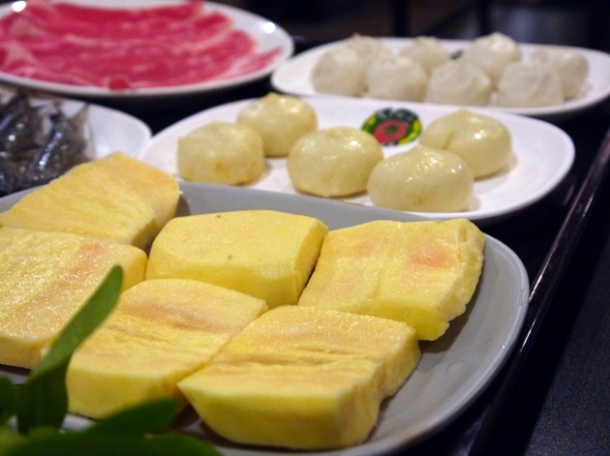 The slices of fatty beef went down a treat and tasted best when dunked in the spicy, peppery broth. Just as good were the slices of goose heart which, despite their thinness, were surprisingly dense and hearty (pun intended). I forget which animal contributed their intestines to our meal, but if you’re a fan of offal then you’ll enjoy these wrinkly, slightly chewy pieces. 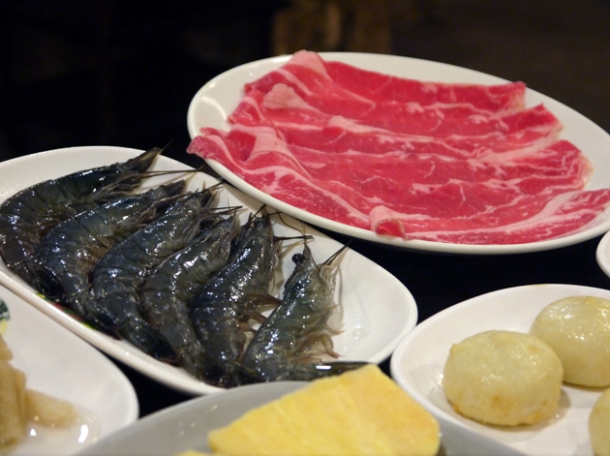 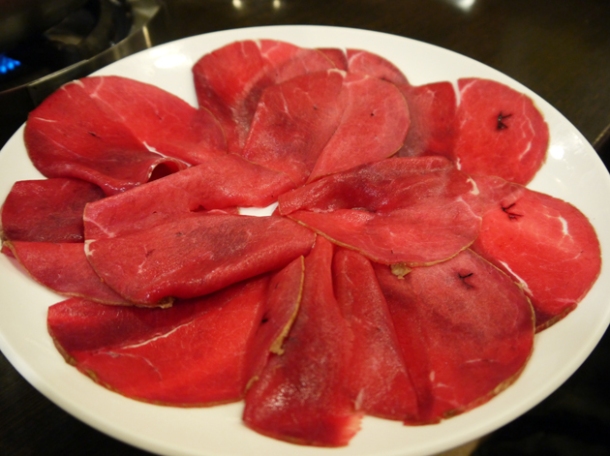 Pouring my heart out. 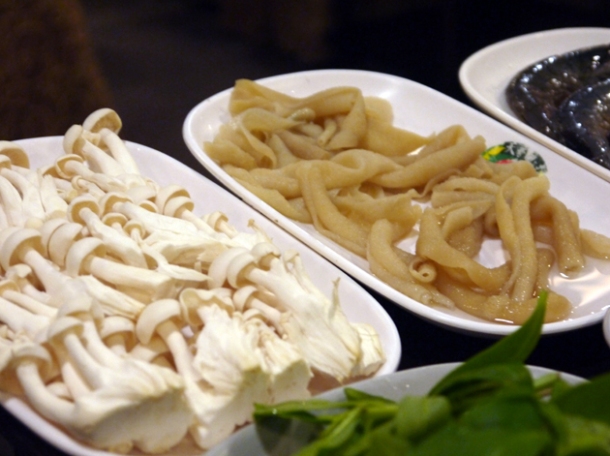 Mushrooms to intestines – ‘I hate your guts’. 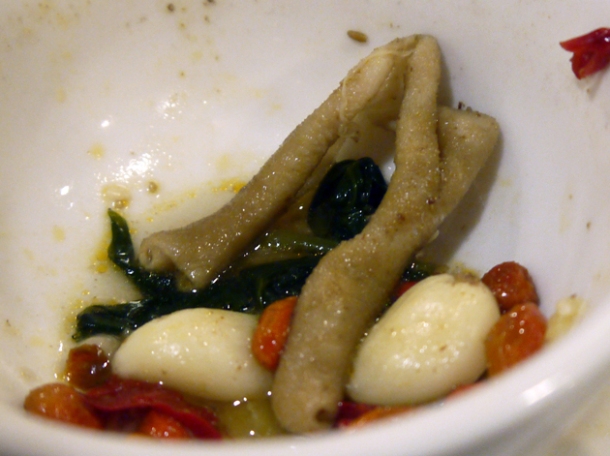 The enoki mushrooms were firm yet slippery and were best enjoyed in the medicinal broth – they lost some of their gentle earthiness when dunked in the spicy broth.

The highlight of our meal were the Mongolian dumplings. The thick, doughy, slightly chewy skins held a small amount of moreish soup and either a hearty meatball or fishball at its centre – they’re superficially similar to the xiaolongbao at Din Tai Fung. Care is required when eating them – a squirt of hot soup hit Templeton Peck in the eye when he accidentally pierced a dumpling skin (much to the amusement of the onlooking waiters). 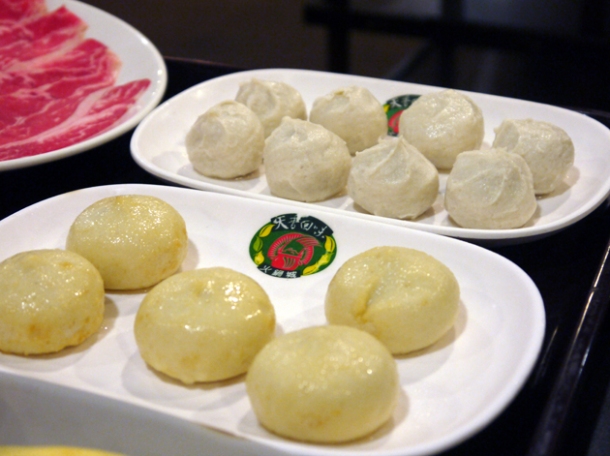 Out to conquer the known world? Best have some of these before you go. 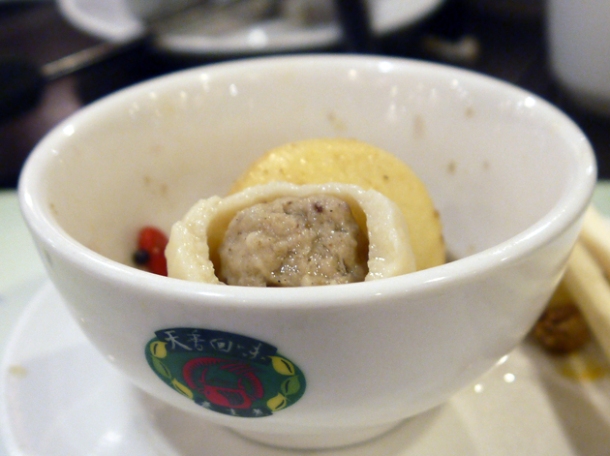 Hint: don’t get any in your eye.

We didn’t order dessert, but we got some anyway in the form of grass jelly – sweet, mildly herby cubes of jelly served in a thin, mildly sweet syrup. Not bad at all, although it’s something of an acquired taste. 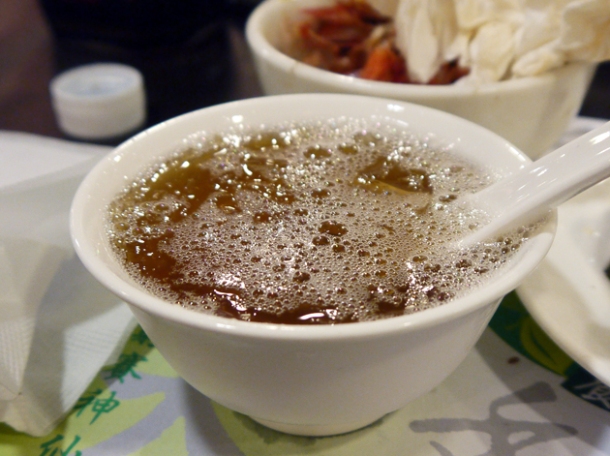 The Mongolian hot pot at Tian Xiang may not be very Mongolian, but it is simple, tasty and very satisfying. If you’re in Taipei as part of a group, this convivial meal is a must.

Reservations: yeah if you want

Total cost for one person including drinks when shared between two people: NT$2,860 (approx. £30 at time of writing)