I sometimes find myself visiting the most obscure restaurants in the course of writing this blog. Malibu Club is a prime example – this little known second floor restaurant, sat above a dodgy-looking bookshop, is a short walk away from Edgware Tube station which is right at the northernmost end of the Northern line.

Wicket and I found ourselves there on a Saturday night due to the insistent recommendation of a mutual friend who lives locally. The dining room filled up very quickly even though it looks like a cross between a cafeteria and a doctor’s waiting room. Service was sluggish, but friendly and reasonably well-informed about the tersely written menu which seems to have some dishes originating from the Indian diaspora in Eastern Africa. 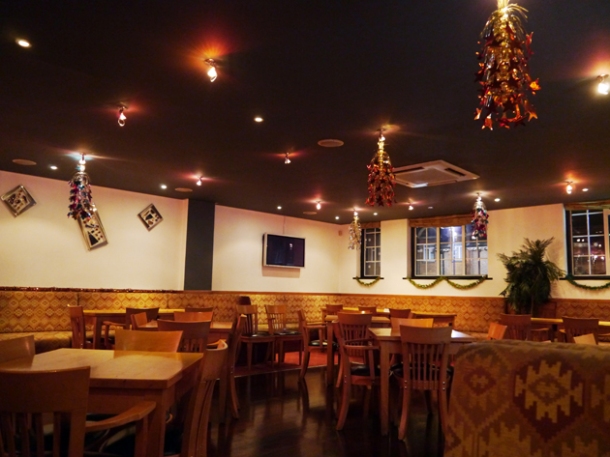 I really hope the actual Malibu doesn’t look anything like this.

Wicket and I shared a smorgasbord of starters including the chicken wings which our mutual friend wouldn’t stop gibbering about. I failed to see the attraction though – the wings were slightly crispy and had a mildly numbing tabasco-like heat to them, but they can’t hold a candle to the exceptional confit chicken wings at Patty and Bun. 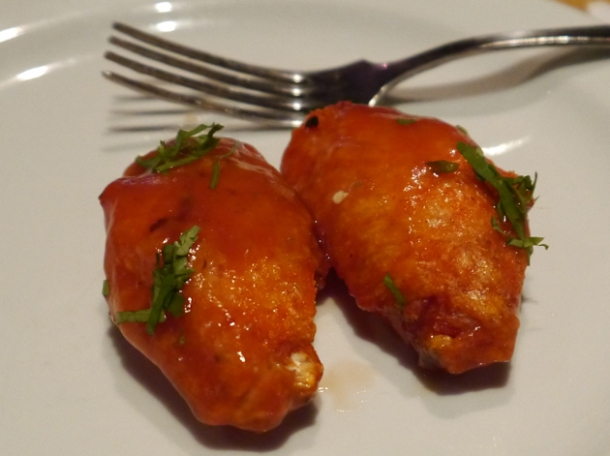 Not what I expected from an Indian restaurant in Edgware. Then again I had no idea what to expect.

The masala fish was even less impressive. Small blobs of generic white fish in a rather bland, forgettable and tasteless masala coating. 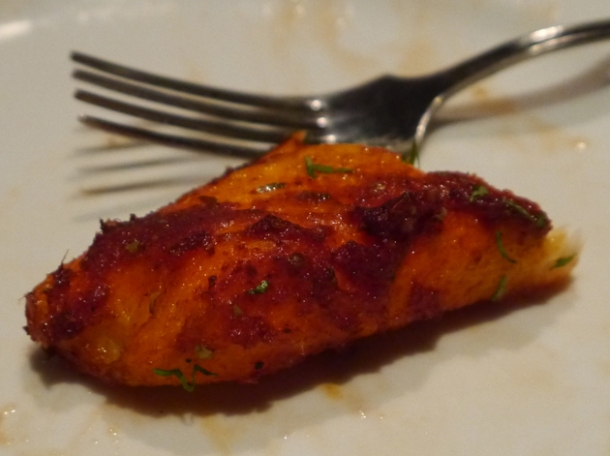 This fish should’ve been thrown back.

The lamb sheekh kebabs were moist, but they had a slightly astringent taste to them that was a little unpleasant. 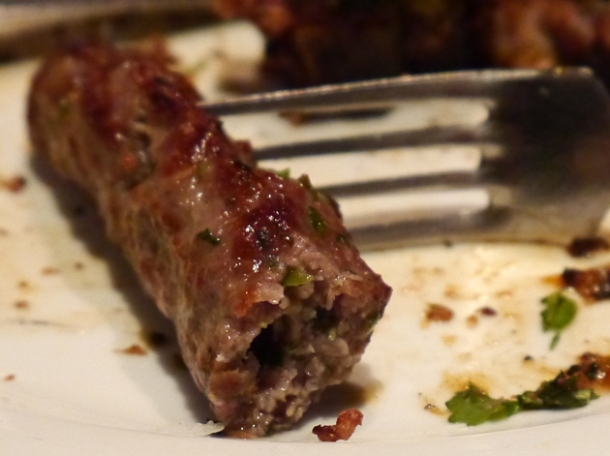 Our starters weren’t a complete loss though. The cubes of paneer had a fiery, peppery heat to them while the softness of the cheese was balanced out nicely by the crispness of the spring onion garnish. 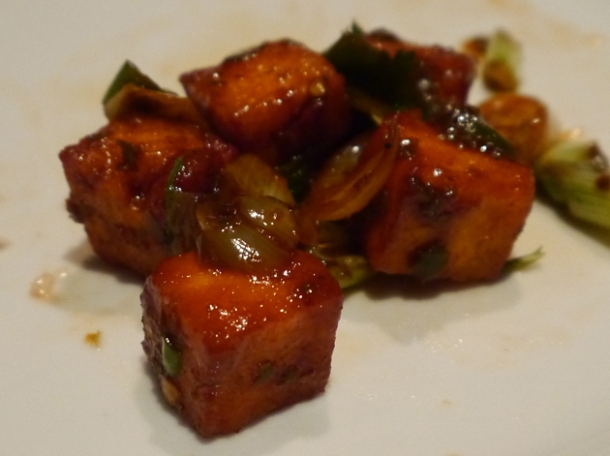 I was disappointed by the relative toughness of the lamb chops, but their charred smokiness made up for this to a certain extent. 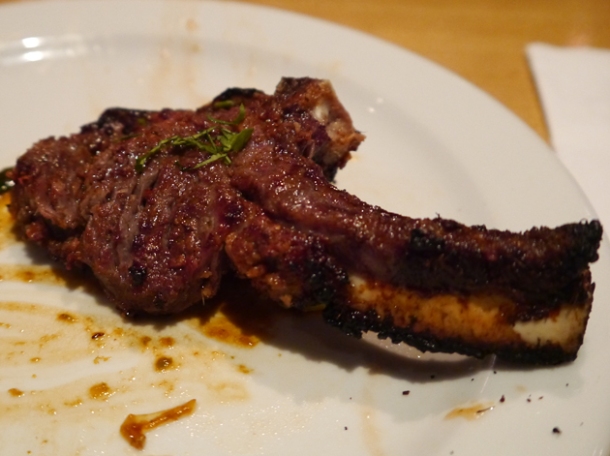 Have you got the chops?

The oddest starter had to be the garlic mogo – chips made from cassava instead of potato. The soft, slightly leathery chips were a little lighter than the average potato chip and had a reasonably strong garlicky taste too. 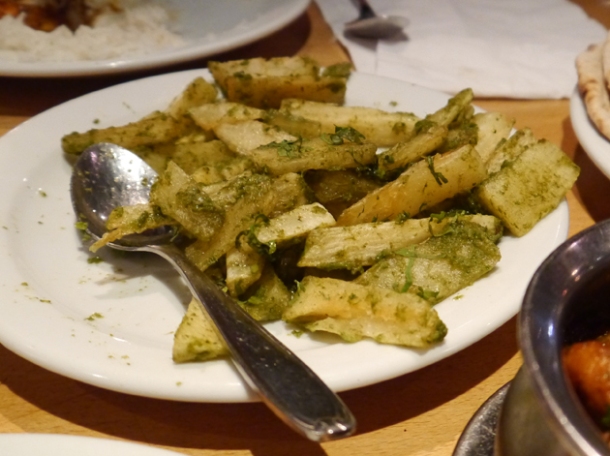 After overdosing on starters, we moved onto main courses. Wicket opted for the daal chicken curry where big chunks of poultry and a generous helping of lentils were served in a mild, thankfully unoily sauce. I couldn’t quite identify the beans used, but this was still a hearty, satisfying dish. 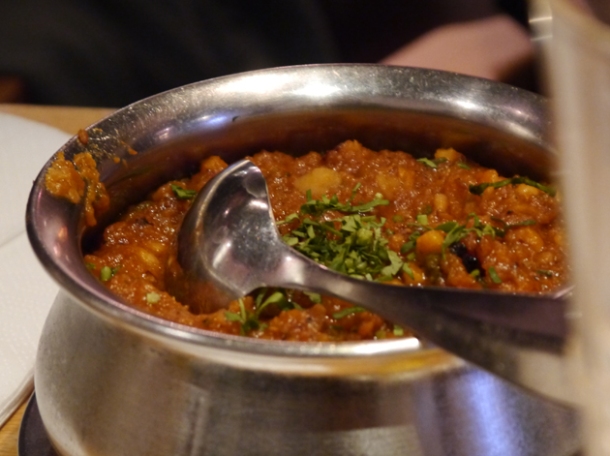 This photo is a bit pants… 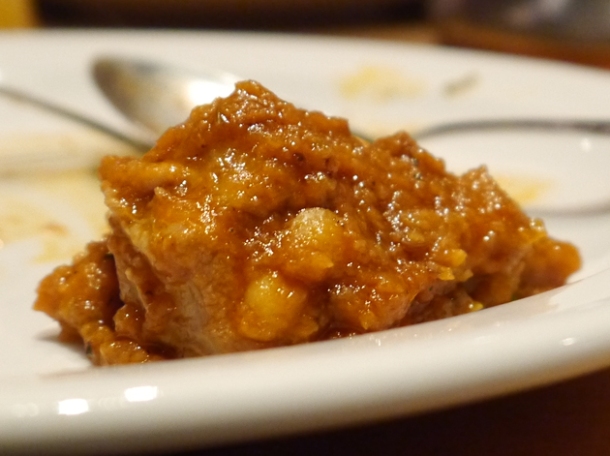 I opted for the methi chicken, a chicken curry flavoured with lots of sour, slightly bitter fenugreek. Although the taste of the fenugreek won’t suit everyone, I enjoyed it – it went especially well with the tingling, moderately hot spiciness of the sauce. 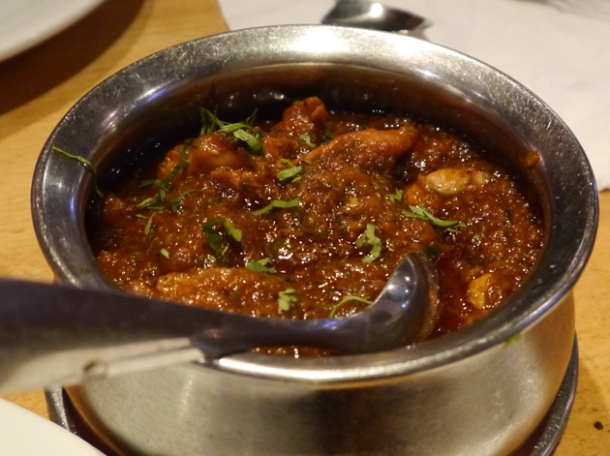 Wicket and I also shared a portion of crispy okra. Although moderately spicy, this bindi turned to be more leathery and soft than crispy. 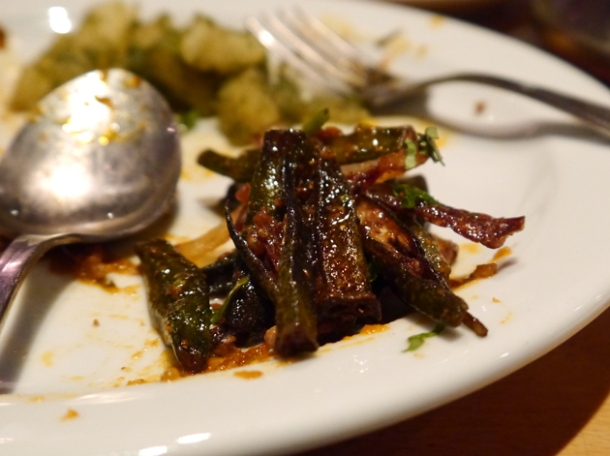 How is this place a club? Did I somehow sneak in without paying a membership fee?

We mopped up our curries with some relatively thick, slightly chewy roti. It wasn’t quite as soft and pliable as I was expecting, but it was good enough. 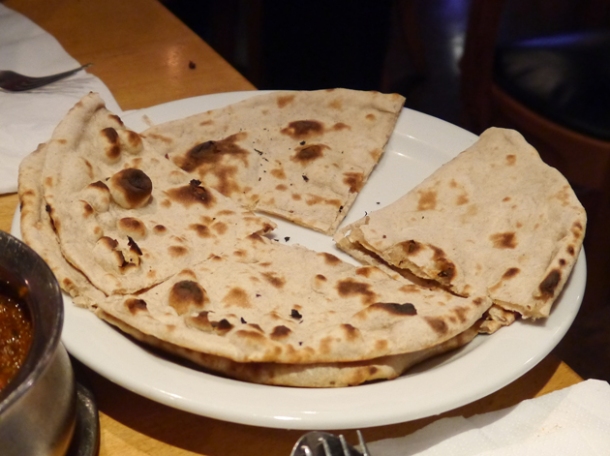 Despite its unusual location and drab appearance, Malibu has potential especially with some of its more unusual dishes. There are quite a few duffers and simply mediocre dishes on the menu though which, for now at least, makes Malibu an interesting diversion for Edgware locals rather than somewhere worth travelling for.

Web: http://www.malibuclub.co.uk (not working at time of writing)

Average cost for one person excluding service but including drinks: £25 approx.