Eat, drink and be merry?

At the risk of stating the obvious, eating out with a large group is a very different affair from dining by yourself or with a small group of friends. Finding a restaurant with enough covers (in this case for 30 people), that isn’t too expensive, doesn’t have onerous booking requirements and yet has a menu that’s both of reasonable quality while remaining ‘safe’ enough for the gastronomically challenged in the group can be a mind-numbing endeavour.

Kitchener and his work chums ended up at The Crown and Two Chairmen and had food that they charitably described as ‘vomit’. Templeton Peck, Higgs Boson, Socialist Worker and I ended having a more satisfactory time at Belgo Centraal with our work chums. This Covent Garden branch of the Belgian mussels and frites chain requires a very reasonable £5 deposit per person. Once booked the restaurant has to be informed of any no-shows seven days in advance or the deposit for that person will be forfeit.

Belgo Centraal’s cavernous underground dining room, which has a semi-industrial, semi-monastic feel to it, had more than enough room for our large gaggle of tanked up office workers and the loud, boisterous atmosphere certainly lends itself to large group dining during the festive period. 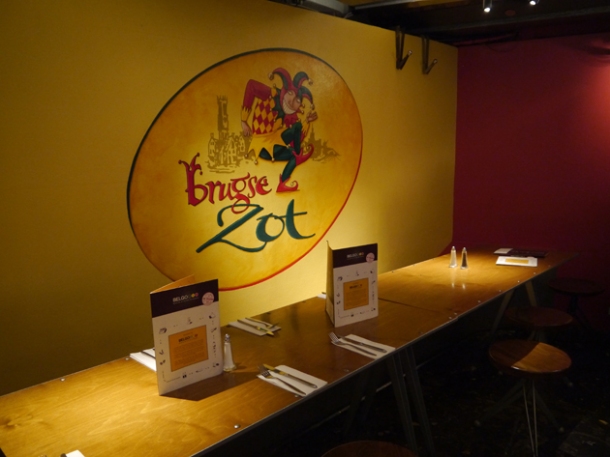 Our tables were obviously a lot bigger than this.

As a group we all opted for the £20 per person two-course Festeen set menu, which contains many dishes from the usual everyday menu. Even so, the kitchen was flexible enough to accommodate the needs of the work chum with awkward dietary requirements (and yet somehow failed to mention them when Higgs Boson made the booking six weeks before). Service was reasonably efficient, although the waiters relied upon each diner remembering what they had ordered which can be a tall order after a few bevvies.

Embarrassingly, Templeton Peck, Higgs Boson, Socialist Worker and I opted for almost exactly the same set of dishes. Socialist Worker, Peck and Boson were happy with the  starter of Thai-style mussels, but I thought the lemongrass, coconut and coriander flavour was muted and could have been stronger. The mussels themselves were fine, but they were a bit on the small side and lacked the pungent seaside aroma that can help make mussels particularly enjoyable.

Belgo need to exercise their mussels a little more.

Socialist Worker opted for the ‘seared’ salmon as his main course. The skin was crispy and the fish was competently cooked, if utterly unremarkable. The champagne sauce was thin and moderately creamy, although there was hardly any hint of booze to it and did little to complement the fish. The julienned vegetables were a little limp.

What you can’t see in this photo are Socialist Worker’s exceptionally shiny shoes.

Templeton Peck, Higgs Boson and I all opted for the beef cabonnade, a traditional Flemish beef stew. The sauce was a bit watery, but it had a pleasantly sharp, fruity taste courtesy of apples that complimented the tender chunks of beef well. There was also a pair of soft, squidgy, distinctly flavoured prunes in the sauce. Higgs Boson wasn’t a fan of them and they stuck out rather than blending in with the rest of the dish but I still wished there were more of the tasty little blighters. 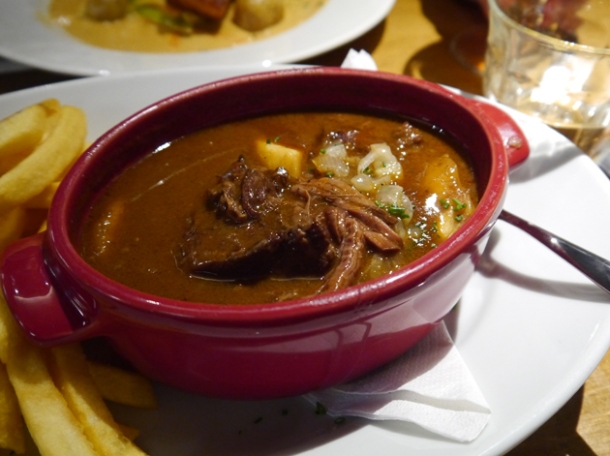 The accompanying fries were oil-free and reasonably crisp, although the golden colour was a little faded and some were a little bitty on the inside. The most interesting thing that can be said about the bread basket is that it came with a small pot of mayonnaise instead of butter. 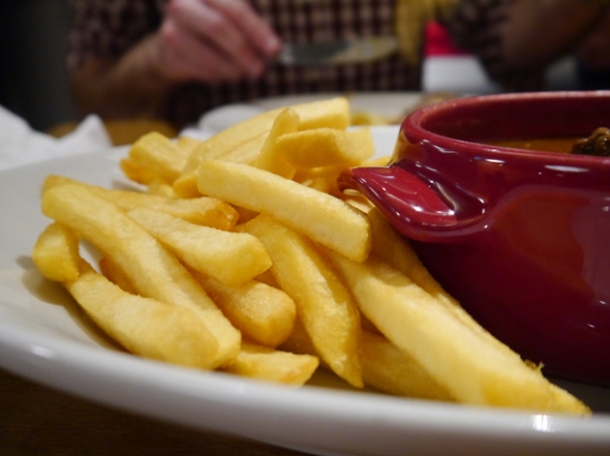 Belgo has a large selection of beers available. Templeton Peck and Socialist Worker passed over The Euro Hedgie favourites of Chimay, Duvel and Leffe in favour of Rochefort 10, a sweet and strong brew.

Group dining at Belgo Centraal isn’t about the food, which was satisfactory at best and mediocre at worst. Indeed, the so-so quality of the food is exactly what’s needed when eating out with a large group – it’s good and affordable enough to please almost everyone, but isn’t bad enough to offend gastrosnobs like me. Along with the large tables, a boisterous atmosphere, sensible booking conditions and reasonably competent service, Belgo has everything to ensure a fun night out for a large group. Long may its undistinguished unexceptionality continue – we might be back again next Christmas.

Set menu cost for one person excluding service and drinks: £20