Having eaten my way through almost the entire menu, is this domiciled food truck really a bountiful BBQ bonanza?

Pitt Cue is a new barbecue restaurant in Soho, just around the corner from Carnaby Street, but it originally started out as a truck underneath Hungerford Bridge on the South Bank. Despite these humble origins, the new Soho Pitt Cue has been one of the most eagerly anticipated restaurant openings of the year due to its low prices and the poor/mediocre quality of other London barbecue restaurants. 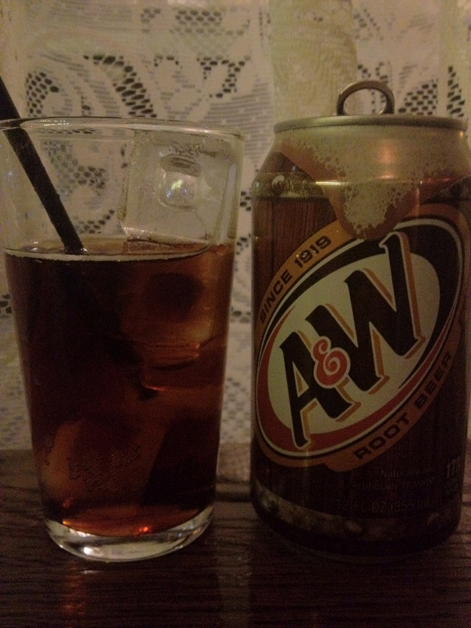 Root beer! In a London restaurant! OK, it’s only A&W root beer, but I’ll take what I can get.

Visiting Pitt Cue does require a bit of advance planning though. Reservations aren’t taken and the the tiny number of 30 covers, split between bar seating on the ground floor and a handful of tables in the basement, are snapped up quickly. The small space is undoubtedly cramped, but when combined with the blues music, dim lighting and numerous varieties of bourbon available on the fairly lengthy drinks menu, a generally convivial and clubby atmosphere emerges.

Most of the tables in the basement seat two. The lone table for four is almost literally underneath the stairs.

While the drinks menu has a wide array of cocktails and bourbon to choose from, the food menu is short and to the point. All the meat dishes come with pickled vegetables, a crusty chunk of bread and your choice of side dish for around £10. More meat or sides, as well as a small selection of ‘extras’ and desserts, cost just a few pounds more. Apart from a rotating array of daily specials, such as pig’s head or sausages, there are four meat mains – pulled pork, beef brisket, St. Louis pork ribs and beef ribs (the first two are also available served in buns). Given the small menu and the numerous visits I’ve made to Pitt Cue, this review will follow the structure of the menu itself rather the course of my individual meals. Without further ado…

Pulled pork is a deceptively simple dish of pork slow-cooked over a barbecue so that the meat becomes tender enough to be ‘pulled’ apart, but it’s difficult to do well as the paucity of good pulled pork in London attests. Thankfully Pitt Cue’s version doesn’t disappoint – tender, moist strands of meat with a sweet, gently smoky flavour that doesn’t have the sickly artificiality that often plagues Bodean’s version. Good stuff. 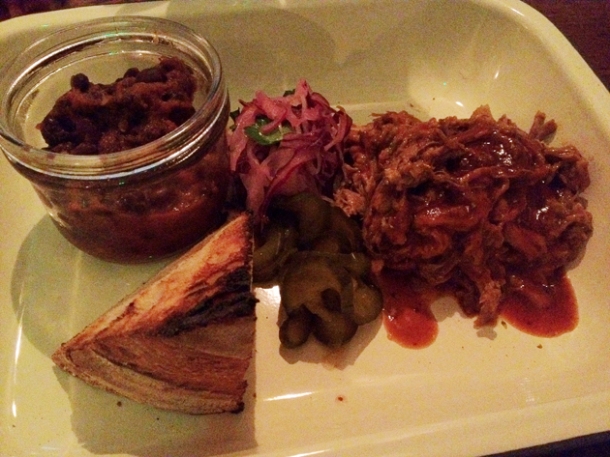 Sorry for the grainy photos in this review folks – this is what happens when you get a phone to do a camera’s job in dimly lit conditions.

The beef brisket isn’t quite as accomplished as the pulled pork. The brisket has a grainy appearance and a flaky texture to it, as well as a gently smoked flavour similar to that of the pulled pork. It’s at it’s best when you bite into a streak of fat or tenderised collagen, but these were sadly few and far between in my serving. Although it’s more satisfying than other attempts at beef brisket in London, it doesn’t have the same visceral fattiness and saltiness as the best US versions. Still worth having at least once though. 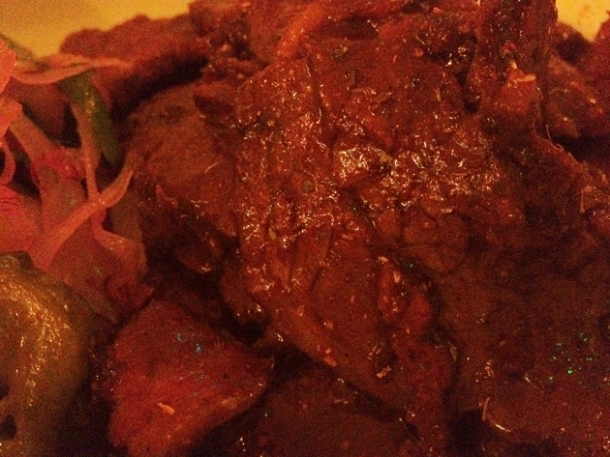 If you’d rather have your pork on the bone, there’s the St. Louis ribs. The strips of meat are incredibly tender and can be sheared off the bone using your teeth with minimal effort. Even more remarkable is the sweet, tangy molasses-like flavour which really is reminiscent of the ribs I had in the city of St. Louis itself only a few months ago. The tanginess could be bolder, but overall very satisfying.

As good as the St. Louis ribs are, they’re overshadowed by the beef ribs. Although they’re not as meaty or as fatty as the pork ribs, they’re not worse off for it. The lovely moist bits of collagen and slightly chewy connective tissue are very addictive. The rest of the meat is a touch on the dry side, but the lovely woody, smoky flavour more than makes up for this. 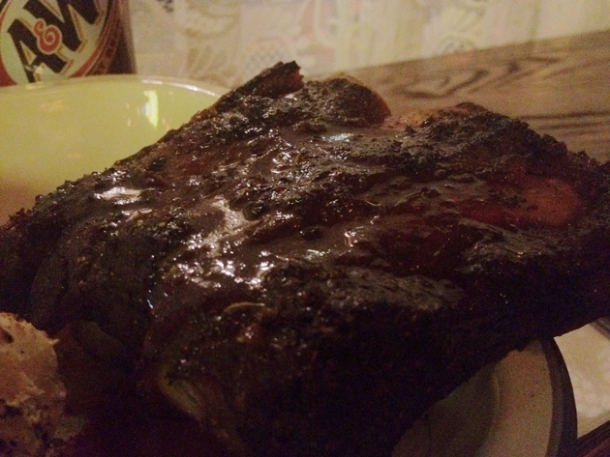 Fred Flintstone wants his dinner back.

Ignoring the baked beans in favour of one of the other side dishes would be understandable, but it’s worth giving them a chance – these aren’t your typical tinned baked beans in luminescent orange tomato sauce. The soft beans have been cooked in ham stock and come with flecks of pork mixed in. They taste sweet and mildly tangy – their moreishness grew on me the more I ate. 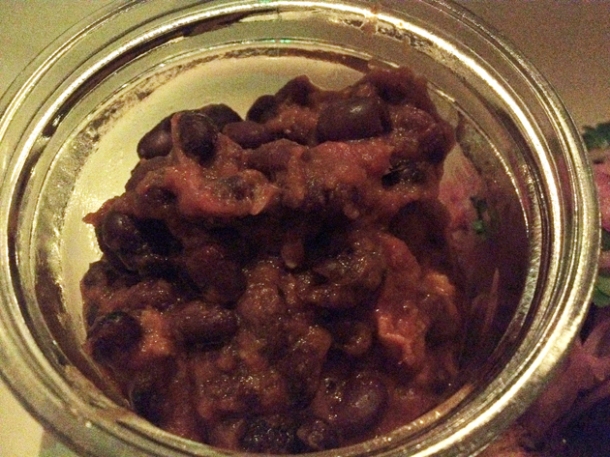 Everything comes served in jars or on metal plates.

Sprouts don’t come to mind when one thinks barbecue. The braised sprout tops here start off with a very buttery, salty taste, but this quickly gives way to the usual bitter flavour which seemed to increase in intensity as I worked my way through my serving. The green leaves have just the right amount of firmness – neither too soft nor too stiff. Still, if you’re not a fan of Brussels sprouts, Pitt Cue’s version won’t change your mind. 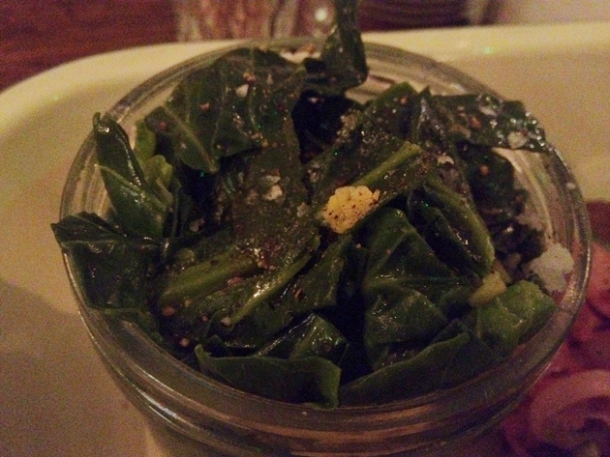 The hock, beets and pickle salad sounds intriguing and unusual, but it’s nothing more than ham hock mixed in with pickles and thin slices of pale red beets. While the juicy, tender and very meaty strands of hock are complimented well by the pickles, the beets are surprisingly muted and add little to the dish (sorry folks, no photo of this one).

The vinegar slaw is essentially the same as the pickled white and red onions you already get with each helping of meat, but the burnt end mash is something else entirely.  Although it looks like a demented tiramisu cooked up by Yosemite Sam, the smooth mash is made memorable by the lightly smoky, slightly chewy burnt ends which almost resemble beef jerky in their flavour and texture.

Why do I keep typing vinegar as Virginia? 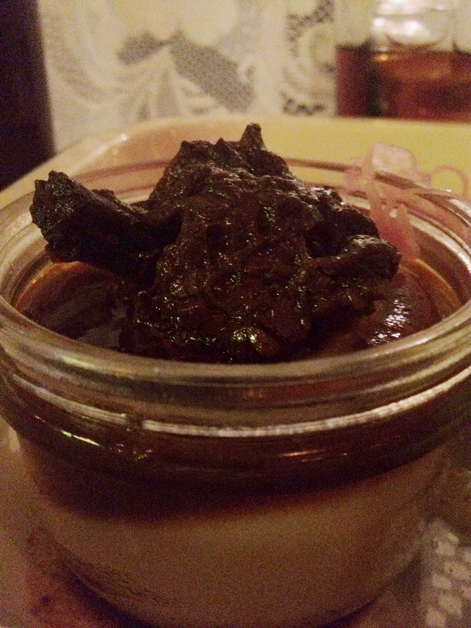 All mashed potatoes should come with burnt ends.

Pickled vegetables dominate the small selection of Extras at Pitt Cue with good reason – their refreshing tartness is much needed after a comparatively heavy dose of smoked meat. The jar of pickles contains numerous pickled vegetables, but the clear stand-out are the pickled shiitake mushrooms which are a revelation. The soft, delicate texture and taste of the mushroom has been preserved, but with an added sharp sourness that compliments the richness of the mushroom rather than ruining it or overwhelming it. If I could just have a jar filled with just pickled shiitake, I would be a very, very happy Glutton.

The pickled shiitake mushrooms pop up again, this time as the star of their own Extra dish. Here, they’ve been battered and deep fried. The crispy, remarkably unoily batter gives way to reveal the soft mushroom underneath with its rich, buttery, sour flavours intact. Marvellous.

This is quite a pickle we’re in.

Almost inevitably, the smoked hot wings with pickled celery aren’t very satisfying. If you’re not a fan of spiciness, then you have nothing to fear from these hot wings – they’re very mild with only a slight spicy kick in the aftertaste, although the tingly numbing sensation on your lips does accumulate as you eat more wings. The soft chunks of pickled celery are sharp and sour, but this effect, like the spiciness of the wings, is rather muted. The kitchen would do well to offer a more kick ass version of this dish.

Celery. The under appreciated vegetable.

As of this writing there are only two desserts at Pitt Cue and I wasn’t expecting much from either of them given the small size of the kitchen which is just visible from some of the basement tables, but I was pleasantly surprised by both of them. I’m not sure if they’re prepared onsite or brought in from elsewhere, but there were some surprising variations in each dessert.

Pitt Cue has given sticky toffee pudding a slight twist. On my first sitting the cake was moist and slightly chewy, especially around the edges, and the chewy, plump bits of prune added some delightfully syrupy sweetness. The toffee sauce and ice cream were surprisingly bland though. 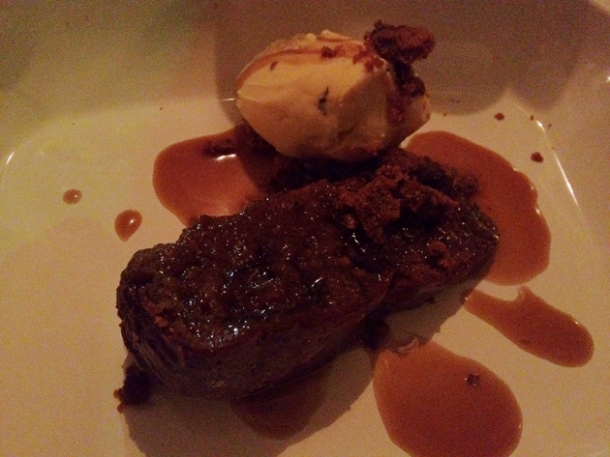 There was almost a complete reversal when I tried the sticky toffee pudding a few nights later – the cake was much softer and lost much of its chewiness, while the prunes were saldy entirely absent. The toffee had gained a noticeably boozy bourbon kick though and the ice cream was rum and raisin flavour. If Pitt Cue can combine the best elements of both then it would be onto a winner.

There’s no rhyme or reason to rum and raisin.

The rhubarb mess, on the other hand, came close to being an unqualified success. The quivering pink slivers of rhubarb have a lovely sharp and sour taste that’s not buried underneath a mass of cream, but instead sits in a gently sweet and fruity sauce. The chunks of meringue are crisp and break apart easily, providing a contrast in texture without getting in the way with excessive crunchiness. There may be problems with consistency though as on one subsequent occasion the rhubarb was a little too soft for my liking, but making up for it was the surprise addition of ginger in the bottom of the glass adding a nice spicy finish to the dessert. 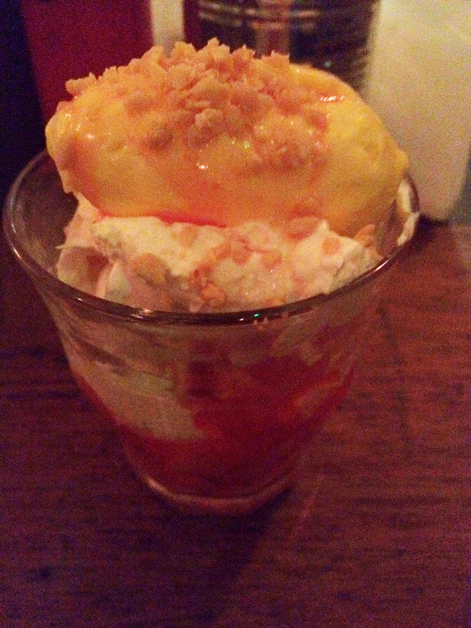 It would be easy to complain that the BBQ meat at Pitt Cue isn’t quite as good as the best barbecue joints in the US. While that’s true, it’s still far superior to any other attempt at American-style barbecue I’ve had so far in London and at bargain prices too. Plus, the brains in the kitchen are concocting dishes you’re unlikely to see at other barbecue restaurants from bourbon-infused sticky toffee pudding to all sorts of pickled vegetables and a constantly changing array of evocative specials.

In other words, if you like barbecue then there should be nothing stopping you from eating at Pitt Cue – apart from the size of the queue.

Reservations: not taken (so arrive early or bring an attractive female friend).

Total cost for one person including dessert, soft drinks and service charge: £23 approx.