Chinese food turns over a new leaf or just the same old stuff?

An increasing number of sleek new southeast Asian restaurants are popping up in Holborn and one of the latest is Greenleaf, a new Cantonese restaurant just down the road from Korean eatery Kimchee. It’s located on a side street, so you’d have to be specifically looking it for as you’d never stumble across it otherwise. The decor differs from your average Chinatown grub hole with marble-effect tables, plush seating and even some eye-catching motorised lamp shades that resemble blooming flower petals. There are even karaoke facilities which immediately piqued Sue-Ellen’s interest, but no-one was drunk enough for that sort of thing on our weekday lunchtime visit. The service is thankfully much friendlier than the Chinatown standard, but no less efficient.

Pretty as a petal.

Although the food at Greenleaf is generally Cantonese, there are at least a couple of Sichuanese, westernised and contemporary dishes on the menu too. Unfortunately, since I was dining with Ball Breaker and Sue-Ellen, some of the dishes chosen for our lunch were tediously unadventurous, but at least Luthor was there to back me up with some interesting menu choices.

It’s customary for any group of people dining at a Chinese restaurant (especially those groups where just three people manage to imbibe three glasses of dry white wine and five bottles of Tsingtao beer between them and then insisting on going to the pub afterwards), to have spring rolls and crispy duck for starters and despite my best efforts this occasion was no different. The spring rolls were thankfully not too oily or greasy and were quite crisp too, but the sweet chilli dipping sauce was generic and forgettable. Slightly more interesting was the vegetable filling which had a savoury, taro-esque flavour to it. Overall though, an unremarkable starter.

These rolls didn't put a spring into my step.

The crispy duck, served with the usual plum sauce and pancakes, was similarly unimpressive. Although cooked in the Sichuanese style according to the menu, it lacked the slightly smoky flavour I would associate with Sichuanese duck and tasted more like the dry westernised duck that’s shredded and stripped of flavoursome fat that will be familiar to anyone who’s ever been had a takeaway in Britain. The only redeeming quality was the crispy bits of skin which had a taste reminiscent of five spice powder. Some proper Beijing or Cantonese-style roast duck would’ve been much more satisfying.

Ball Breaker was adamant about ordering sweet and sour pork. There’s little that I can say about this deplorably mundane anglicised dish that hasn’t already been said. 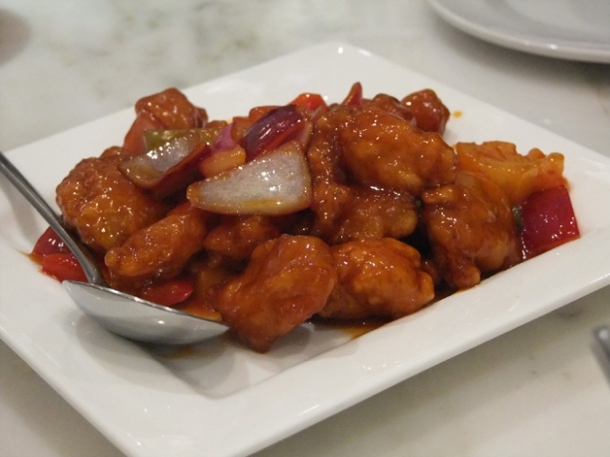 Thankfully Luthor was a little more adventurous with his pick of steamed tiger prawns served here with some very mild chilli and soy sauce on a bed of vermicelli noodles. The noodles were zesty and firm which is more than can be said for the prawns which were overcooked so that they were far too soft, losing much of their flavour and texture.

Don't go all soft on me now.

Sue-Ellen had high hopes for her sliced pork belly stir fried with peppers and spring onions in soya sauce. Sadly we were both disappointed with this dish – the thin slices of pork were bland and the thin, almost non-existent strands of pork fat certainly didn’t help.

The most unimpressive pork belly dish I've ever had.

In retrospect I should’ve chosen a dish other than the beef brisket claypot since our meal was already quite meat heavy. In any case the tender chunks of meat were boldly flavoured with a hearty stock and lots of ginger and turnip chunks, although some offal would have added some much needed variation in texture.

What a brisket case.

None of my dining companions had room for dessert, but I was intrigued by the appearance of French macarons on the menu. The coconut macaron was far more intensely flavoured than the meek chocolate and pistachio versions, but all three were far too chewy. I’m no longer a regular tea drinker, but the accompanying glass of tea struck me as remarkably tasteless which is even more of a shame than the substandard macarons given China’s long tradition of tea drinking. The kitchen at Greenleaf is probably too small for a real dessert chef, but if the proprietors are going to insist on having desserts they should draw on the rich pudding heritage of China, rather than relying on a Parisian staple. 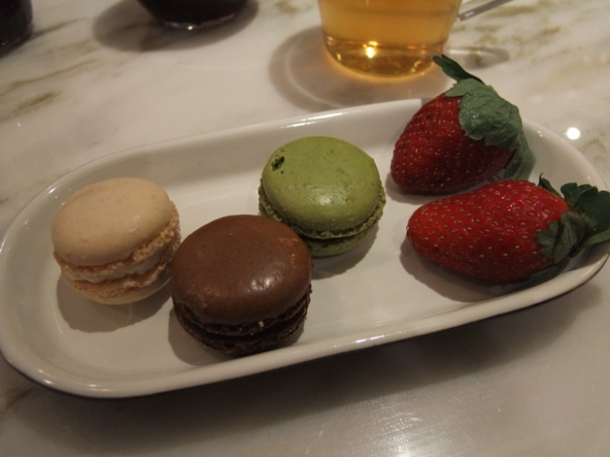 Why are French macarons on the menu at a Chinese restaurant?

Judging from our admittedly conservative selection of dishes, the food at Greenleaf is merely satisfactory with little that stands out. The menu needs pruning and refining, if only to get rid of chaff like sweet and sour pork. It’s as if all the effort and energy went towards gussying up decor and petered out by the time they got to the actual menu. As it stands, there’s little to draw anyone other than inebriated denizens of the local pubs to Greenleaf’s backstreet corner of Holborn.

Total cost for one person when shared between four people including drinks: £27 approx. (£19 approx. excluding drinks)