Is this gastropub the king of Fitzrovia foodie pubs?

Fitzrovia is desperately short of good gastropubs, so I just had to check out the Crown and Sceptre when I found out that the pub has a varied and interesting menu that changes regularly. I dragged along Sue-Ellen, Mumbles and The Pulse as my dining companions.

The Crown and Sceptre may be a pub, but it’s not an old man’s pub with sticky carpets, pensioners surgically attached to their stools and stained walls. The place is oddly decorated with chandeliers, deliberately chintzy lampshades, an unusually textured ceiling, mounted animal heads and an eclectic mish-mash of furniture. It may sound like a car crash, but somehow it all more or less works.

My mother has that exact lampshade.

The menu isn’t the usual selection of pork scratchings and battered swill either. I dined on bacon chops, artichokes and sweet potato chips covered in a watercress and parsley sauce. The bacon chops are merely very thick slabs of bacon, but the salty meatiness goes surprisingly well with the tender, sweet artichoke and the creamy, slightly bitter sauce. The sweet potato chips were suitably fluffy, but also a bit limp and a touch on the bland side. Overall, a good effort.

Bacon by any other name still tastes just as non-kosher.

Mumbles is notoriously unimaginative when it comes to food and not terribly descriptive about it either, so it took some coaxing to get an opinion out of him about his beer battered haddock served with chips, mushy peas and tartare sauce. While the mushy peas and tartare sauce were fine, he thought the chips, while thankfully ungreasy, were too soft and not crisp enough. The fish may have been nicely cooked, but the batter was too stodgy and oily, even for his pudgy, beardy face.

The Pulse opted for chunks of rib eye steak served in a ciabatta with watercress and red onion chutney. She enjoyed both the tangy chutney and the tender steak cooked medium, but, like Mumbles, thought the accompanying chips weren’t crisp enough. 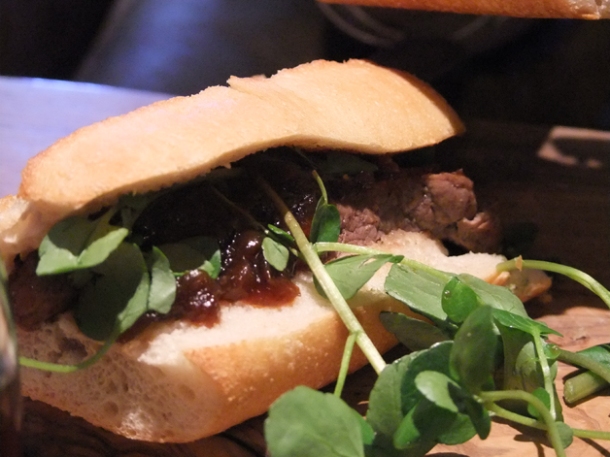 Sue-Ellen had the most interesting main dish of all – a savoury tart with Wensleydale cheese baked into the pastry. The tart is then filled with asparagus, mushrooms, peas and served alongside a beetroot and potato combo. She enjoyed the tasty vegetables which weren’t overcooked, especially the potatoes covered in a beetroot sauce which was delicately flavoured rather than overpowering. While she also enjoyed the subtle taste of the cheese-flavoured pastry, I found the flavour too muted to be enjoyable. 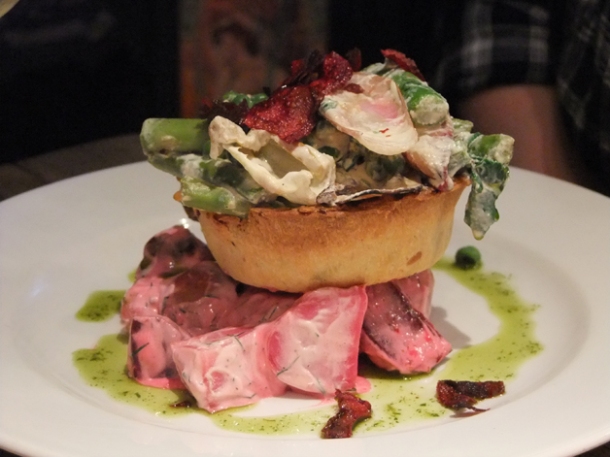 What a cheesy tart!

The desserts were just as varied as the main courses. I opted for the unusual sounding chocolate and beetroot brownie which turned out to be far less exciting than it sounds. Brownies should have a semi-solid, semi-soft texture somewhere in between that of a cake and a cookie. The Crown and Sceptre’s version was completely gooey and soft which was pleasant in its own right, but completely unlike a brownie. Also surprising was the almost complete lack of any beetroot flavour as far as I could tell. The clotted cream-esque vanilla ice cream accompaniment was satisfactory, but its generic flavour is just as unremarkable as the characterless chocolate used in the brownie. 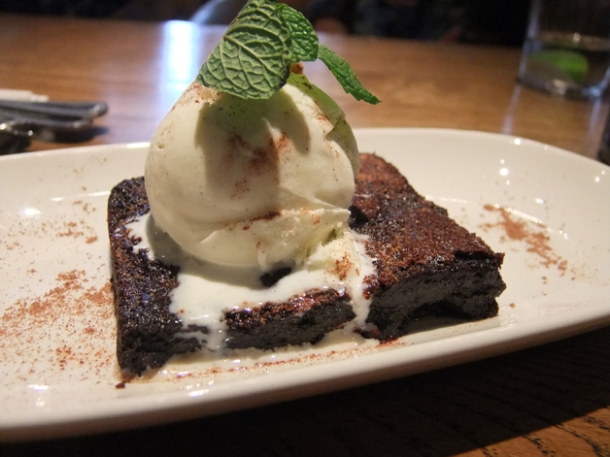 Sue-Ellen chose the sticky toffee pudding and, unusually, we were both in agreement on its merits. The raisin-studded cake was tangy and malty and wasn’t too crumbly – it was perfectly airy and moist instead. The toffee was very sweet and had a dark sugariness to it, but it wasn’t quite gooey enough for either my taste or Sue-Ellen’s. Overall, a very respectable effort.

If you want to be a stick insect, don't eat this sticky toffee pudding.

Mumbles is a notorious piss-head, second only to Sue-Ellen, so it’s no surprise he ordered the booziest dessert out of all of us – the sloe gin Eton mess. The booziness of the gin was too much for me, but Mumbles lapped it up like water. It was very creamy and fruity too, but a little soft with none of the crunchy meringue pieces often seen in other versions of Eton mess. It’s not to my taste purely because of the gin, but even the usually unfussy Mumbles was ambivalent about it.

The Crown and Sceptre deserves credit for an interesting, inventive and varied menu, but its ability doesn’t quite reach its ambition – none of the dishes were by any means bad, but none stood out either. It’s a decent and inexpensive choice for a fun pub lunch in Fitzrovia, but it’s not worth seeking out unless you happen to be nearby.

Name: The Crown and Sceptre

Total cost for one person including drink: £15 approx.

2 thoughts on “Crown and Sceptre review – pub food fit for a king?”