Whenever I visit the United States I make an effort to visit a Mexican restaurant. Although Mexican food in London has come ahead in leaps and bounds in the past few years, the US is still one of the best places (besides Mexico itself obviously) to try either traditional dishes beyond the ubiquitous burritos or more contemporary innovations. I therefore made my way to Fonda, a small restaurant on a leafy street in Brooklyn, recommended during my recent trip to New York.

If you like your Mexican restaurants decorated in a cliched, kitsch-y manner then Fonda will disappoint. It’s quite understated with modern art adorning the walls, one of which is the obligatory exposed brick wall. A large bar dominates the main dining room, although there’s also a small but attractive rear garden festooned with colourful lanterns. My waiter bore a startling resemblance to Groucho Marx and while he was friendly enough, he could’ve been a little quicker when attending to my ravenous gastronomic needs.

I started with the intriguing duck zarape which consists of a pair of corn tortillas filled with duck and served with a roasted tomato-habanero chilli sauce. If you’ve never had proper corn tortillas, they’re much smaller than the more common wheat variety and have a subtly nutty taste which was complimented well here by the gentle, tinglingly spicy tomato sauce, although a little more kick would have been nice. The duck was a little on the bland side and could’ve been pork for all it mattered, but the shredded bits of fresh coriander helped make up for it.

I usually avoid enchiladas which, in the UK, tend to be very stodgy and smothered with ladles of vile overprocessed industrial ‘cheese’. The scallop and shrimp enchiladas at Fonda were very different. The corn tortillas here were filled with a generous serving of fresh prawns, although the scallops were on the runty, tasteless side. This was made up for by the sauce which wasn’t spicy at all, but did have a subtle, moreish hazlenut flavour that complimented the seafood surprisingly well. The very nutty black beans and zesty citrusy rice were well-chosen accompaniments that helped round out a dish that, while imperfect, was still quite satisfying. 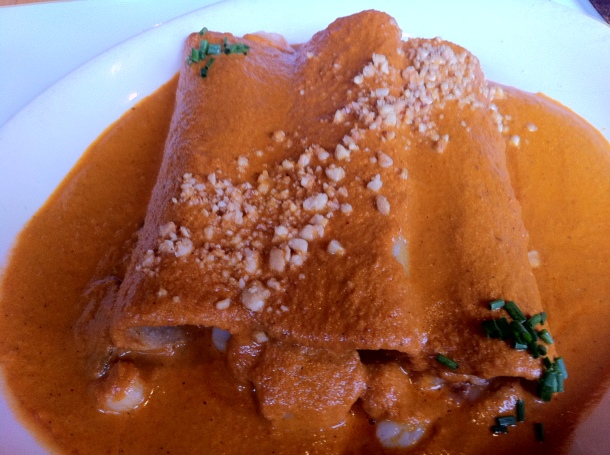 These aren’t your father’s enchiladas: no god forsaken industrial ‘cheese’ in sight 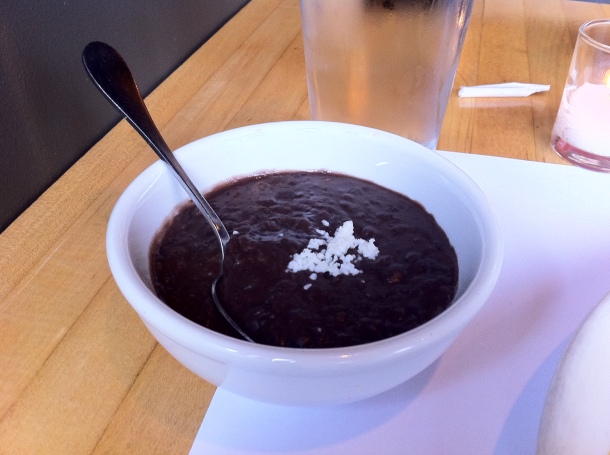 If all black beans were this good, I’d eat them more often.

If all that wasn’t filling enough I also ordered a side dish of plantains served with sour cream drizzled over the top. Plantains are basically a starchier version of bananas but with varying levels of sweetness. The expertly fried plantains here were surprisingly grease-free with a crisp, caramelised exterior giving way to a soft, addictively sweet interior. Superb. 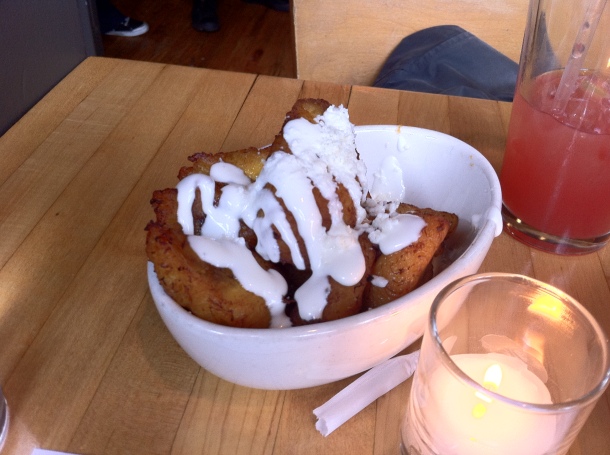 Plantains so enticing, the couple at the next table ordered some of their own.

To wash it all down I opted for strawberry juice, a fruit drink essentially unavailable in the UK as far as I can tell. The drink was watery rather than viscous, while the flavour was quite subtle and hard to describe since the taste of strawberries is so dependent on the texture of the fruit itself. It can best be described as resembling a less sickly sweet version of strawberry Ribena or a less creamy, more refreshing version of a strawberry yogurt.

My meal at Fonda was far from perfect, but I enjoyed it greatly nonetheless from the imaginative sauces to the fresh corn tortillas and addictive plantains. It didn’t hurt that it was competitively priced too. I desperately wanted to delve into the intriguing dessert menu, but my grossly bulging belly wouldn’t have taken any more food. If I’m ever in Brooklyn again, I’d be severely tempted to dine at Fonda again.

Total cost for one person including soft drink but excluding tip: $35 (approx. £22 at time of writing)