An Japanese/Pan-Asian restaurant with a technological twist

The amusingly named BJ’s Restaurants in the US have come up with a plan to place an iPad at every table to enable ordering and presumably to entertain diners with a quick round of Angry Birds before their pork omlette arrives. As you may be able to tell from this blog I’m a fan of both good dining and technology so I wish them well. But they would do well to learn a few lessons from Inamo, a London restaurant that’s already had a vaguely touch-based computerised ordering system for the past couple of years now.

Inamo’s main gimmick is that you place your order using a computer instead of a waiter. The computer is built into the base of your table, but instead of a monitor, the screen image is projected onto the table surface from a larger overhead projector. A small circular touchpad built into the corner of the table allows you to move a cursor to navigate a rather cramped icon-based interface for viewing the menu. Read a brief description, look at a very large, but low resolution picture of each one before clicking on the items you want, sending your order electronically to the kitchen. 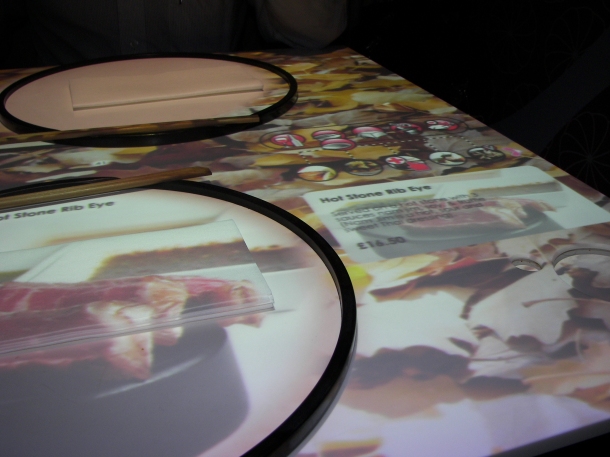 A close-up of the table computer at Inamo. Sorry folks, this is the only photo you’re gonna get in this review.

If you need help, you can click a button to call a server which you’ll need to do if you accidentally order a wrong item and need it removed from your bill which is far too easy to do inadvertently. Once you’re done, you can play games such as tic-tac-toe or battleships, view a map of the local area, change the computer’s desktop wallpaper, which doubles as a virtual tablecloth, and request your bill. It’s all mildly distracting for a few minutes until I got bored and decided to gaze at the dimly lit and tastefully, if unimaginatively, decorated dining room.

It’s all very amusing, but the computerised ordering system is a bit of a missed opportunity. Although it lets you watch a webcam of the kitchen, the footage is too grainy, small and uninstructive if you’re really interested in how your food is prepared. Since the servers who attended me on my visit were unable to answer some basic questions about my meal (Is the tuna line caught? Is the wagyu beef Japanese or American? Is the projector DLP or LCD?), then the computer should have this information on file. Except it doesn’t.

And is a cloakroom too much to ask for? Don’t go shopping before eating as you’ll have to store your bags and coats at the already cramped table.

Even more annoying is the rather hit and miss quality of the actual food. Although Inamo is nominally Japanese, it’s really pan-Asian fusion which is a pretentious way of saying the chefs have nicked ingredients and dishes from all over and then mashed them together.

The chunks of rather limp tuna in the tuna tartar weren’t large or absorbent enough to soak up the flavour of the raw quail egg, fruit and alcohol dressing. The smoky, nutty taste of the black faced lamb was pleasing, but the coarse, crumbly texture was a little odd and off-putting.

The salmon and avocado ceviche was largely a success. Although the buttery creaminess of both the fish and fruit blended together wonderfully and then enhanced by the bitterness of the citrus dressing, the effect was spoilt by some poorly chosen cuts of salmon and avocado. The undoubted triumph of the evening was the delightfully fluffy, creamy pana cotta flavoured with a hint of basil and a healthy dose of mango.

The bottom line is that Inamo serves food of varying quality at prices probably inflated to cover the electricity bill for all the computers. Posers and tourists will easily impressed by the half-baked computerised waitering system that should really be sent back. I’d much rather go to the nearby Ten Ten Tei for my fix of Japanese food. It’s not nearly as slick-looking, but it’s far better value with consistently better quality food. And if I really want to pose with a computer, I can always whip out my iPad.

Total cost for one person including soft drinks: £33 approx.