Kebabs are usually the first things that come to mind when someone mentions take away Turkish fast food, but other dishes from that storied culinary tradition also lend themselves to quick bites on the go. Two of the most obvious are lahmacun and pide, a pair of separate but related dishes that are, at the risk of being overly simplistic, the Turkish equivalent of pizza.

The originally-named Pide Oven isn’t the first dedicated pide restaurant in central London – antecedents include the bigger, flashier and comfier Babaji Pide and a few long gone hole-in-the-walls. But Pide Oven is inexpensive – you can eat yourself to the point of bursting for £15 or less – and its majority stool seating means it’s aimed more at the office worker lunch crowd and at take aways.

Even so, waiting times could be a problem with lengthy waits of around 25 minutes common during Pide Oven’s first few weeks of operation. This eventually shortened to a much more reasonable 10 minutes, although occasional lapses did still occur. Order mix-ups happened intermittently too, but are also increasingly less frequent.

Turkish food has a reputation for being meat-heavy, but the cuisine has plenty of vegetarian dishes and this is reflected on Pide Oven’s menu. The aubergine and zucchini pide could’ve been better though. There was only a very occasional hint of smokiness from the eggplant and there was next to no butteriness or pepperiness from the courgettes. The dough ranged from soft and elastic to a little tough and chewy. 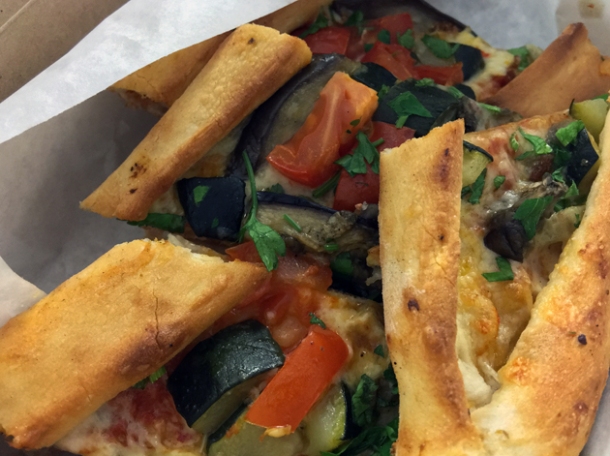 The pides, when ordered as take away, come sliced up for easy eating with your fingers.

Lightly crumbly and salty feta, as well as umami tomatoes, crisp onions and sharp peppers, made up for a minced lamb. The quality of the base improved, with a soft and pliant texture.

How does one make grease-proof paper greaseproof?

Don’t order the pastirma pide if you’re expecting Kayseri-style pastrami-esque pastirma. The coarse beef sausage slices used here were more like sucuk. It was still meaty enough to be pleasing though, especially in combination with the creamy and elastic mozzarella-esque kashar cheese and the salty, squidgy, taut and firm halloumi. 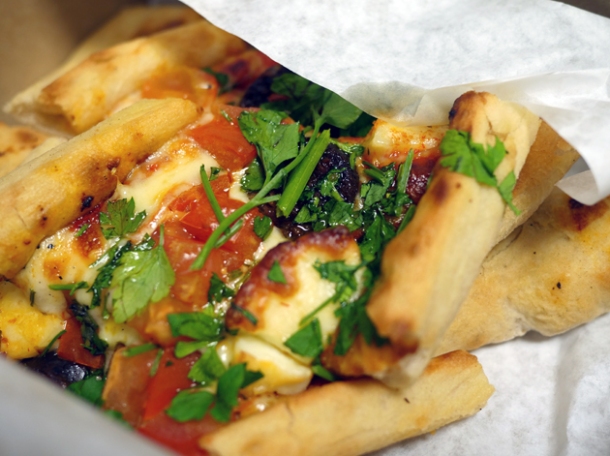 Not the pastirma I was hoping for. 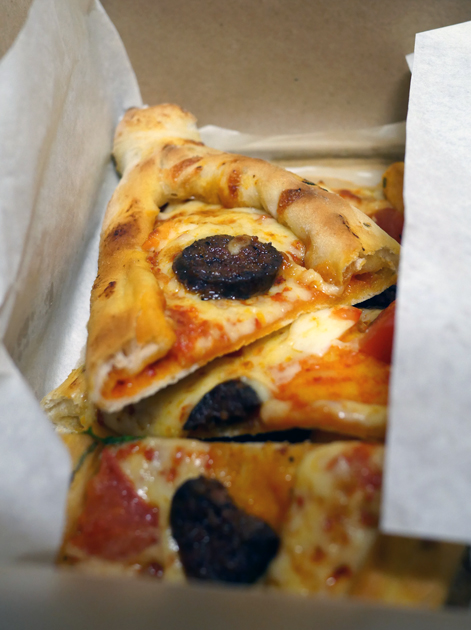 I want a pide of the action.

The same kashar cheese made a repeat appearance in the Black Sea Vegetarian pide. Although the promised paprika and aubergine were missing in action, the presence of bitter spinach and umami tomatoes meant that this pide was far from a lost cause, especially as the quality of the base hadn’t regressed. 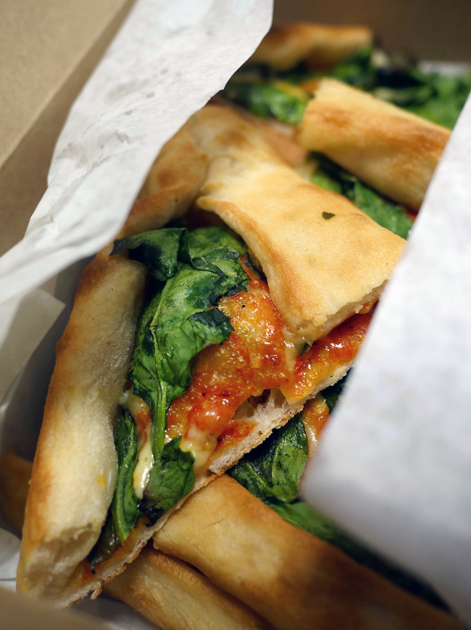 I’d kill for some Trabzon-style pide.

Pide Oven’s kitchen is capable of improvement though, as already shown by the up tick in the quality of the base. A second Black Sea Vegetarian had thin and stringy, but still reasonably fleshy and buttery aubergine. The spinach and tomatoes were just as good as they were before, while the cheese was a touch smokier this time around although this might have been the eggplant rubbing off on it. 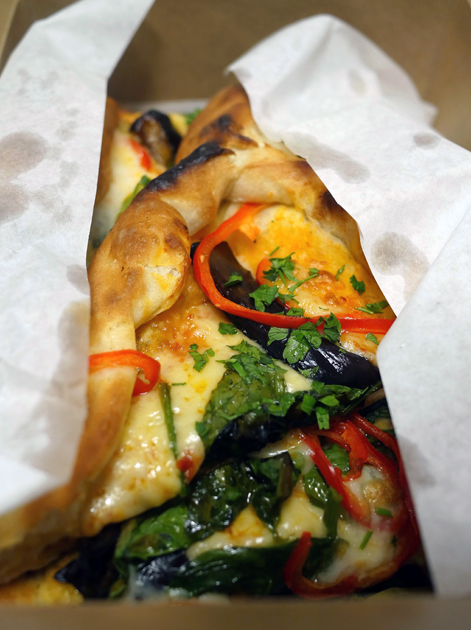 I once had to spend many late nights near Fitzrovia, hence the endless takeaways from Pide Oven.

The chicken and halloumi pide was unsurprisingly stodgy. The halloumi was tamer this time around, so it was easily drowned out by the earthy and heavy chicken as well as the umami tomatoes. At least the dough base was just as good as it was before. 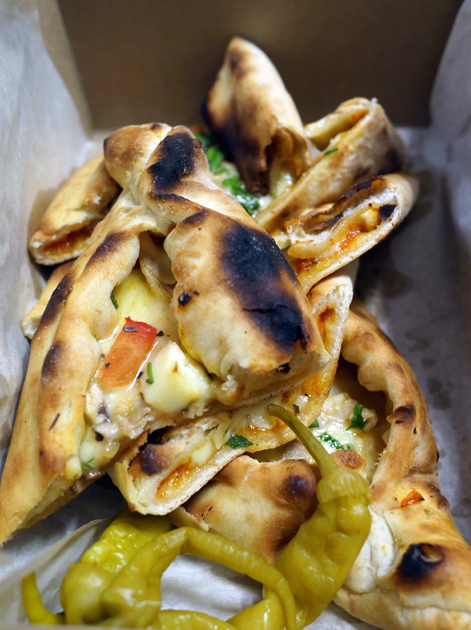 The three cheese pide was similarly stodgy, with the blended morass of cheeses little more than an uninspired melange of yellow dairy. The sharp, umami tomatoes and the quality base were the only saving graces here. 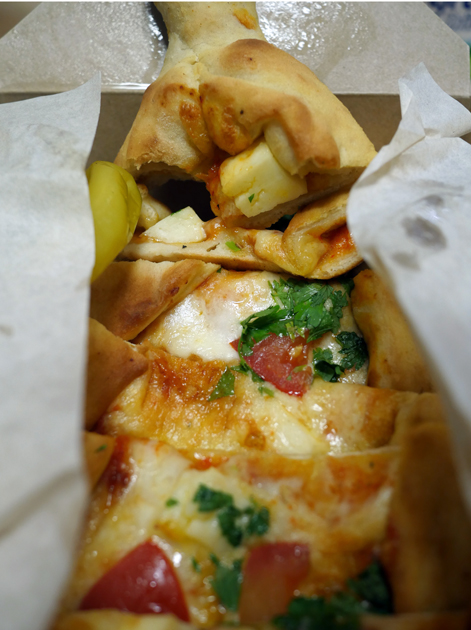 It takes this many cheeses to make something taste this disappointing.

Pide Oven’s first attempt at the staple minced lamb lahmacun was pleasantly and not overpoweringly piquant. It made up for the lacklustre meat and limp herbs, but the base was far too chewy and stodgy. 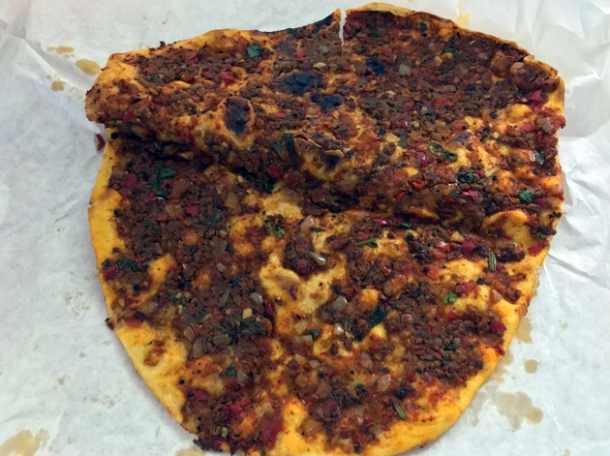 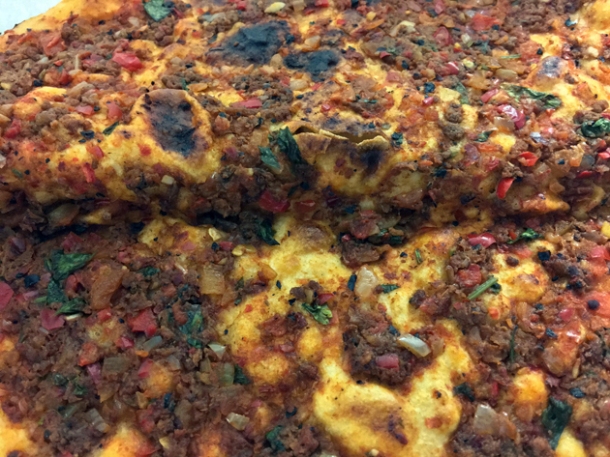 The turkey variant wasn’t much different from the lamb when it came to the meat, but the dough was softer and more pliant this time around. It was a touch more piquant too with fresher, zingier parsley. 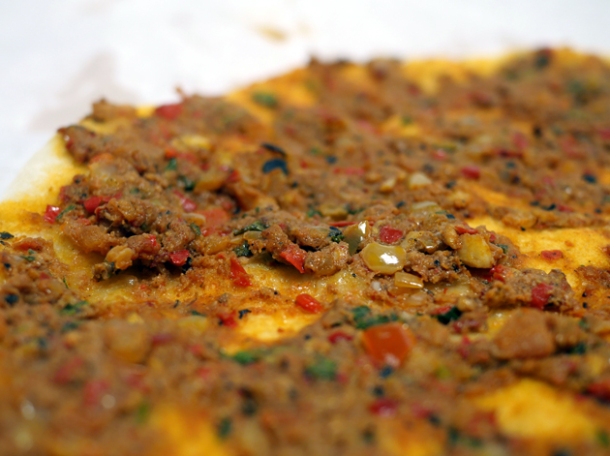 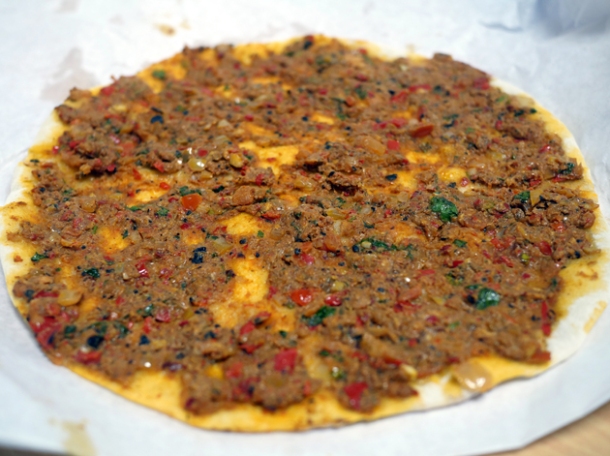 Second and third attempts at a lamb lahmacun were far better with mildly spiced, satisfyingly meaty flecks of baby sheep accompanied by umami tomtoes layered on top of a baby soft dough. 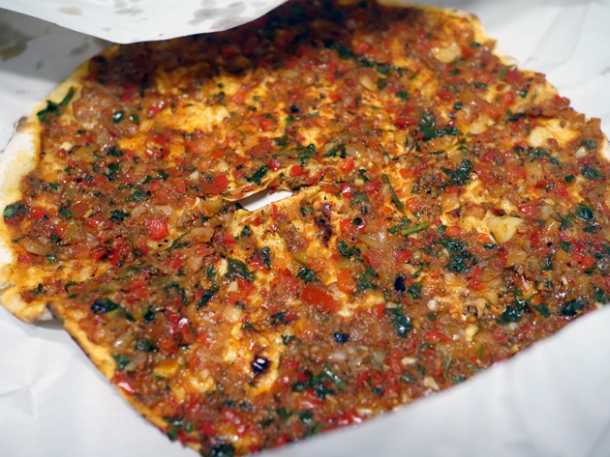 No bleating around the bush. 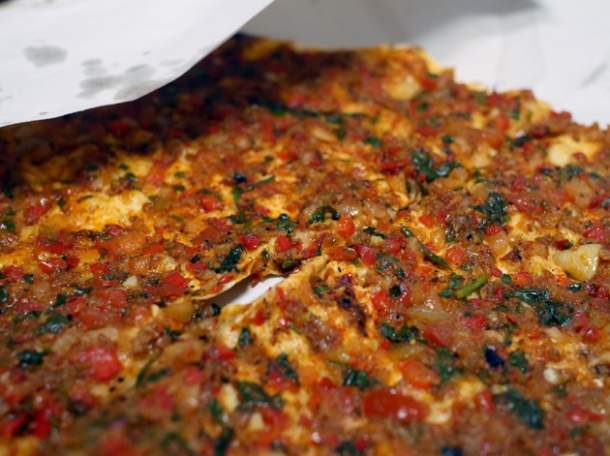 Don’t call it a pizza. 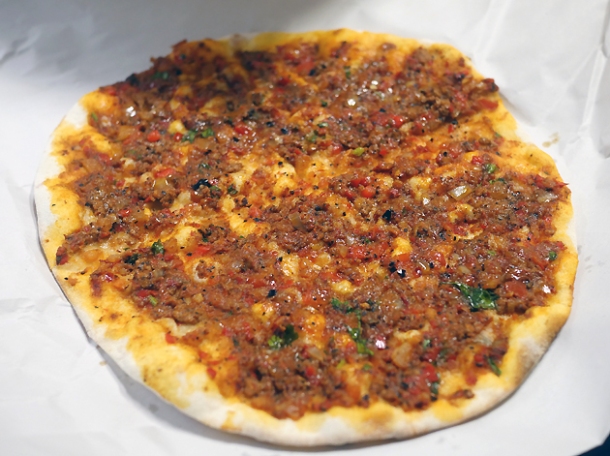 It doesn’t cost you much dough. 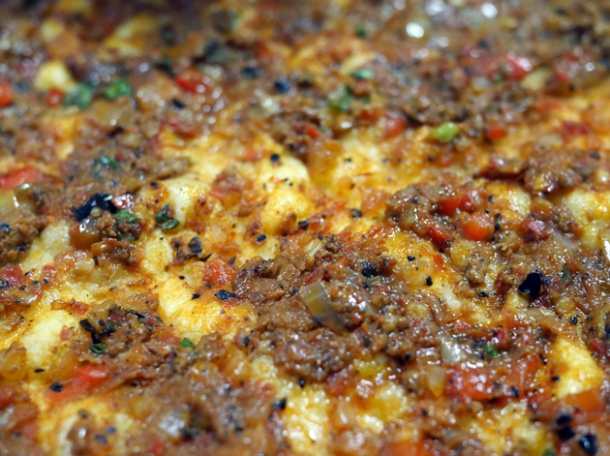 The kitchen is only human though and still capable of cocking it up. A fourth lamb lahmacun wasn’t as satisfying in the meat stakes with the mealy mince more like a paste which was just as unsatisfying and unpleasant as it sounds.

This review’s procrastination was brought to you by videos of pandas on YouTube. 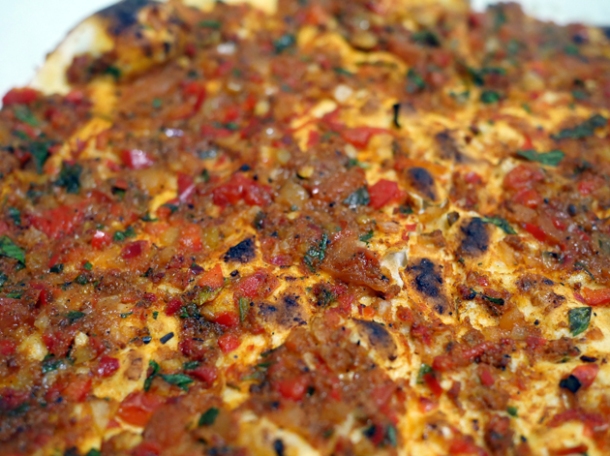 The aubergine and feta lahmacun was a masterclass in deceptive advertising with zero feta present and only occasional bits of smoky aubergine making a cameo appearance. The toppings here were dominated by sharp onions and sweet peppers. Although pleasing in their own right, especially as the dough hadn’t devolved in quality, this was a disappointing lahmacun overall. 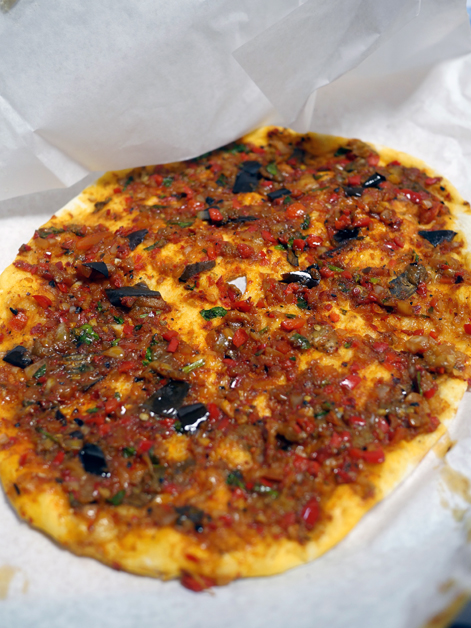 A lot happened that night. 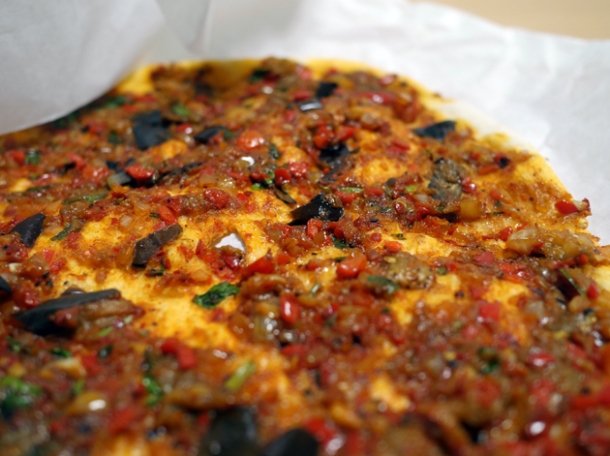 No bleating about the lack of vegetarian options. There are plenty at Pide Oven.

Side dishes at Pide Oven

The standfirst above stating the absence of kebabs isn’t entirely true. You can order lamb or chicken koftes as a side, but under no circumstances should you do so. The lamb was bone dry with a grainy, bitty texture and only a mild lemony herbiness as a consolation prize. The only thing more teeth gnashinly awful was the chicken koftes which were just as diabolically disgraceful, except there wasn’t even a hint of lemon or herbs this time around to help disguise the waste of animal lives and human effort. 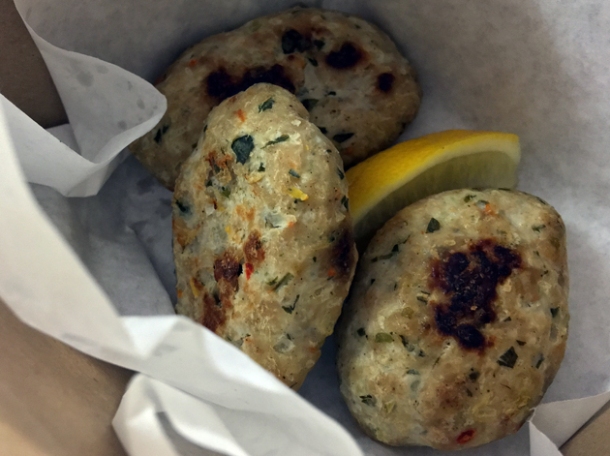 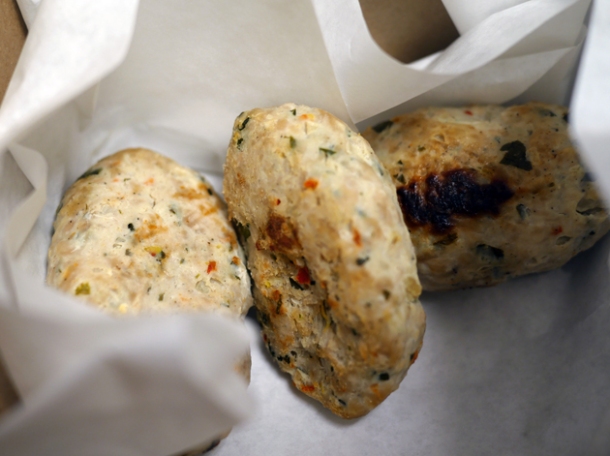 What did I put in my mouth.

Thankfully, there were no surprises when it came to the halloumi side – gently salty, squidgy, taut and firm slices of cheese although it wasn’t immediately obvious if this was cow’s milk or goat’s milk halloumi. 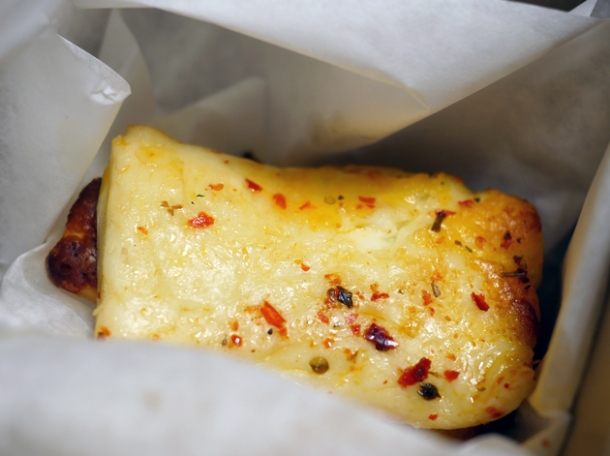 My captions are sometimes a bit cheesy.

A salad of tender, nutty chickpeas and lightly bitter spinach was topped by sharp and crisp onions. The latter was emphasised by sumac and parsley, making this a particularly refreshing salad that was also capable of cutting through the relative richness of the meat and cheese pides.

Turkish can be a tricky language to learn, even in passing.

The kitchen can foul up the salads, just like everything else though. A second chickpea salad somehow managed to consist of overcooked and unsatisfyingly stodgy chickpeas that were outnumbered by spinach leaves. 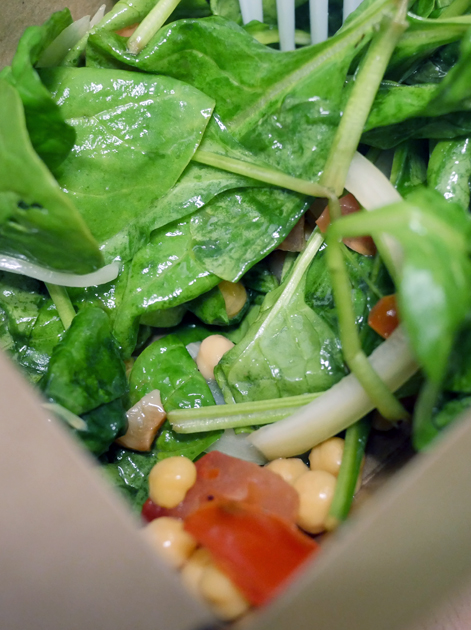 The carpal tunnel of love.

Lightly broiled chicken wings and mini drumsticks were a little greasy for my liking. The lemon and sea salt variant mostly tasted of lemon and parsley. The black pepper and coriander variant wings were, surprisingly, indistinguishable. 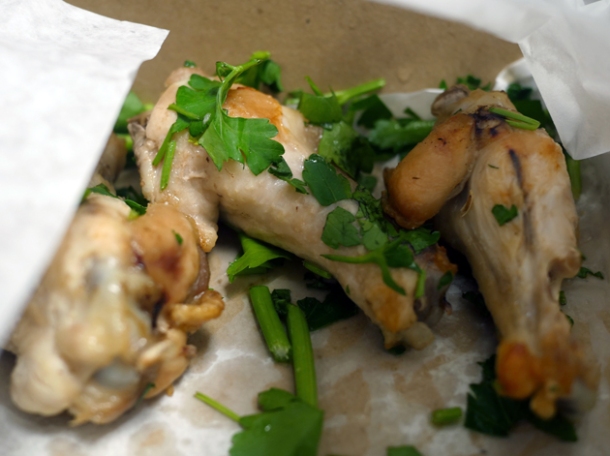 I suppose Pide Oven is a slightly more imaginative name than the possible alternatives. 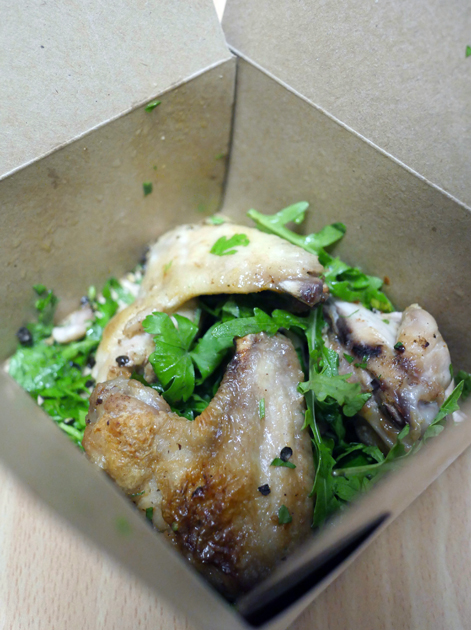 Time to chicken out.

Hot wings were extraordinary, not for their spicy heat but for their mildness and excessive amounts of grease. Only stepping up to the ‘crazy’ hot wings actually elicited wings with any actual chilli heat, although its garlicky warmth should be well within the curry house spice tolerances of most people. 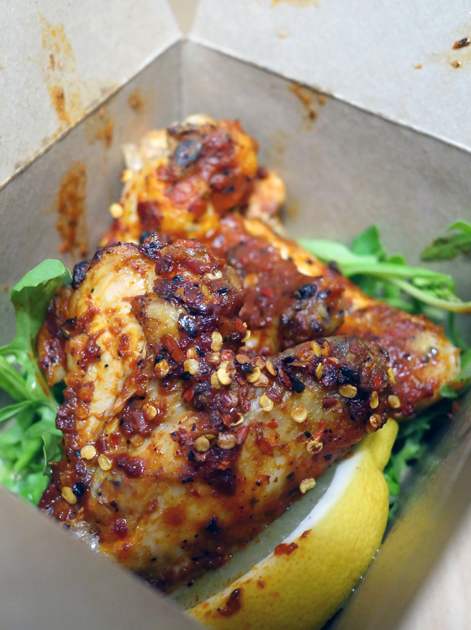 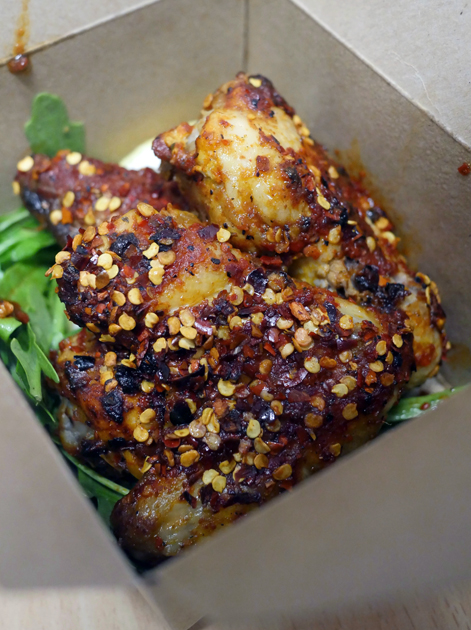 You’re crazy if you think these wings are spicy.

Neither set of hot wings were blazing enough to need a cool refreshing jolt of yoghurt, but it’s available if you need it anyway – thick, milky and just set. Alternatively, there’s the thick and nutty hummus. If it’s not made with fresh, high quality tahini then it’s doing a very good impression of it. 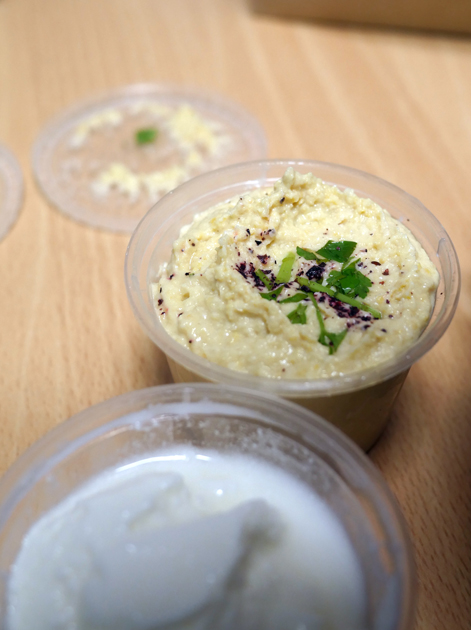 The coban salad was a refreshing combination of umami tomatoes and crisp onions, although the latter could’ve been sharper and a more generous helping of sumac would’ve been appreciated. The onion salad was effectively a tomato-free version of the coban. It flip-flopped between one version that was tart, sharp and bright resplendent with the zing of sumac and another, much tamer, disappointingly subdued version. 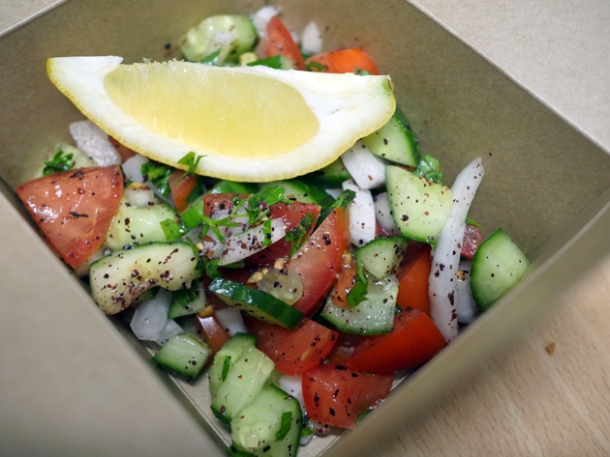 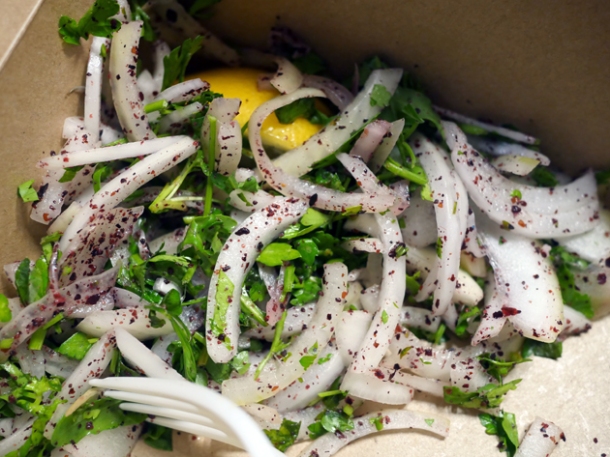 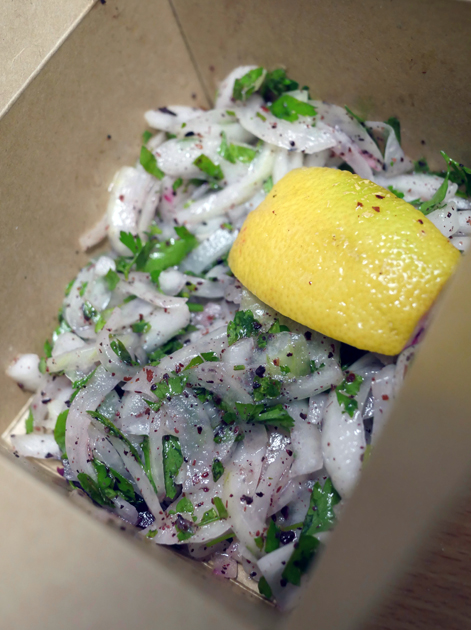 Perhaps a little too much.

Pide Oven isn’t bad, but it is surprisingly uneven with the quality of some dishes see-sawing far more than they should. It’s not reliably quick enough to be the prime office worker lunch spot that it appears to be, bur nor is it comfortable and consistent enough to be the go-to neighbourhood restaurant that it aspires to be. Pide Oven is still good enough as a take away joint with a difference, even though this feels like a waste of potential.

What to order: Lamb lahmacun; Pastirma pide; Most of the salads; Hummus; Yoghurt

What to avoid: Chicken wings; Chicken and Lamb Koftes

Average cost for one person including soft drinks: £15 approx.