Warning: bad pub food and even worse bear puns ahead

Screens are now so common that we’re surrounded by them – from the phones in our pockets to the TVs in our living rooms and the computers on our desks, many of us spend almost our entire waking lives staring at a glowing rectangle. Lots of pubs have TVs for watching sport, but The Thirsty Bear takes it one step further with iPads at every table. Mounted on rotating stalks and covered in protective casings, you use the tablets to order drinks and food which are then brought to you by an organic flesh-and-blood human being.

The software is heavily locked down though, so you’ll have to browse for porn or perv up the person at the other table on Facebook using your phone instead. At some tables you even pull your own pints. It sounds like a massive gimmick and while the tablets are also used to push ads at you, they do at least provide one tangible benefit – helping prevent the usual five-deep queues at the bar. The pub itself is a rather soulless place, but it does seem to be an actual local with a set of regulars in addition to scruffs of students and dazed office workers. 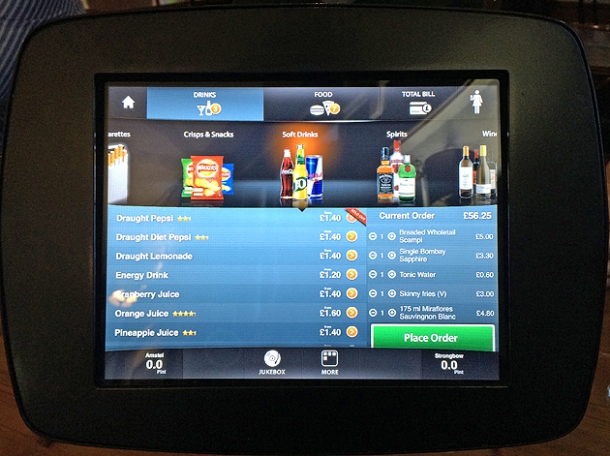 Someone else’s absolutely terrifying order. I mean, scampi? Really? Was John Travolta pointing a gun at your head?

While the menu does have some of the usual pub classics, The Thirsty Bear apparently prides itself on its burgers and has an extensive selection of them. That meant I had to try the basic, no-frills ‘Bear Burger’ – if they screwed this up, then there’d be no hope for all the variants. The smooth patty was heavily minced and cooked well done with no option for medium rare – perhaps you have to install an app for that. It was a little dry and overseasoned with very little character. None of the veg, besides the sharp red onions, left much of an impression either but at least the slightly buttery bun did a good job of holding everything together. Overall, a very mediocre burger. 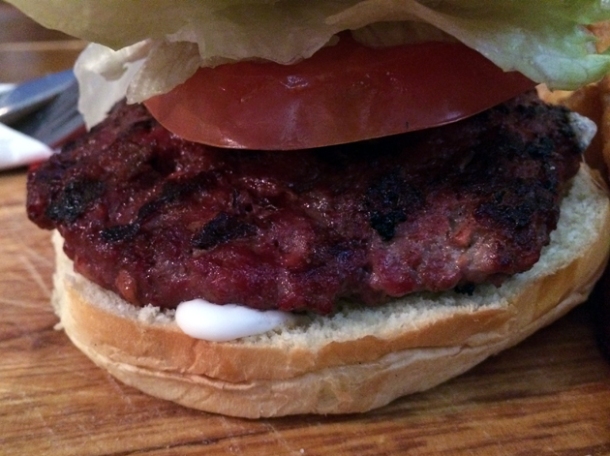 The accompanying chips were more like potato wedges – bitty, oily potato wedges. A helping of sweet potato fries had less charm than a bowl of cardboard.

Bear witness to this abject failure.

Ordering a side of ‘flamed’ chorizo was a mistake. The slices of chorizo weren’t very fatty and came sheathed in oil that tasted as unpleasant as it sounds. The chorizo was severely lacking in character, relying instead on saltiness and a glop of citrusy mayonnaise on the side for flavour.

Grin and bear it.

I’ve been fascinated by deep fried Mars bars ever since I first heard of them years ago. Even though Mars bars are one of the nastiest of all the cheap vegetable fat-based chocolates, the deep fried variant has nonetheless inexplicably haunted my imagination. After having finally tried it at The Thirsty Bear, the infatuation is over. Much like finally snagging a date with your teenage crush only to discover that they’re a vacuous Nazi who hates kittens, the deep-fried Mars bar here was a bitter disappointment. A sickly sweet concoction that was both too oily and excessively viscous to the point that it stuck to my teeth, it was so repulsive that I couldn’t finish it.

What a grizzly spectacle.

I bear-ly got out of there alive.

The Thirsty Bear’s burger is just about tolerable as stomach liner, but everything else is bin liner. Unless you really want another glowing rectangle in your life, you can get far, far better food elsewhere.

What to order: The Bear Burger. Maybe.

What to avoid: Almost everything else

Total cost for one person including soft drinks: £23 approx.