Breakfast tends to be the least interesting meal of the day, if only because most people are a little delicate first thing in the morning and need to feed on something blandly comforting and reassuring before facing the day. I, on the other hand, crave a breakfast that’s a little out of the ordinary. It’s therefore no surprise that I found myself having breakfast at Duck and Waffle in the City with the Flame Haired Squelchie. 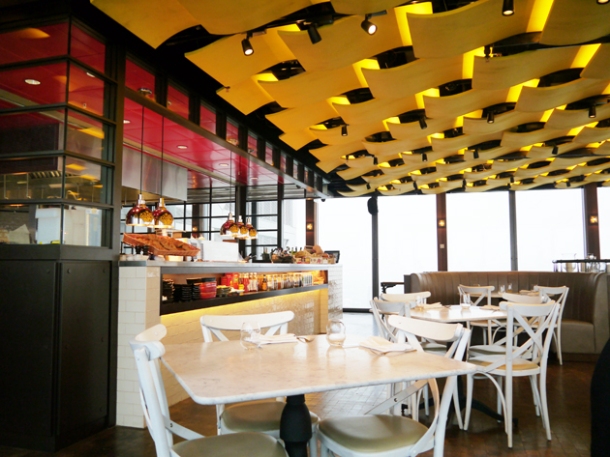 Duck and Waffle sits on the 40th floor of the Heron Tower which is just across the road from Liverpool Street station. There’s a dedicated entrance and lift separate from the main office block, but the initial surroundings of cramped hallways on the 40th floor are baffling until you turn a few corners and reach the restaurant itself. Despite being rather glossy, it’s a warm and inviting place but the real eye catcher is the view. If the surprisingly good coffee doesn’t wake you up, then the panoramic views certainly will – even on a foggy autumn day as was the case during our bleary eyed weekday visit. 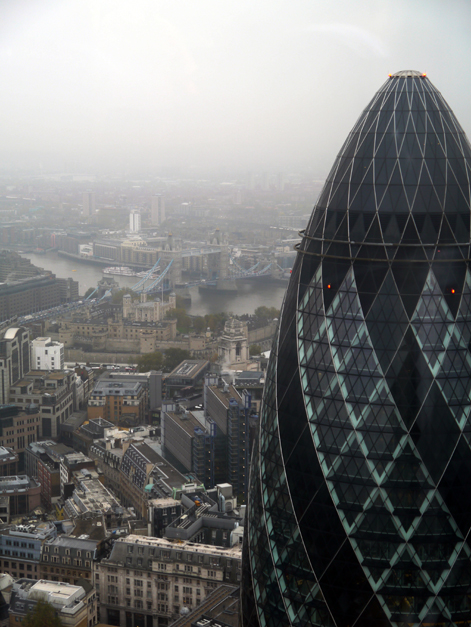 I can see my house from here. Well, I could if it wasn’t for the tall buildings, the fog and the long distances involved.

Thankfully Duck and Waffle doesn’t coast along on the views or its moneyed, chortling, chinless City clientele. The food turned out to be surprisingly good – especially as I wasn’t expecting much. The eponymous signature dish is a confit duck leg served on a waffle and topped with a fried duck egg. The dense, meaty leg has a wonderfully taut, slightly crispy skin. This goes surprisingly well with the soft, fluffy waffle that tears apart in a very satisfying manner. The runny egg is a bit flat, but the subtly sweet maple syrup is very satisfying and helps bind the whole dish together, although the addition of mustard to the maple syrup is muted at best.

In hindsight, I could’ve chosen a better photography angle.

Less successful was the foie gras all day breakfast. The rather flat, tasteless foie gras might as well not be there. Although this is a shame, the dish is still quite tasty without it. Buttery brioche toast is topped with a dark, bitter chocolate spread, runny fried eggs, chewy breaded mushrooms (or at least I think they were mushrooms) and fatty bacon rashers. Although the usual maple cured bacon was off with the kitchen falling back on standard piggy instead, the dish overall is still very pleasing.

Better off without it.

My choice of breakfast dishes were very meat heavy, but the seemingly limited selection of interesting dishes for vegetarians was far from the case. This was good news for the Flame Haired Squelchie who has now returned to the herbivore fold after a long term dalliance with pescatarianism.

The Belgian waffles are available with either berries and cream or banana and nutella and the Squelchie instantly jumped for the latter. The waffles used here are the same delightfully fluffy ones as used in the duck and waffle dish as far as I could tell. The warm, tangy, sweet caramelised bananas taste just as you would expect, but the real surprise was the nutella. The spread used here can’t possibly be the same palm oil-based mass produced stuff we’re all familiar with. The nutella used here has coarsely ground bits of actual hazelnut mixed into the dark, subtly bitter chocolate. As good as the waffle is, it’s the nutella that makes this dish what it is and it’s rather good.

Are waffles actually from Belgium?

Even the nutella here is a bit posh.

Squelchie was also very pleased with the duck egg en cocotte. Thanks in part to the addition of gruyere cheese, the eggs were creamy and hearty yet also gooey enough for dunking with the thick cut sourdough soldiers. The dish also had a certain earthiness to it, although this came mostly from the addition of the mushrooms rather than the minimal amount of truffles. Still, a great egg dish.

What’s with all the duck eggs?

Breakfast at Duck and Waffle isn’t cheap, even if you aren’t ravenous caffeine fiends like myself and the Flame Haired Squelchie. Still, there’s nothing to match Duck and Waffle for a quality breakfast with a stunning view to match. I can’t wait to go back – after all, there’s still lunch and dinner to look forward to.

Reservations: a good idea for breakfast; essential for lunch and dinner

Total cost for one person including coffee and service: £30-40 (you’ll spend less if you’re less gluttonous and less caffeine-addicted than I am).

3 thoughts on “Duck and Waffle review – breakfast at 600 feet”