Can barbecued meat served from a truck underneath a railway bridge really be any good?

I don’t usually review food trucks, but in the case of barbecue purveyor Pitt Cue I’ll make an exception given the dire state of BBQ in London. Food trucks are currently in fashion in the US and they’re exactly what they sound like – food served out of a converted, specially equipped van, truck or other automobile. Unlike the humble football ground burger van, the best food trucks pride themselves on both the quality of their food and their low prices.

Food trucks are still relatively scarce in London. Most are found in modest or unusual locations and PittCue is no exception. It’s parked right under the Hungerford railway bridge on the South Bank of the Thames immediately opposite Charing Cross Station so it is easy to find. It’s not an especially attractive location with the sound of suburban commuter trains rattling overhead and only a handful of plastic tables and chairs that resemble decapitated traffic cones.

This can be all forgiven though given PittCue’s remarkably low price of £7 which gets you a choice of meat plus a side and bread. Although there are occasional guest meats such as ox cheek (which I managed to miss out on), the two regular choices of meat are beef brisket and pulled pork which can be paired with either barbecued beans or coleslaw.

On my first visit I ordered the beef brisket with beans which was accompanied by two slices of seeded loaf. The bread had a pleasing nutty flavour, although the slices were too thin for either mopping up the sauce or for use as a rustic spoon. The juicy beef had a tender, fibrous texture that melted in the mouth with a gentle smoky flavour. The smokiness was a little subdued though, so if I didn’t know better I’d almost mistake it for some odd form of stewed beef. It’s not as intensely fatty, salty or chargrilled as the delicious brisket at Hill Country in New York, but it’s still satisfying in its own way if not as mind-blowing.

That box is sturdier than it looks.

The beans left more of a lasting impression with their firm texture and deliciously dark, smoky, sweet taste. This was balanced out by the zesty, refreshing pickles with none of the excessively tart, vinegarish taste you’d normally associate with pickles. 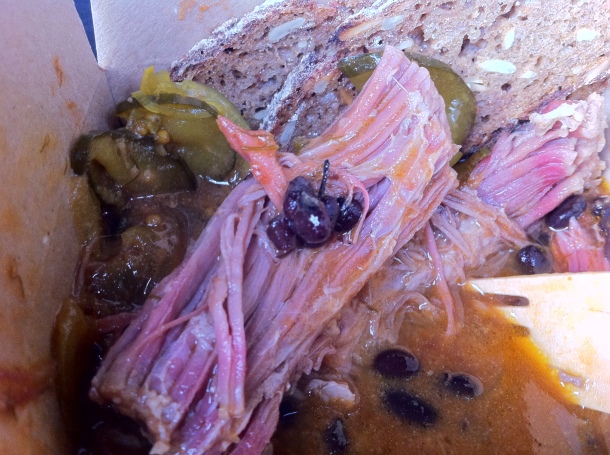 I washed it all down with some lemonade which was refreshing and not too sweet. I like a touch of tart bitterness in my lemonade but that wasn’t to be found here. Sadly the lemonade isn’t always available. 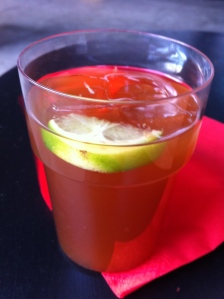 Why do you only rarely see limeade?

On my second visit I tried the pulled pork with coleslaw. Like the brisket, the pulled pork was tender with a pleasing, fibrous texture and was moist but not soggy. Again the meat had a gently infused smoky flavour but with added sweetness that had a certain fruity charm to it. Unlike the unmistakably beefy brisket though, the character of the pork was a bit underwhelming although that is nitpicking slightly. The bread this time around was a large doorstop chunk of loaf more than suited for soaking up the meat juices.

Big eats, but not too big. 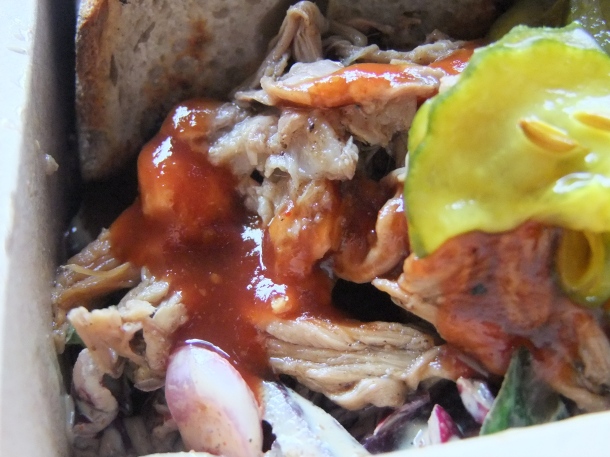 Once again the side dish was in some ways more interesting than the meat. The red cabbage and parsley coleslaw wasn’t excessively creamy nor was it bland and soft – the parsley is unmistakable and the shreds of red cabbage have a firm bite which provides a nice counterpoint to the tender meat. The refreshingly zesty pickles were present and accounted for.

Hungerford Bridge is not entirely rainproof. Trust me on this.

There’s no denying that at a mere £7 PittCue is a bargain and the quality of the food was surprisingly good too. Although it doesn’t reach the dizzying heights of the best American barbecue, it’s still worth seeking out for inexpensive, sensibly sized portions of smoky meat and I’d much rather eat at PittCue than some of the dire chain restaurants on this part of the South Bank.

Although I might think differently if it was served in an actual restaurant at higher prices or if someone else provides some real competition, for now PittCue serves the best American-style barbecue in London but it’s only open until September 2011.  A cautious four stars.

Total cost for one person including soft drink: £10 approx.