I usually avoid museum restaurants like the plague since they’re usually nothing more than glorified cafeterias serving up overpriced, reheated microwave meals and bland supermarket-quality sandwiches. I made an exception for The Modern, the restaurant at New York’s Museum of Modern Art, which has an uncommonly good word-of-mouth.

Unfortunately I didn’t pack a jacket and tie so I could’t sample the tasting menu which is served in the main dining room overlooking the Museum’s sculpture garden. I did manage to snag a table in the comparatively informal Bar Room which, unsurprisingly, is dominated by a lengthy bar running alongside one length of the run and all the boisterous drinkers that go with it. The clientele on my weekday evening visit was almost entirely gaggles of business suits and couples. The classy decor consists mostly of dark wood, glass and mirrors. There is also a surprisingly subtle glass mural of a jungle that somehow blends into the background.

For some reason all the waiters wear red shirts and black trousers – they could double as traffic wardens in an authoritarian state in that sort of getup. Nonetheless service was generally helpful and attentive, although once the room started filling up, I was slowly and gradually left to my own devices – settling the bill took far longer than it should have for example.

The food is Alsatian-inspired (as in the region of France, not the dog you sickos), so there’s quite a lot of meat on the menu, especially sausages.I started off with the spicy steak tartare which was only subtly spicy at best. The texture was too smooth, pulpy and overly processed for my taste – I prefer a coarser texture in my tartare. The rye toast and poached egg, while well done, added little to an uninspiring version of a classic French dish.

If it’s a rectangle and placed on a totally impractical convex plate then it must be good!

The second course was an unusual and inventive dish consisting of a delicately poached egg paired with chunks of fresh lobster and a creamy, smoked aubergine puree. The aubergine mush successfully added a smoky touch to the dish and is tasty in its own right which is rare outside of Levantine restaurants. That smoky creaminess mixed well the viscous egg yolk and lobster chunks. The sea urchin foam added little to the mix though and only tasted mildly of sea urchin at best. I’ve always been sceptical of foams – an overprocessed and slightly pretentious food item that is literally wishy washy.

I’ve never had Alsatian sausages before so I opted for the boudin blanc, a white sausage, for my third course. The boudin blanc itself was quite a surprise with a smooth, pate-like texture and a slightly salty, slightly creamy taste that was vaguely reminiscent of pureed chicken livers. It’s a subtle taste that’s complimented well by the much more bold flavour of the bacon mayonnaise. Although it sounds like a cheap, artificial gimmick that could only come from America, the creamy mayo successfully combined a natural-tasting salty bacon tang with the creaminess of the mayo.The quinoa salad, although refreshing and well-prepared in its own right, was comparatively uninspired. 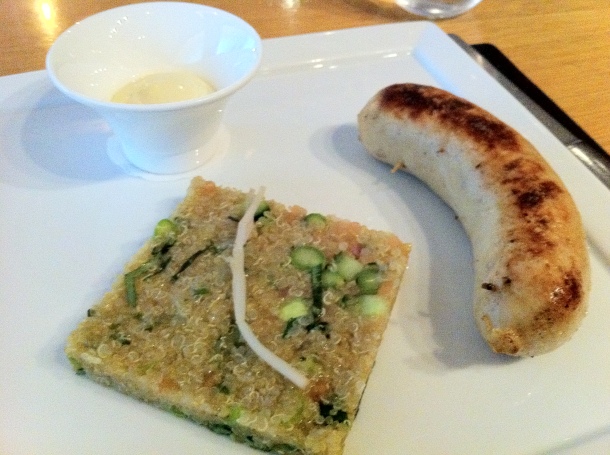 Yes that quinoa salad is square. No, I don’t know why.

None of the desserts took my fancy, but I was intrigued by the selection of cheese, all of which were American. Although European cheeses made from unpasteurised milk are now available in the US, this hasn’t always been the case. Rather than settle for neutered, pasteurised versions of European imports, a cottage industry of unpasteurised American cheeses sprung up, so I was eager to try them out here.

If I’ve got the order right, the cheeses are (from left to right) – San Andreas, Meadow Creek Grayson and Bayley Hazen Blue with some chutney at the end there

Unfortunately two of my three chosen cheeses tasted like poor copies of more interesting European cheeses. The Bayley Hazen Blue is a blue cow cheese that tasted like nothing more than a pale imitation of a Roquefort. The mellow San Andreas has a creamy, nutty taste not unlike Gouda or perhaps Gruyere, but unfortunately it had none of the depth and complexity of either of those, more accomplished cheeses.

More successful was the Meadow Creek Grayson which had a sharp taste with a slight salty finish and a bit of a salty crunch, most likely due to crystallised enzymes produced by mould rather than actual salt. It’s a surprisingly interesting cheese that’s quite unlike any European cheese I’ve had, although the salty finish does remind me of a well-aged Comté.

To wash it all down, I finished with a pot of spiced chai, which was remarkably unspicy. For a city with a burgeoning Indian population, this was more than a little disappointing.

The Modern’s a la carte Bar Room menu turned out to be a mixed bag. The boudin blanc and poached egg with lobster and foam were generally well-executed, but the steak tartare was a great disappointment. The all-American selection of cheeses was intriguing, but ultimately underwhelming overall.

None of the quality dishes were truly memorable, but were instead merely accomplished which is a tad disappointing at this price. Hopefully the Modern isn’t holding back all the good stuff for the tasting menu. The Modern just gets four stars, since I would be surprised if there wasn’t a better modern American restaurant in New York at this price.

Opening Hours (what is it with New York restaurants and opening hours?):

Total cost for one person including soft drink but excluding tip: $22 (approx. £14 at time of writing)