A Modern European restaurant with an Australian twist.

I feel mildly sorry for any City restaurant that happens to be on the same street as the celebrated St John Bar and Restaurant, a celebrated 17-year old fine dining institution. The Larder is one such restaurant, only a few yards away from St John. Whereas St John is all about worshipping at the altar of meat in all its bloody and myriad forms, The Larder has a more vegetarian and pescatarian friendly menu.

I visited the Larder for a weekday business lunch as part of my day job.  I was ushered into the private dining room in the back, which was rather plainly decorated apart from a pretty little chandelier. This meant I didn’t get to take in the decor of the main dining room, which was sparsely filled during my visit, although I did notice the rather dim lighting and the rather low ceiling which gave the place a slightly claustrophobic feel despite its large size.

The mostly static and unchanging menu has some mild Asian and Australian influences which is no surprise since the proprietor, although originally from Yorkshire, worked for several years in Sydney. The appeal of such intriguing options as grilled sea bream with crab risotto or the salt and Sichuan pepper squid with chilli mayonnaise was lost on my fellow dozen or so diners though (none of whom were my regular and trusted dining companions). They almost all opted for such mundane dishes as fish and chips, burgers and pies. They may well be perfectly fine dishes in their own right, but such a staggeringly brutal lack of culinary imagination and adventurousness makes me want to hold my head in despair. Thankfully, one commendable soul ordered the confit of duck with scallops and seemed thoroughly pleased with his choice (sorry folks, no photo).

The small platter of focaccia and ciabatta pieces served with olive oil-topped hummus was a good way to start off a meal. The thyme-topped breads were just the right combination of fluffiness and chewiness and whoever thought of complimenting them with hummus is a genius who deserves a raise, or at least a hearty slap on the back.

Italian breads with hummus may sound odd, but it’s an inspired pairing.

I opted for a first course of tuna tartar served with pickled ginger and a poached egg. The small chunks of tuna were a little on the bland side while the pickled ginger lacked its usual bite. The addition of the creamy poached egg melded well with the raw fish and rescued what would otherwise have been a underwhelming first course. 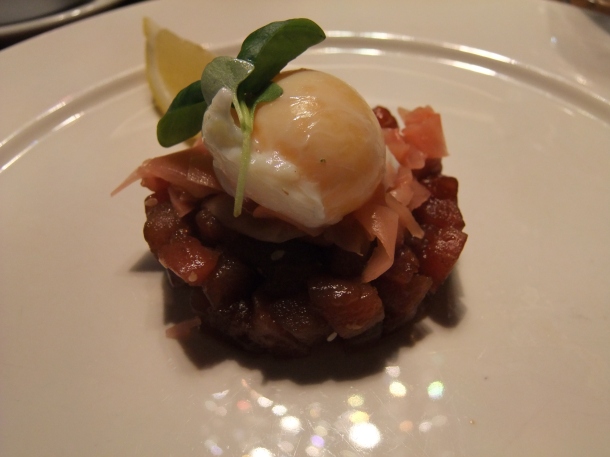 This tuna tartar has egg on its face.

My main course of grilled monkfish served with roast pumpkin, spinach and orzo was also a mixed bag. The monkfish was firm and succulent, but dramatically overseasoned with too much salt and pepper. I suspect some of that was meant for the vegetables and the orzo which had a rather muted taste in comparison – especially the pumpkin which wasn’t as sweet and creamy as I had expected.

Monkfish is apparently the poor man’s lobster. Which is a bit silly, since it’s not really that cheap.

Service was generally polite and efficient, but not very knowledgeable. Orzo, an Italian wheat or barley pasta that looks uncannily like rice, was misidentified as a type of rice by the waitress when I asked her what it was. Despite the printed claim on the menu that all the fish were from sustainable sources, the same waitress was unable to tell me which species of tuna would be used in my tuna tartar and where it was from, which makes me doubt their sustainability claim.

The Larder will appeal to many people thanks to its vegetarian and pescatarian menu options, so it’s a shame that it isn’t in the same league as the nearby St John when it comes to knowledgeable service or the quality execution of their diverse menu. I’d still much rather eat there than at the Pizza Express or other chain restaurants just around the corner, but there’s little reason to dine at the Larder unless you happen to be in the area and can’t go to St John for whatever reason. Such as being accompanied by other diners with a deficit of ambition.

Total cost for one person including free tap water: £25 approx.