A head-scratching double take on The Strand

Bringing an under-appreciated cuisine or dish to foreign shores is an effort fraught with all sorts of logistical, culinary and financial difficulties. Reviewing such an effort isn’t as arduous, but still has pitfalls of its own. Yen, a new restaurant on The Strand, is a purported specialist in soba or Japanese buckwheat noodles. This doesn’t seem particularly noteworthy at first glance, but many of the soba dishes I’ve had in London have been workman-like at best – especially when compared to the joys of Kanda Yabu Soba in Tokyo.

But comparing a new London restaurant to a century-old Akihabara institution is tricky. Not just because of the endlessly-discussed issue of authenticity, but the related issue of what I will call ‘reveries’. Or, to exercise my humorously overwrought acronym crafting skills, REVERIES – Residual Exotic Vacation Enhanced Recall In Eating Situations. The cultural differences and diverging expectations between eating out in London and eating out in Tokyo means that any soba-supping night out will be inevitably, unavoidably different. Add in the nostalgia and warm memories associated with a trip of a lifetime where my soba order was taken by gently singing waitresses and any effort in the West End is bound to come up short.

And yet I greeted the news of Yen’s opening with a swell of scepticism. Although the menu isn’t nearly as expansive as I had feared – especially when compared to most Japanese restaurants in Britain – it’s still remarkably unfocussed. With sushi, sashimi, tempura and donburi in the mix, Yen’s non-noodle dishes vastly outnumber the soba ones – and that’s excluding starters and desserts. It’s a far cry from the almost singular focus of most restaurants in Japan. Kanda Yabu Soba, by comparison, offers just soba dishes for your main course which in turn means it can offer a richer and more meaningful choice of ‘toppings’ and broth compared to Yen.

A striking and pertinent example is Yen’s soba with duck. The hot version saw mildly chewy soba and so-so duck in a broth that was so piping hot, it should really have been given a little more resting time. It was a lovely thing to sip though, with its gentle cumulative umami heightened by the citrusy sweetness of candied orange peel and the mild earthiness of the duck. The supple and dense leeks were arguably more texturally pleasing than the duck. The meat could have been a little more tender, especially with much of its earthiness seeping out into the soup. Even so, this bowl of noodles was more than delicious enough to hold its own against Tokyo’s best.

I should’ve taken to this place like a duck to broth.

The downside to Yen’s weirdly lopsided menu was apparent in the cold version of the duck soba. Rather than soba noodles in a cold broth, as done so deliciously by Kanda Yabu Soba, Yen merely served room temperature soba alongside the same duck-with-leeks-in-broth. The chewy noodles were just as good as they were before, but the broth wasn’t nearly as delightful. The umami was far more blunt and one-dimensional – almost as if someone had accidentally thrown whole fistfuls of unreduced dashi into the pot.

The duck was a tad more tender, but even less characterful than it had been the first time around. While not too bad on its own terms, it was a deep disappointment both when compared to Yen’s previous effort and when compared to Kanda Yabu Soba’s lip-smacking rendition. The boiled water, in which the noodles had been cooked, was at least served in a jug on the side. Its almost indescribable moreish sweetness made it a surprisingly apt palate cleanser. 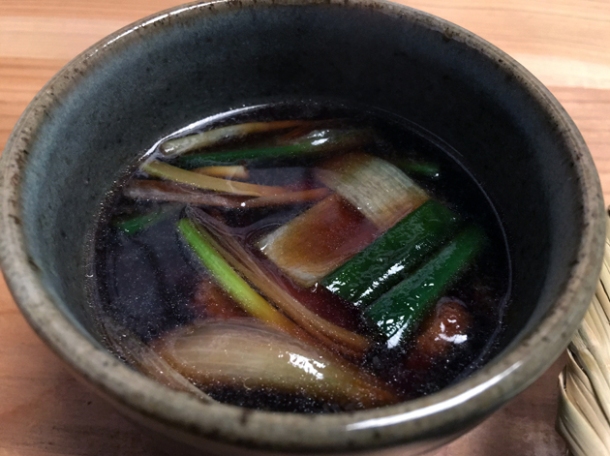 It left me cold.

You can opt to have tempura with your soba, but I decided to have it separately as a starter of sorts. The sweet potato chunks and shiso leaf had little to say for themselves, but the mildly buttery courgettes and the zingy fresh prawns were both pleasing. While the batter was far superior to many other version of tempuras in this city, not to mention other efforts at battered and deep-fried food, it did have a niggling issue of its own. It was light and airy, but almost to the point of ethereal non-existence. It certainly had none of the crisp creaminess of the golden goods found at Tempura Tsunahachi, a Tokyo tempura specialist that also used better quality seafood and vegetables to boot. 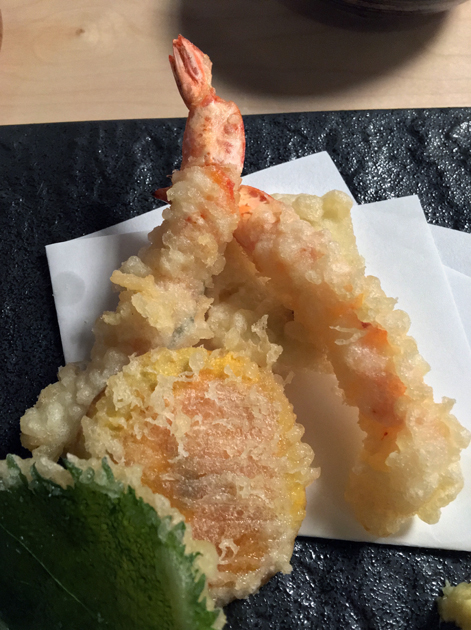 My stomach has taken a real battering recently.

The tofu, another starter, wasn’t what I expected at all – in a good way. The creamy and nutty paste was almost like tahini. It went surprisingly well with the mild heat of smashed ginger and it contrasted neatly with the sharpness of chopped spring onions.

Yen, for whatever reason, not only serves donburi but in portions large enough for two people. Or, in my estimation, for an adult and child. Although the grilled eel in the unadon didn’t quite have the glossy, lacquer-like appearance that I’d expect, it was nonetheless a treat. The crispy skin was matched by the wispily delicate, yet moist and subtly fatty flesh. The rice hadn’t been overlooked – the soft and fluffy small grains had a mild fruity sweetness courtesy of what looked like capers, but were probably sansho berries. Despite its almost excessive portion size, Yen’s unadon stands as an elegantly poised rebuke to every other half-assed version of this dish in London.

Yen’s sushi counter is a relatively comfortable place to perch, despite the almost backless stools chosen by whichever sadistic interior designers had crafted Yen’s dining room (more on that in a bit). It’s just about worth putting up with, just to see Yen’s sushi chef at work.

Sweet and almost vinegary small-grained rice was used in all five pieces of the ‘standard’ nigiri omakase. The salmon was only so-so but the meaty tang of tuna was a delight, as was the sweet bass and the buttery scallop. The highlight had to be the squid though, with its sweet almost briney initial flavour giving way to a surprisingly crisp and clear aftertaste.

As with any omakase meal, your selection of fish will almost certainly vary. 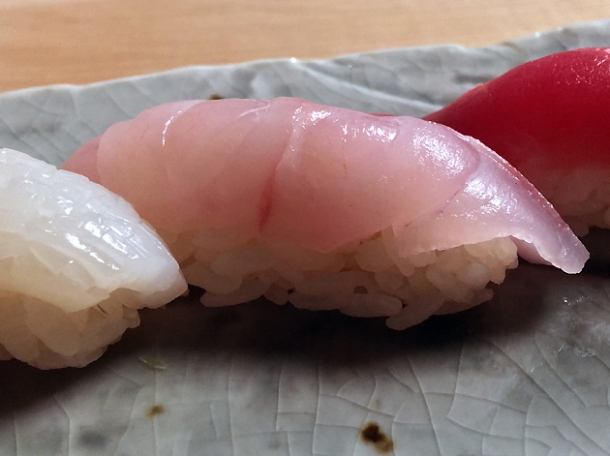 This review’s procrastination was brought to you, in part, by celebrating the festive season. 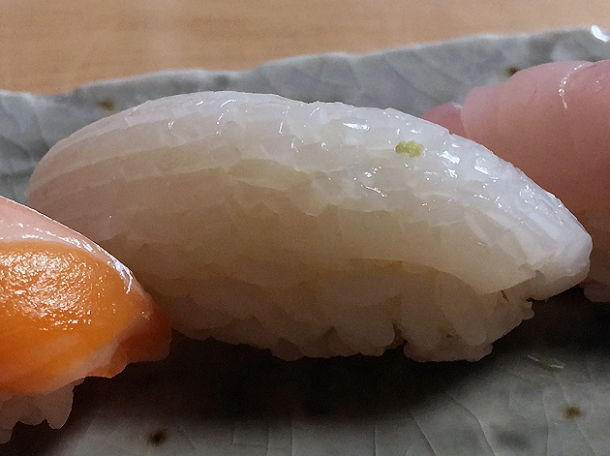 The five-pieces of ‘premium’ omakase nigiri used the same high-quality rice as the standard rendition. It got off to a bumpy start though, with the qualities of the unidentified red-tinged fish drowned out by a vinegary umami glaze. Almost everything else in chef’s selection was top-notch though. Tuna with a meaty tang made a repeat appearance, followed by the delicately fatty butteriness of chutoro tuna. The chutoro was almost displaced as my favourite of this omakase by the yellowtail. Its citrusy sweetness would’ve made the perfect finisher, but for the final choice of salmon roe wrapped in nori. Its relative lack of richness made for a somewhat disappointing end.

The lighting at the sushi counter really is quite unflattering. 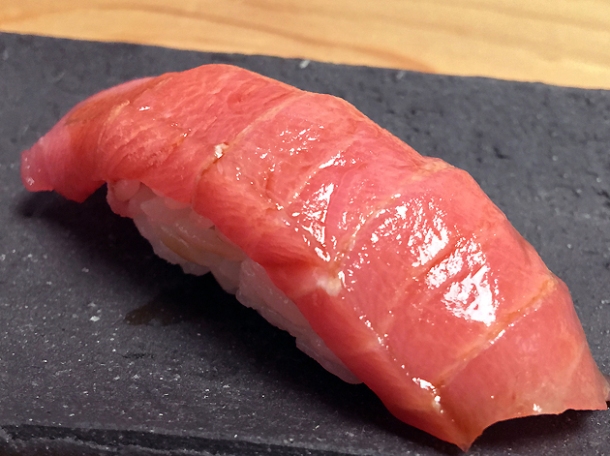 Accurately capturing the glistening iridescent colour of the fatty tuna was quite a challenge. Hopefully I’ve done it some justice. 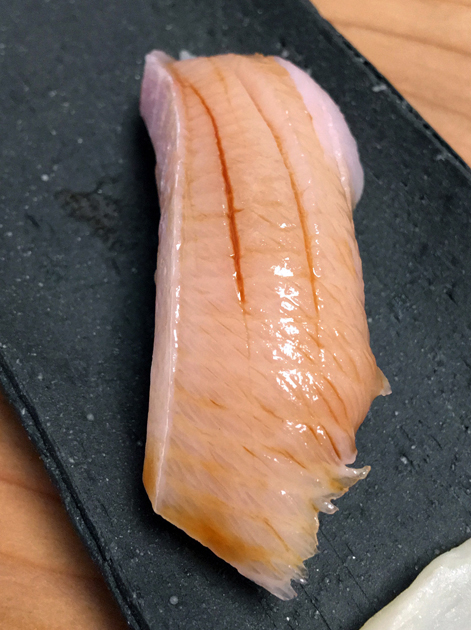 Could I not have had some of that intriguing looking fish milt on display, instead?

A modest selection of traditional Japanese-style confections, or wagashi, were presented sundae-style. Although the intruding nutty black sesame ice cream was too crunchy for its own good, everything else came together beautifully. From the musky sweet and nutty red beans to a chewy matcha-flavoured warabimochi-style sweet and pearlescent mini-mochi, everything was flavoursome yet light. Jettisoning the texturally flawed ice cream and needless whipped cream would make room for even more scrumptious wagashi.

Any day of the week and twice on sundaes.

Just as good – and flawed – the second time around.

If Yen hadn’t marketed itself as a soba specialist, then I’d likely be far effusive about the place. There’s much to commend here, from the quality of the sushi to the deliciousness of the eel donburi, the tofu and the wagashi. But I can’t get over the fact that the menu is so lopsided with the soba almost presented as an afterthought. Although the kitchen can indeed crank out a very pleasing bowl of buckwheat noodles, the surprisingly limited vision of its oeuvre here is immensely disappointing as is the inconsistency of some of its output.

This unbalanced menu can’t be considered in isolation from Yen positioning itself as a fine-dining restaurant – located within the ground floor of a block of new luxury flats, no less. I’m a staunch defender of fine dining where it’s appropriate, but it’s either a striking lack of imagination or a deep commercial cynicism to serve soba – a commonplace dish in Japan – in such a setting and then to hide it on a menu amongst other, more well-known Japanese classics. This strangeness is compounded by a straightjacketed soba selection with little of the rich regional technique and innovation that characterises its use in Japan.

Although Yen’s jutting woodwork aesthetic is pleasing as an evocation of traditional Japanese woodwork, the vaguely Zen-ish rock garden by the stairwell feels self-indulgently ornamental. While the upstairs bar is atmospherically lit, the lighting in the main dining room seems almost neglected and half-finished. The blonde wood of the sushi counter is bathed in a startlingly bright shaft of light, with the rest of the room shrouded in an almost murky gloom. Most of the tables seem cozy enough, with the exception of those by the draughty windows. The somewhat stiff service may break itself in eventually, but for now it doesn’t come anywhere close to the warmth and charm of Kanda Yabu Soba’s singing waitresses.

One step forwards, two steps back.

Comparing Yen to a soba restaurant half a world away may seem unfair and of little practical use to London diners, but it highlights what a missed opportunity this restaurant is. By not focussing on soba, its alleged central dish, and lavishing attention on so many other unimportant things, Yen shows just how dull and unimaginative it really is. It could’ve set the standard for soba in London. Perhaps it still can. But, for now, it’s just another one of the capital’s misguided and self-indulgently expensive Japanese restaurants.

Average cost for one, including soft drinks and tea: £70-100 approx.