There are remarkably few Greek restaurants in London, especially when compared to the proliferation of Turkish restaurants. 21 Bateman Street, which follows the annoying trend of naming itself after its address, is not only one of the few new Greek restaurants in London but is the only that I know of that focusses on just souvlaki. This dish of grilled skewered meat is very similar to Turkish kebabs with, as far as I can tell, only relatively small differences in seasoning and the fat content of the meat. An exception to this trend is the presence of pork which, unsurprisingly, is absent from your typical Turkish grill.

Before diving into the souvlaki with the help of the Flame Haired Squelchie and the Randy Northerner, I started off with the wild boar sausage. While mildly coarse, it was ultimately rather anonymous and forgettable despite the chunky bits of fat flecked throughout. 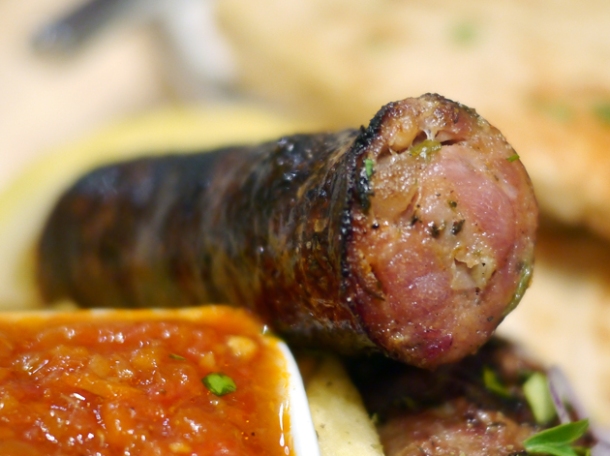 We all shared a Greek salad, but with the feta on the side to accommodate the Randy Northerner’s lactose intolerance and the Squelchie’s intolerance of cow’s milk. Her Lovecraftian physiology is fine with proper sheep’s milk-based feta, but the staff were surprisingly unable to tell her if the feta used cow’s milk or not, so she played it safe and abstained. The firm and slightly crumbly cheese was the most enjoyable part of the salad – the red onions weren’t quite sharp enough, nor were the tomatoes and cucumbers sweet enough. More olives, as well as a punchier seasoning, would have helped too.

…with feta on the side.

Despite her Greek Cypriot upbringing, the Squelchie didn’t recognise the odd bulbous patty of a pork souvlaki. It was moist, but otherwise unremarkable. Far more enjoyable was the kofte-esque lamb variant which was slightly smoky, moist and laced with fat. The skewered chicken was smokier and a touch drier, but still almost as unctous as the lamb. There’s no shortage of carbs – every plate of souvlaki comes loaded with fries and lightly toasted pitta, although you can opt for more Greek salad instead of fries if you wish. 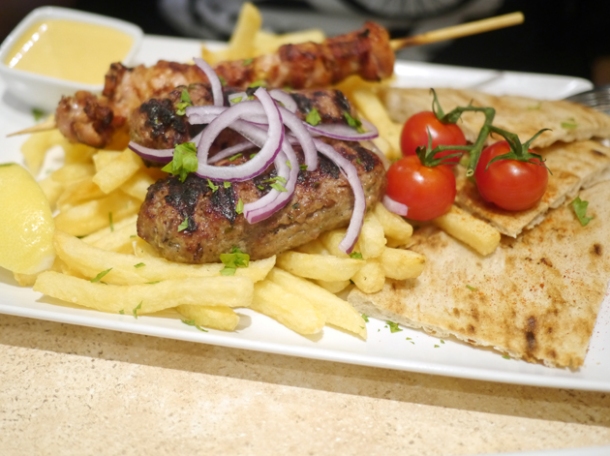 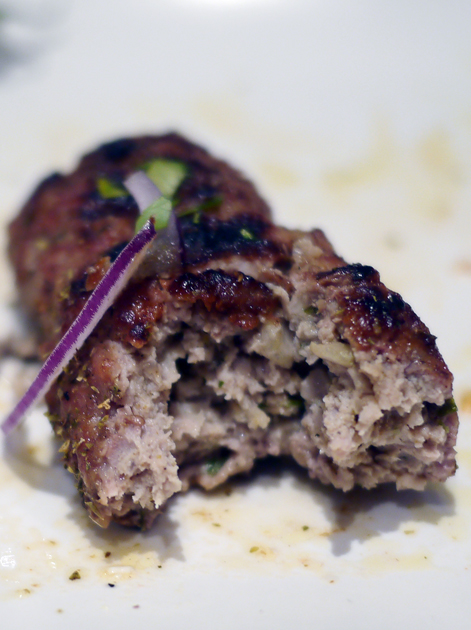 Mary had a little lamb. Emphasis on had.

The only dessert available is Greek yoghurt topped with your choice of toppings – I opted for honey and walnuts. The yoghurt itself was milkier and lighter than I was expecting, but still pleasingly creamy. The muted sweetness of the honey and the rather soft walnuts was disappointing though.

The food at 21 Bateman Street is hearty, filling and reasonably cheap. However, despite the small menu, not every dish was a winner. The Squelchie was reasonably satiated, although she didn’t get misty-eyed for her Hellenic homeland and even she reckoned a Green Lanes kebab meal is better value. Even so, 21 Bateman Street is still a fine choice for a quick, smoky, meaty feed before painting the town red or catching the night bus home.

What to order: Lamb and Chicken Souvlaki.

What to skip: Wild boar sausage.

Reservations: only accepted for groups of six or more

Average cost for one person including drinks when shared between three: £20-25 approx.