I’ve eaten at and written about the Hawksmoor mini-chain of steakhouses at length before on this blog. What makes Hawksmoor so interesting, apart from the sheer quality of most of the dishes, is that each branch is a little different from the others. For example, the Air Street branch does some excellent seafood dishes in addition to steak, while the Guildhall branch does a stonking breakfast. The Spitalfields branch is the original and one of its distinguishing features is it handsome bar which has a unique steak-free menu all its own. I’ve dined at the Spitalfields bar before, but a new menu necessitated a new visit with the aid of Templeton Peck and Vicious Alabaster.

I don’t drink, but Templeton Peck does and he chose the Marmalade Cocktail as his tipple for the evening. He enjoyed the concoction of gin, lemon, campari and marmalade. The generous splash of gin gave it a real punch, although Templeton still wished for more. It also genuinely tasted of marmalade – slightly bitter with a bit of a tang. 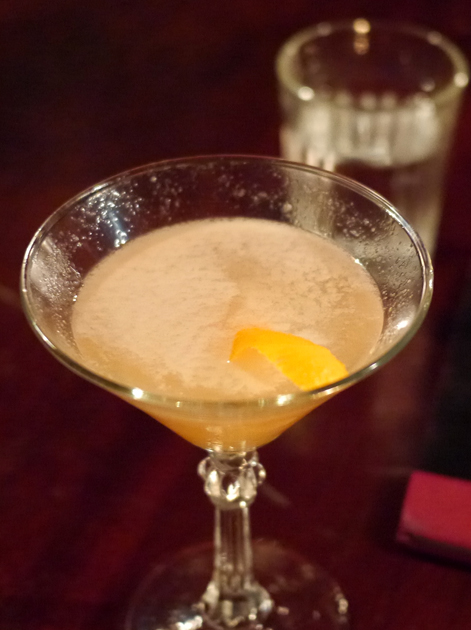 No Paddington, get off the sauce!

I opted for my favourite non-alcoholic Hawksmoor drink – the cornflake milkshake. A cool, intensely sweet and milky replica of that delicious puddle you find at the bottom of a bowl of cornflakes. Only a moron would turn his nose up at this beauty. 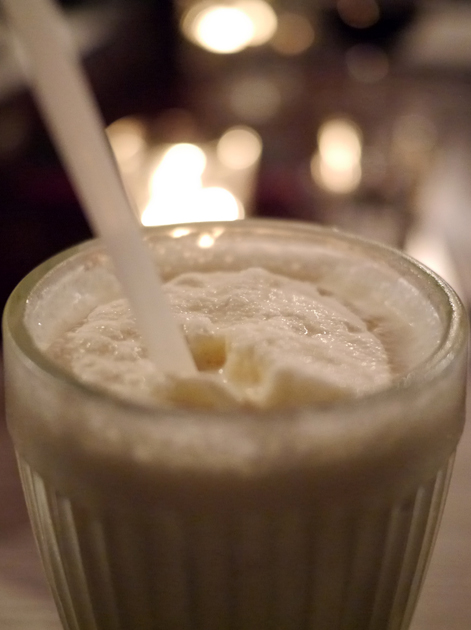 Templeton Peck and Vicious Alabaster engaged in a staggering level of gluttony that astonished even me. They started off with the ox cheek nuggets. The smooth crumbed, oil-free balls each had a filling of tender, earthy and meaty ox cheek and creamy, melted cheese. A moreish way to start a meal or an evening of drinking. 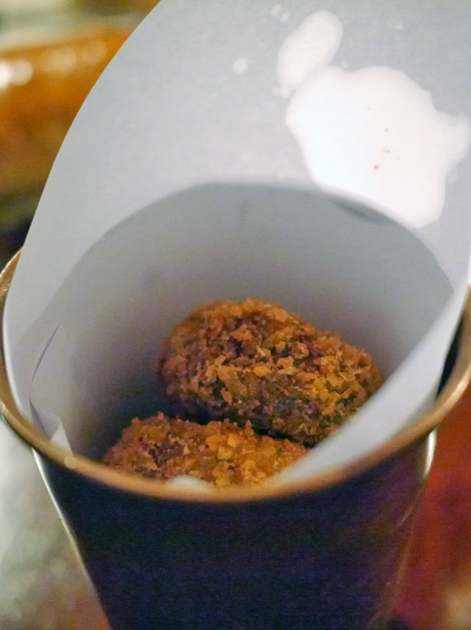 Partially Devoured. Think of them as a poor man’s Prairie Oysters if you like.

The dynamic duo moved onto the chilli cheese dog.  Vicious Alabaster in particular seemed taken with the thick, hearty, meaty weiner and its smoky moistness. Templeton also enjoyed it, but didn’t think much of the slimy chilli goo which didn’t have much heat to it. 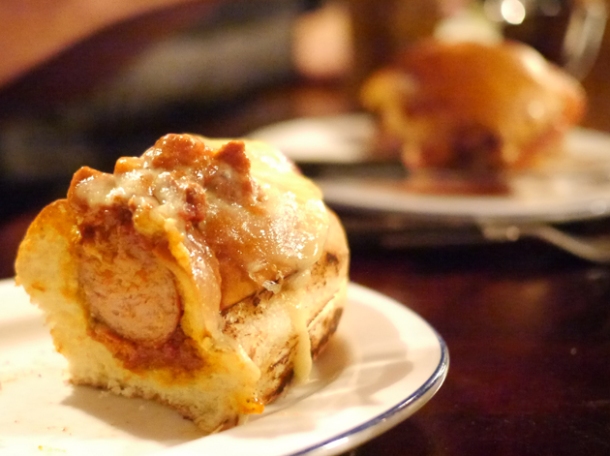 Templeton’s favourite dish of the evening was the cheeseburger. The smoothly ground patty was sweet, moist and tangy. It was smaller than the burgers at other Hawksmoors, but that also made it more manageable given the amount of food he was shovelling down his gob. Sorry folks, no photo of this one.

Vicious Alabaster is from Canada, so she was especially giddy about was the poutine – a Québécois dish of chips covered in cheese curds sourced, in this case, from Neal’s Yard. She was disappointed by the absence of gravy, a traditional poutine topping, but pleased by the addition of pig’s head meat. Although the soft floppy chips are a necessary departure from Hawksmoor’s usual super-crispy triple-cooked chips, they were still the least interesting part of this dish, merely providing a bed of carbs for the tender, flavoursome pork and the creamy curds which had an almost mozzarella-like elasticity. Filthy but lovely. 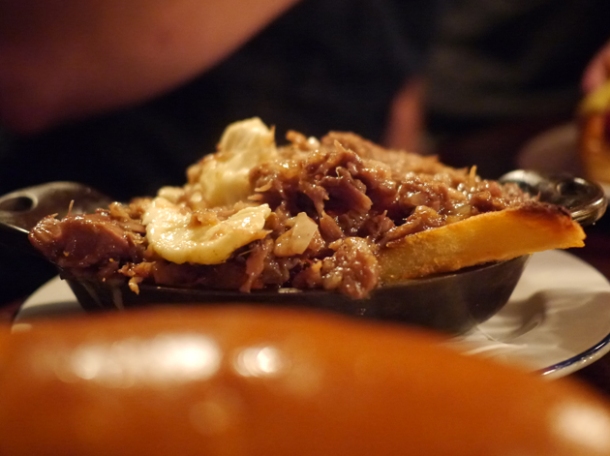 Both Vicious Alabaster and I had our own ox cheek French dip sandwiches as we’re incapable of sharing. Imagine the filling of the ox cheek nuggets, but in a sandwich, and you have the right idea. The soft and fluffy bun stayed out of the way, letting the meat and the creamy, viscous cheese take centre stage. The earthiness of the tender slices of ox cheek was enhanced by the sticky gravy. Excellent. 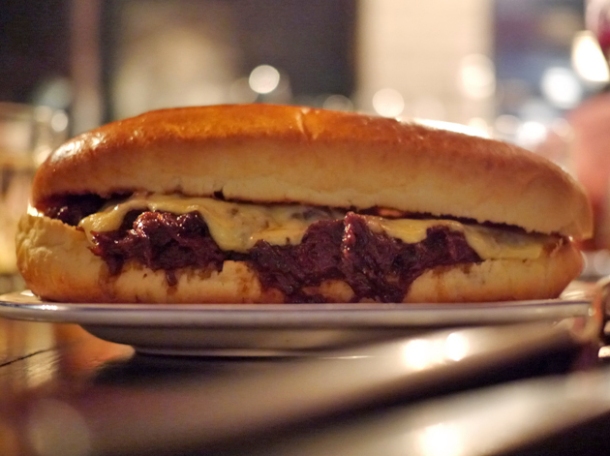 I wasn’t expecting the pulled pork bun to be as accomplished as a pulled pork dish from a good, dedicated barbecue restaurant, but it was surprisingly good. The fruity sauce mixed into the tender stands of pig enhanced their porkiness. Although the meat wasn’t very smoky, the tart and sharp topping of onions complimented the pork surprisingly well. 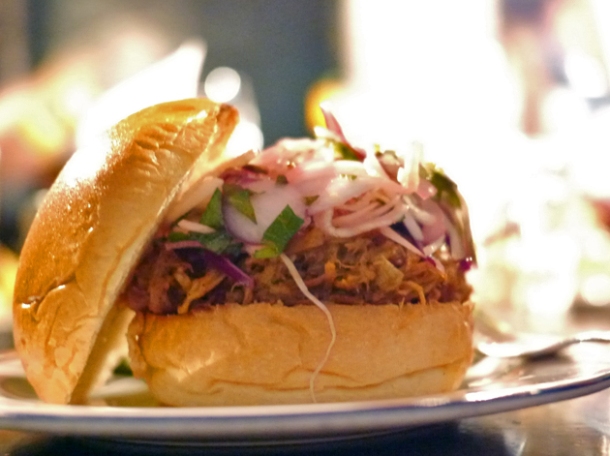 Too old to die young now.

The smashed cucumbers and watermelon turned out to be a much need refresher and palate cleanser after all that meat and cheese. Actually cubed rather than smashed, the sweet watermelon and oddly peppered but pleasing cucumbers did their job nicely. 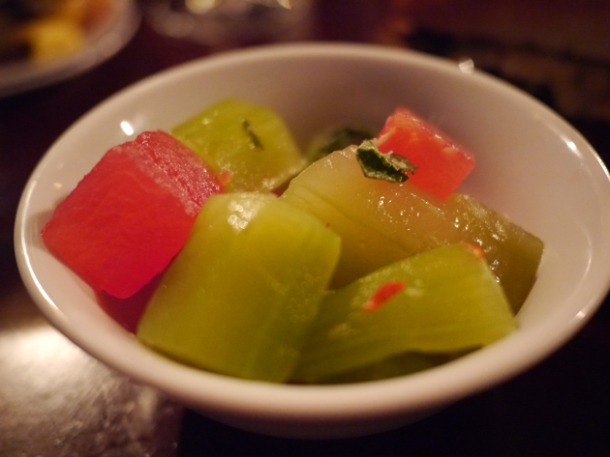 We somehow managed to make room for dessert, even after all that meat. Vicious Alabaster went for the sticky toffee sundae. I usually avoid sundaes, since they’re often little more than fodder for kids – layers of cold sweet nonsense topped by even more layers of the same difference. I should’ve had more faith in the kitchen though – the thick, treacle-like toffee was a delight, as was the malty, tangy taste of the cake chunks and crumbs. Even the ice cream was well-chosen – its clean, pure after taste providing a neat antidote to all that heavy sweetness. 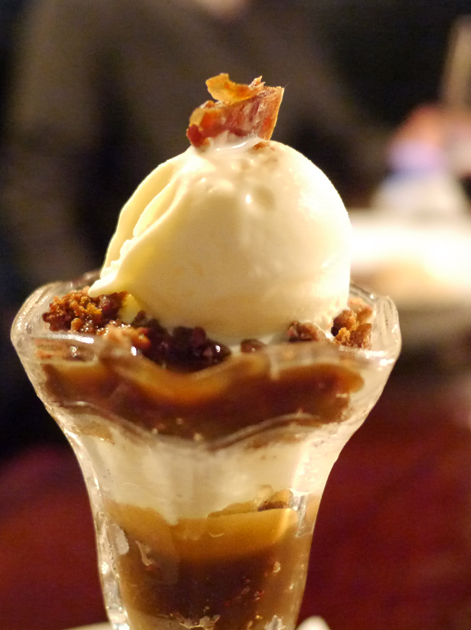 Both Templeton Peck and I had the peanut butter shortbread served with salted caramel ice cream. Surprisingly, the saltiness came not from the mildly sweet caramel-flavoured ice cream but from the warm and soft yet densely crumbed shortbread. Both combined delightfully with the dollop of thick, treacly caramel, the crunchy peanuts and a hint of chocolate. Although it’s a deconstructed Snickers bar, it’s a very good deconstructed Snickers bar using well-balanced textures and flavours to provide a sweet nostalgic kick. 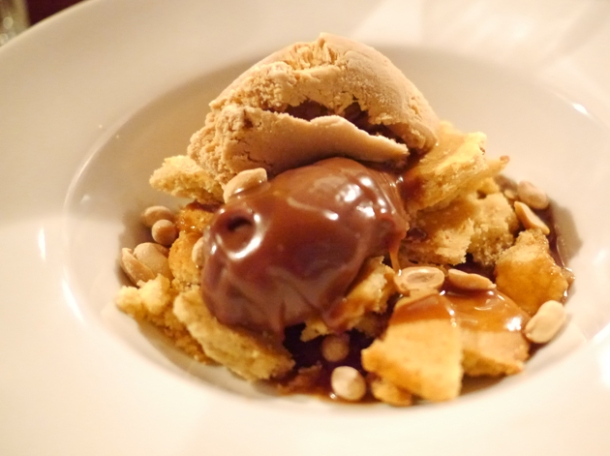 In a remarkable and spooky display of subconscious culinary group think, all three of us managed to order to a theme – meat and cheese. Although partially due to our shared culinary prejudices, it’s also due to the meat and cheese bias of the menu at the Hawksmoor Spitalfields Bar. Although the food is slightly messy with meat juices dribbling everywhere, this only adds to the convivial fun. It’s not cheap for bar food though, but it’s also far superior to the drab, dreary selection of olives, hummus, ‘tempura’, crudites and mini ‘burgers’ at other bars. Heartily recommended.

Total cost for one person including drinks: £40 approx. (A 50% off promotion is currently in effect until the end of June 2013. The price quoted here is what we would pay normally.)