A good burrito bar none?

Shoreditch High Street is dominated by Vietnamese restaurants, but that hasn’t stopped Death by Burrito from setting up shop just down the road. As its name implies Death by Burrito serves up mainly burritos, but all of its burritos are also available as tacos and there are also a few starters on the menu that don’t involve tortillas.

It’s worth bearing in mind that Death by Burrito isn’t really a restaurant, more of a bar that happens to serve food. Located inside the dimly lit Catch bar, there are only around 24 covers so it pays to get there early and to be prepared to wait at the bar if necessary. The staff are warm and friendly, but they’re rushed off their feet handling both the bar and the booth-like tables which exacerbates the waiting times even further. It doesn’t help that the staff are rather lenient towards diners who have finished eating and are just nursing an old drink or two. 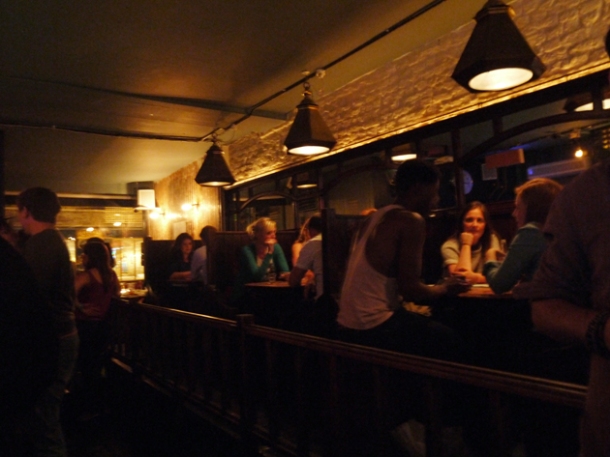 Death by waiting in the dark. 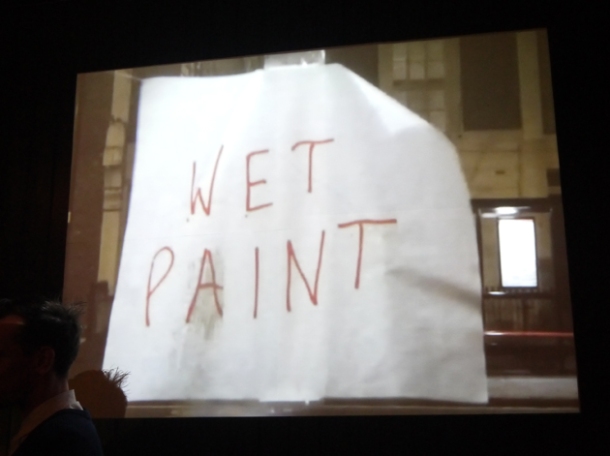 For some reason Death by Burrito have a projector screen next to their pool table showing this. I have no idea why.

Helping me sample a large chunk of the menu were Templeton Peck, Burrito Fiend and their slightly dazed and confused housemate. Since we wanted to save room for the burritos, we opted to share just one starter. After some raucous indecision, we settled on the crab cakes as the lowest common denominator that would please everyone. They were a little crisp on the outside, while the insides actually tasted of fresh crab. They’re not going to set the world alight, but if all crab cakes tasted like this then I’d probably eat them more often. 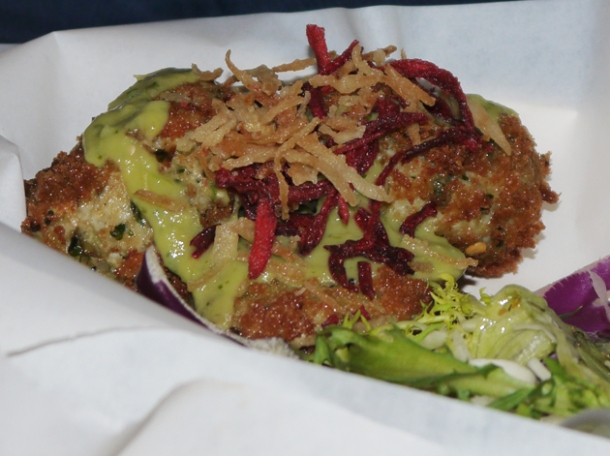 Sorry for the pants photos folks – the food at Death by Burrito isn’t nearly as greasy as my flash makes it look.

I wasn’t expecting much from the burritos, and I wasn’t in a forgiving mood either following the epic wait, but they were surprisingly good. Rather than the Californian-style burritos served elsewhere which are crammed to overflowing with rice and beans, the burritos here are stuffed with nothing more than your chosen filling and a little lettuce and tomato. Each burrito was relatively small and the variation in texture was somewhat lacking too, but the taste of each filling more than made up for it. Guacamole and other sauces are served on the side and the wheat flour tortillas are tightly wrapped so very little seeps out.

The kitchen was sadly all out of the grilled duck breast and chimichurri on the night of our visit, but the braised pork cheek was tender, moist, surprisingly light and blessed with a lightly zesty, herby dressing.

The beef and sweet potato burrito was just as moist as the pork version and the shreds of meat had a woody, smoky flavour that was pleasing, although not quite as impressive as the pork. There wasn’t much of the promised sweet potato though.

There was a similar problem with the grilled mushroom and squash burrito – there was very little squash to be had. At least the mushrooms were firm with a smooth, silky surface (sorry folks, no photo of this one).

The surprise hit of the evening was the fish and coleslaw burrito. I couldn’t identify the fish in question, but its soft and milky flesh went down a treat and was complimented well by the zesty slaw which wasn’t too creamy or sickly.

We also all shared a pair of braised pork cheek tacos. It was hard to enjoy the taste of the pork as it was smothered under a large amount of guacamole, coleslaw and grilled onions. It’s a startling contrast to the simplicity of the burritos which are far better. The only good thing about the tacos were the tortillas used – proper corn flour tortillas with a distinctively nutty, slightly sweet taste. 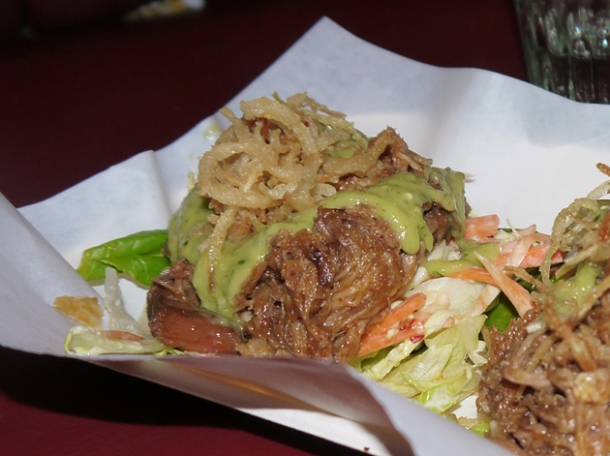 All of the burritos and tacos come with a helping of tortilla chips which are blue, but taste like standard tortilla chips. Guacamole and sour cream are served on the side (sorry folks, no photo of this one either).

While I was content to wash everything down with alternating rounds of Diet Coke and Red Bull, my dining companions slurped down a seemingly endless supply of alcoholic beverages. Templeton Peck was fond of the mint julep, while Burrito Fiend almost wet himself with excitement at the very sight of tuaca, a sweet, fiery liqueur with a caramel-like finish. They even found some energy to enjoy the free round of tequila which came courtesy of the bar staff as an apology for the long wait.

The burritos at Death by Burrito are surprisingly good, but they’re not quite good enough to make me want to endure the tedious waiting times and harried (if gracious) service all over again. If Death by Burrito can sort these issues out then it’ll be an eatery well worth seeking out, but as it stands go there early and have a backup plan just in case.