There might be a harsh slump ravaging the economy, but people still want to eat out – they just want to do it for less. One way for an enterprising restauranteur to cash in on this trend is to elevate a once-humble but still inexpensive fast food staple by applying some finesse in the kitchen. Burgers have received this treatment and it’s now the turn of the hot dog.

Dach and Sons is one of the first restaurants in London dedicated to hot dogs (as far as I know). It has an upper level cocktail bar, but as a non-drinker my interest was clearly focussed on the ground floor restaurant. It’s an attractive space with dark wooden tables and floorboards, tiled walls and the occasional funky light fixture. Service is generally friendly, although a tad slow at times. 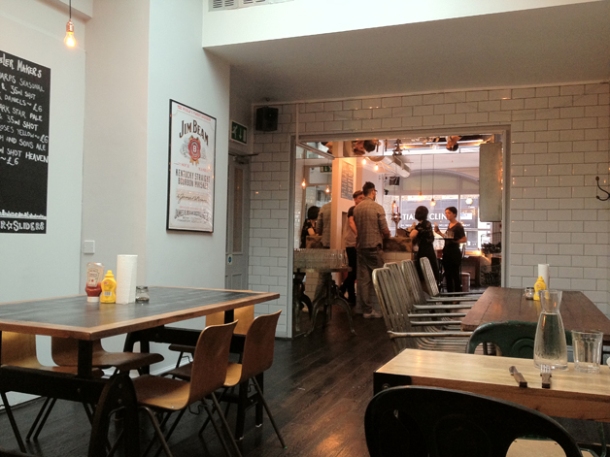 Is that a pun in the name ‘Dach and Sons’? The clever wags.

Although one can mix and match the mains and side dishes any which way one pleases (mains cost £8 each and sides are £4 each), small savings can be had by having just a main and side (£11.50) or a main and two sides (£15).

On my first visit to Dach and Sons I had the assistance and company of The Euro Hedgie. I started at the top of the menu and ordered the beef Dachshund topped with sauerkraut and tomato ketchup. The dog itself is surprisingly small, but the intensely beefy taste makes up for this and the fluffy bun doesn’t get in the way of the dog. If you’re used to the heavily processed, extremely smooth texture of mass market hot dogs, then the mildly coarse texture of the Dachshund will come as a surprise. The beefiness of the dog is complimented well by the tartness of the sauerkraut, so much so that I wonder why sauerkraut is more often served with pork rather than beef.

No actual dogs were harmed in the making of this hot dog.

My side of salt beef chilli is a rather simple dish. It has a moderate kick to it, but it’s not for you if you’re looking for multiple layers of tingly spice – it’s very much in the vein of a chilli con carne. There’s no quibbling with the tender slithers of beef though or the beans which have just the right amount of firmness.

A chilli con carne by any other name would be just as chilli?

Sadly the Hedgie’s own side dish was deeply disappointing. The tantalising bone marrow, salt and thyme popcorn tasted like plain, ordinary popcorn. We thought we were missing something, but as far as we could tell it was just simple, bland popcorn. 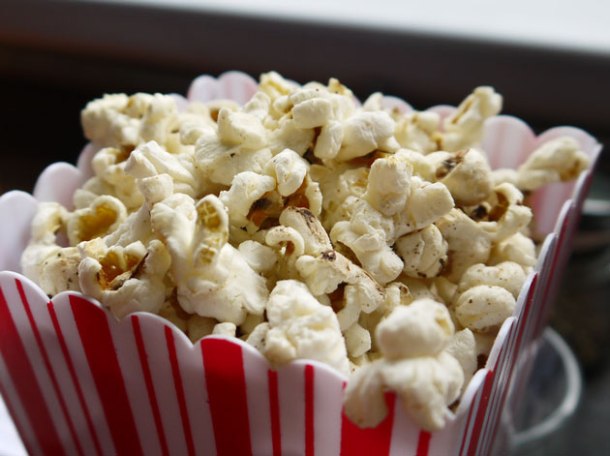 A bitter letdown, but at least it’s still cheaper than some multiplex popcorn.

The Euro Hedgie and I were divided over his main course. Rather than opting for one of the hotdogs, the Hedgie opted for the burger instead. The mildly coarse patty was cooked medium rare and was moist with a slight chewy edge. It’s relatively small compared to some other burgers, but at least one can eat it without getting too bloated. This means there’s also less for the fluffy bun to contain and hold together, but the bun also gets in the way of tasting the meat – I’m not sure whether this is due to its slight sweetness or something else. While we both agreed the beef was lacking somewhat in character, I still thought this was one of the better burgers in London while the Hedgie was underwhelmed.

The Hedgie wasn’t fond of Dach and Sons’ own-brew beer, describing it as soapy and foamy. Which doesn’t sound like a good thing.

Dach and Sons tickled me enough to prompt a second solo visit. The Lean Dog is made from chicken rather than pork or beef and as a result it isn’t as heavy as a red meat dog. It has a herby, peppery, lightly mustardy taste to it that’s quite pleasing and the taste isn’t obscured by the fluffy bun. Like the Dachshund, it’s mildly coarse. 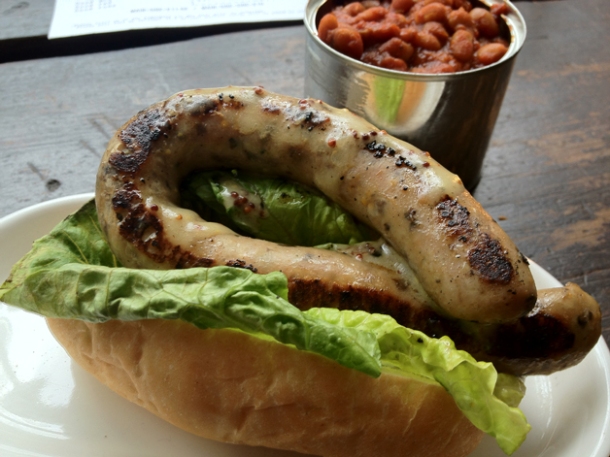 Did they run out of the extra long buns?

Despite the funny name the frickles are nothing more than battered, deep fried cucumbers and pickles. Sweet and tart flavours dominated, but the thick cut of the slices also helps emphasise their surprising creaminess. The thin batter is a little too oily for my taste, but it’s still quite light and not at all stodgy. Overall though, the frickles aren’t as addictive as the crack-laced deep fried pickles at Meatliqour.

Well this is a right pickle.

You’re a bit thick, aren’t you?

I wasn’t expecting much from the baked beans, so I was pleasantly surprised both by the firmness of the beans and their sweet, fruity taste.

I had an intense meat craving on my third and final visit to Dach and Sons so I decided to order two hot dogs and one side dish, expecting the modest proportions of the other dogs that I had already tried. This almost turned out to be more than I could handle as the Banger and the Hot Dog are noticeably chunkier than any of the other dogs.

The Banger is made from pork shoulder and topped with onions and mushroom ketchup. It’s very coarse and is essentially a good ol’ British sausage. It’s intensely meaty with a sweet, almost smoky quality to it. This is complimented beautifully by the sweet onions and the lip-smackingly moreish mushroom ketchup. A must-have.

The Hot Dog is also made from pork, but bears a strong resemblance to a North African mutton/lamb merguez sausage. It’s coarse but not too crumbly, unlike some merguez sausages I’ve had. It’s tangy with a mild heat that’s still tingly enough to be interesting yet simultaneously tame enough to not offend anyone but the most pathologically spice intolerant. The tingly heat of the sausage is complimented superbly by the almost berry like sweetness of the tomato slices. 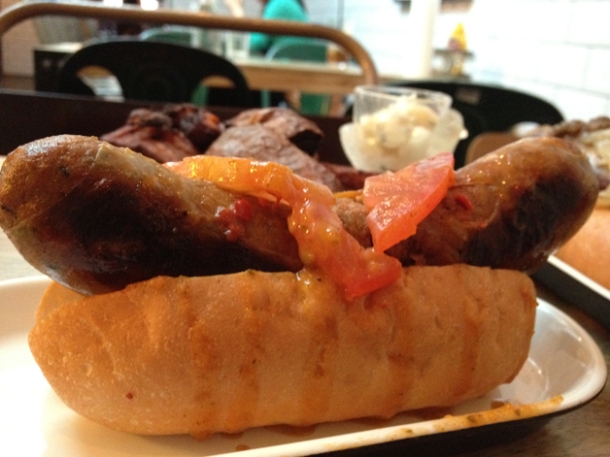 Well, this should be different.

Despite my near meat overdose, I still managed to find room for the sweet potato wedges. They’re not quite as buttery and sweet as the sweet potato fries at Kua’aina, but they’re still very moreish. There’s no faulting the texture though – the best wedges have a charred crispiness that gives way to a soft fluffiness that’s a joy to behold.

The thin end of the wedge.

If I had not made my third visit to Dach and Sons then I would’ve concluded that it was a place serving up pleasant if ultimately unremarkable comfort food that would be ideal for the locals, but not worth seeking out otherwise unless you were in the area. The Hot Dog and the Banger change all this though – they are well worth seeking out and deserve to be Dach and Sons’ signature dishes. I’m getting mildly hungry just thinking about them, but it’s a shame the rest of the menu isn’t as accomplished.

Dach and Sons won’t have the tarted up hot dog market all to itself for long though – a competitor called Bubbledogs is due to open soon in Soho and it will be interesting to see if the menu at Dach and Sons changes not only in response to the competition, but also with the times.