Thanks to the instant noodle convenience food that shares its name, ramen isn’t the most glamorous of dishes, but it can be surprisingly difficult to get right. The imaginatively named Tonkotsu on Dean Street is a new restaurant that eschews sushi and katsu curries, concentrating solely on this underappreciated noodle soup dish. 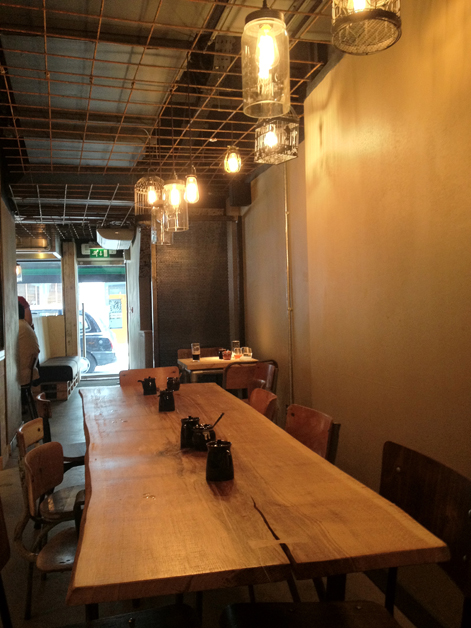 A semi-communal table on the ground floor of Tonkotsu.

Tonkotsu may be located in Soho on the site of a former creperie (and before that, an ill-fated sushi restaurant), but its décor feels more Shoreditch-esque with its mixture of funky lighting fixtures, bare walls, exposed ceiling ducts and wiring, mismatched semicommunal wooden furniture, Japanese tapestries and funky background music. The few dozen covers are divided between two floors. Although the bar surrounding the preparation area filled with cauldrons of broth is on the ground floor, the first floor is less gloomy with its bigger windows. 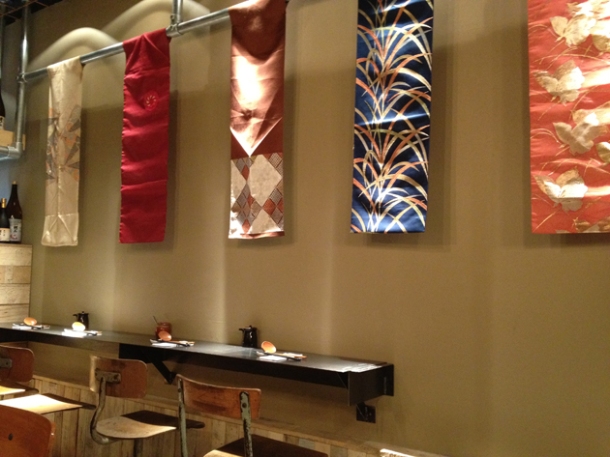 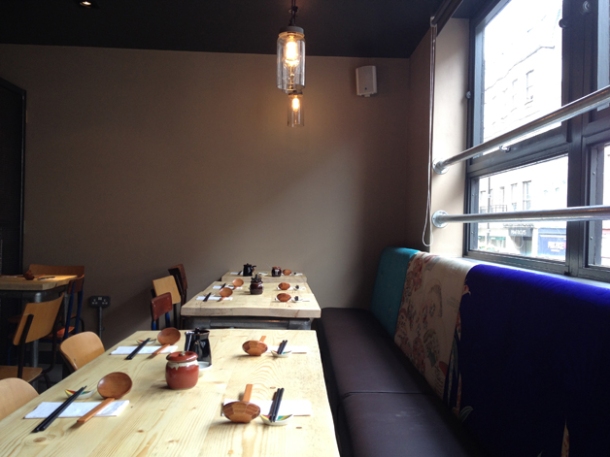 Let there be light. 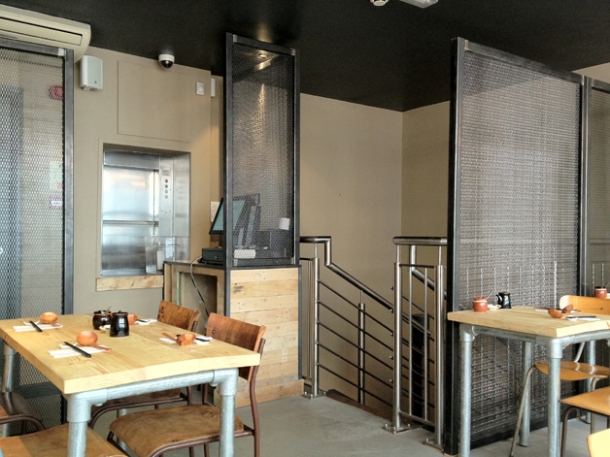 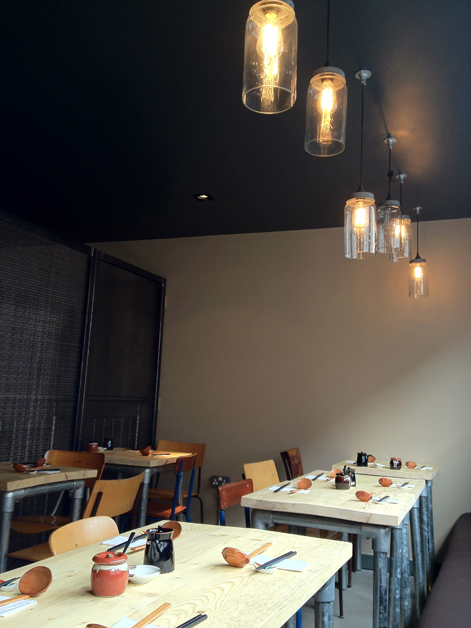 Somewhere out there is a funky light fixtures dealer making a killing.

It would be a crime to visit Tonkotsu and not have the eponymous ramen dish itself. The slow-cooked pork broth is a thing of beauty with layers of lip smacking salty meatiness that almost has a creamy quality to it which is emphasised by the rich, runny egg. The ramen noodles themselves have a firm bite, the seaweed has a springy consistency while the thin slices of pork are fatty and salty and the bamboo shoots have an odd but pleasing chewiness. If a noodle soup can be decadent, then this version of Tonkotsu ramen would be it. 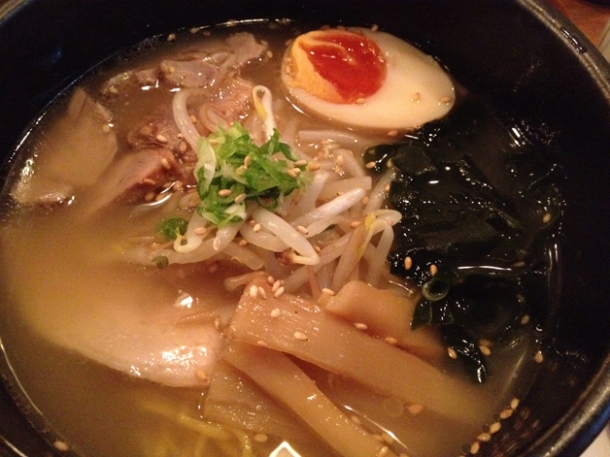 Tonkotsu may serve nothing but ramen as main courses, but there is a small selection of small dishes that are well worth trying. The pork and prawn gyoza are the best Japanese dumplings I’ve had yet in London – the thin yet sturdy skins are supple one side and a crispy, golden brown on the other. Even better is the filling – the kitchen hasn’t skimped on the prawn of which there is a surprisingly large amount and is both fresh and firm. 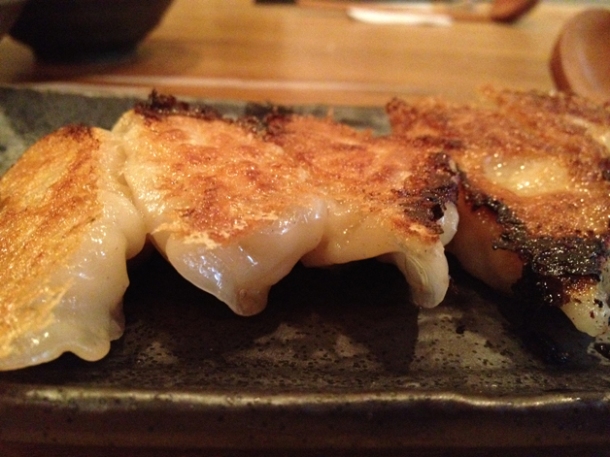 The hiyayakko tofu is an acquired taste which will appeal most to tofu addicts. The milky tofu has a very soft and crumbly texture and is topped with chewy Katsuobushi tuna flakes. It’s a light dish perfect for a hot summer day. 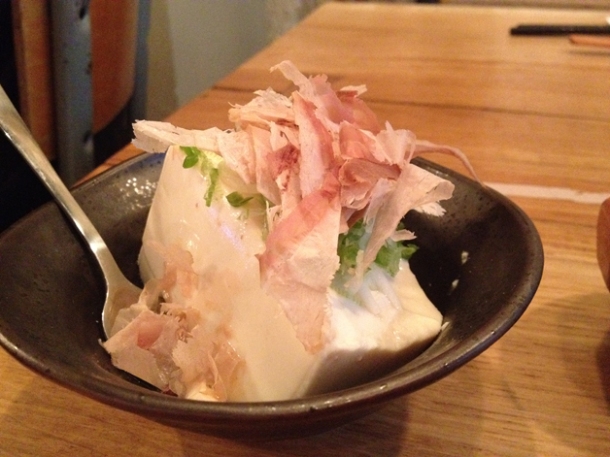 Do you do tofu?

Despite the small menu, I ended up going back to Tonkotsu several times as I slowly became more and more addicted to the ramen. The Tokyo Spicy ramen isn’t spicy in the slightest, although this can be remedied with the pot of chilli and garlic sauce on the table. The deliciously savoury, meaty broth tastes of chicken and there are generous dollops of both chicken and pork along with a rich, salty egg, firm noodles and chewy bamboo shoots. It all comes together very nicely. 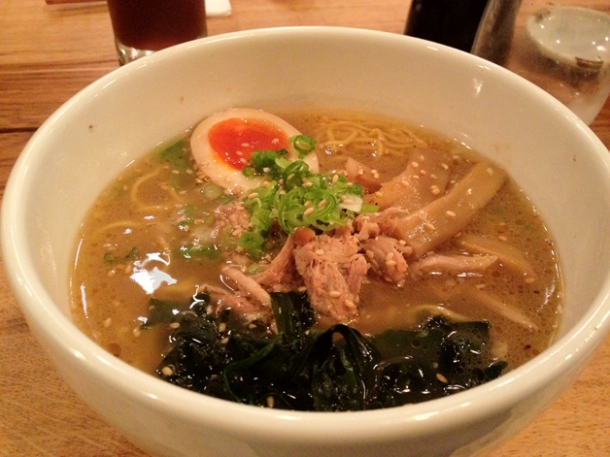 The skins of the shiitake gyoza were a little too soft for my liking and could’ve done with more time in the pan. The filling more than makes up for this oversight though – the rich earthiness of the shiitake mushrooms is balanced nicely by the crisp, refreshing beansprout shoots.

The spinach and sesame salad could’ve done with an extra dosage of sesame seed oil to give it more punch, but it is a refreshing counterpoint to the meatiness of the Tokyo Spicy ramen. 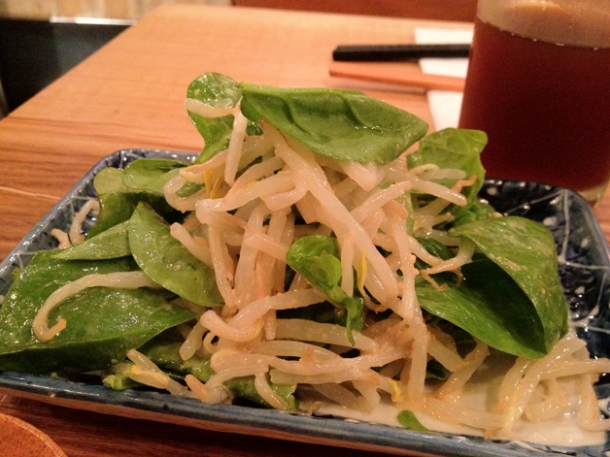 Three is the magic number?

If there’s one weak link in Tonkotsu’s menu then it’s the third and final ramen dish, the mushroom miso ramen. This may be carnivorous prejudice speaking, but the vegetarian broth just doesn’t have the same depth of flavour as the broth used in either the Tokyo Spicy or the tonkotsu. At least the ramen noodles are firm and the mushrooms have a strong, earthy flavour. 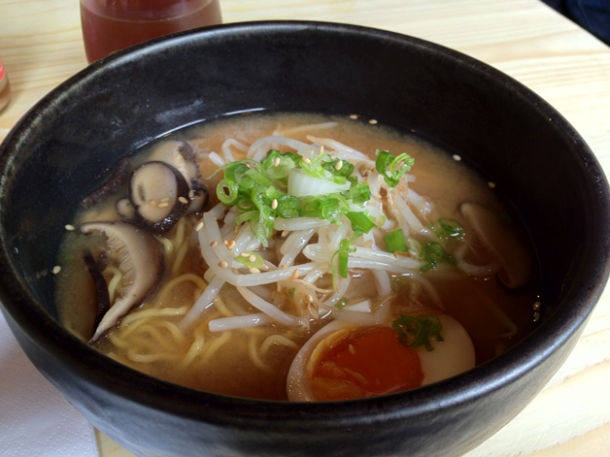 Sometimes the vegetarian option really is the poor relation. 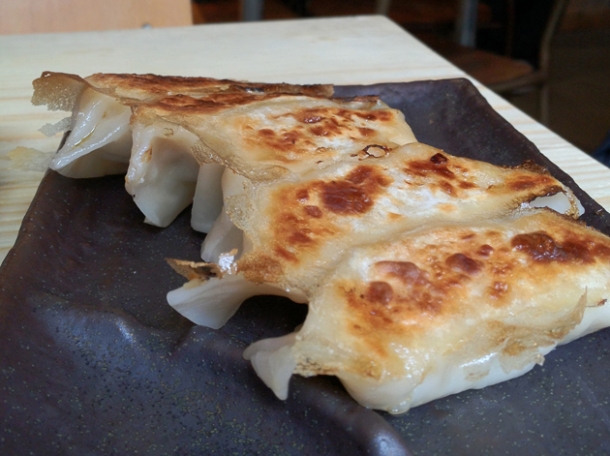 This little piggy went to market. And was never the same again.

A more satisfying meaty kick came in the form of the chicken karaage. Although these chunks of fried chicken were a little bit too oily, they were also moist with a crispy coating that had a well-judged ginger kick that was neither too overpowering nor too weak. 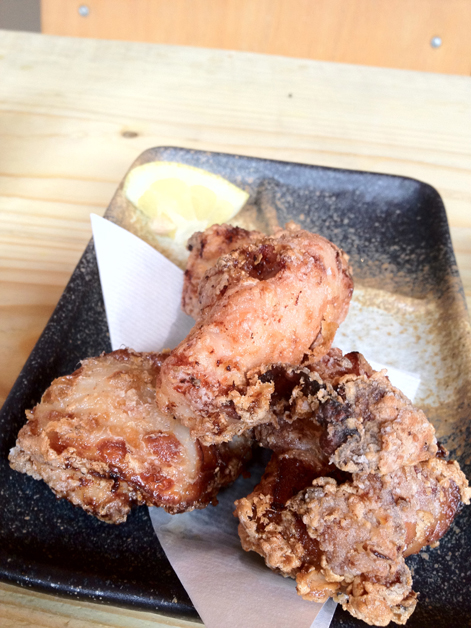 Fried chicken, but not as we know it.

An unusual way for non-drinkers to wash everything down is the Dalston cola, a cola made using nothing but a host of natural ingredients including kola nuts. Despite its long list of ingredients, the overall taste is highly reminiscent of sarsaparilla (I’ve only seen sarsaparilla soft drinks in places such as Taipei and Hong Kong), which itself is somewhat similar to modern root beer and is very much an acquired taste. 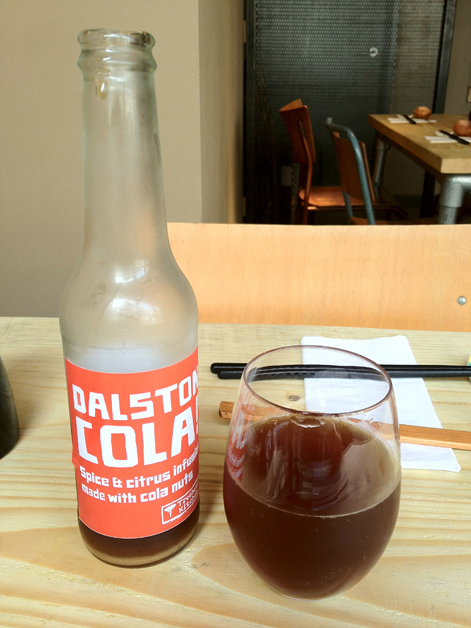 I could make some kind of joke about Dalston pretentiousness, but that would be so obvious so I’m not going to.

Up until this point I had dined at Tonkotsu alone, but for my fourth and final visit I had a second and third opinion in the form of Socialist Worker and Templeton Peck. They both agreed that the Tonkotsu ramen was a fine, lip smacking bowl of noodles in soup. They also both enjoyed the fresh and firm fillings of the pork and prawn gyoza, but Socialist Worker seemed far more ambivalent about the hiyayakko tofu judging them to be not proletarian enough. The lightly salted edamame tastes just as you would expect. 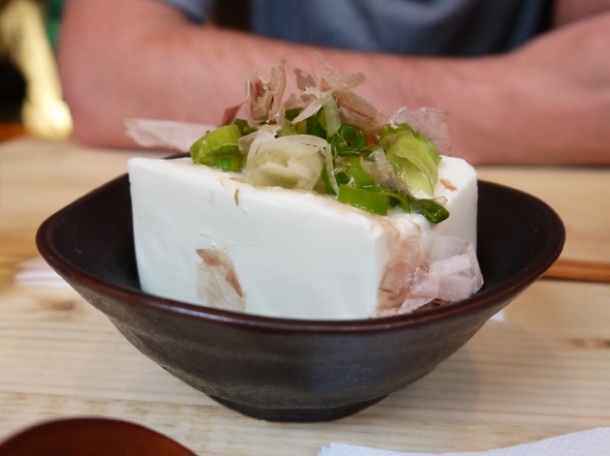 If you’re expecting to see more photos of gyoza and Tonkotsu ramen, then I’m afraid I ate them all before I could remember to take some photos. Here’s a nice photo of tofu instead. 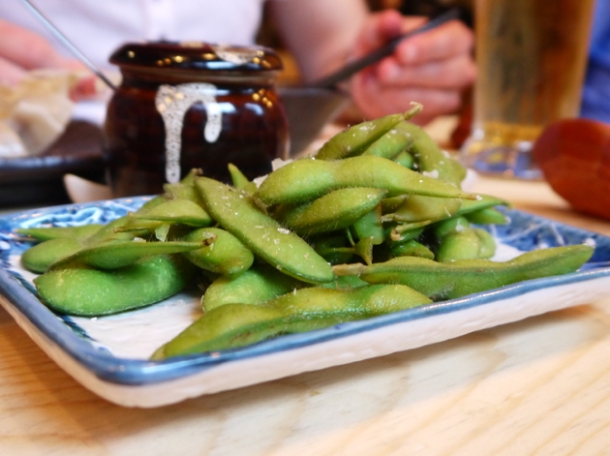 The things they do with soybeans eh?

One of the advantages of bringing Socialist Worker and Templeton Peck along (besides comparing their facial hair at close range) is their penchant for booze. Tonkotsu has an intriguing selection of both local microbrewed and big-label Japanese beers as well as sakes and shochus, but Socialist Worker opted for the safe choice of a draft Asahi which he seemed to enjoy. Templeton Peck went for the more interesting tipple of a 12 year old Yamazaki whiskey. Peck didn’t encounter the smokiness he was expecting, but still relished the sweet, light and woody flavours of his drink. 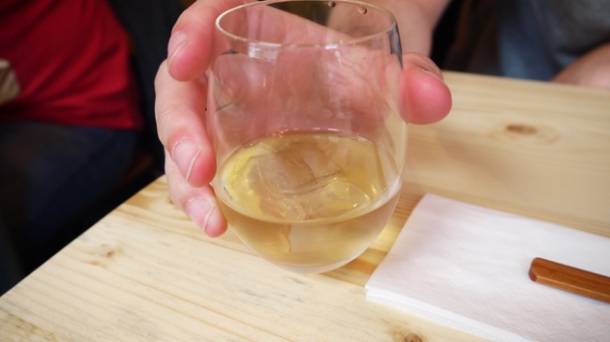 Despite a few hiccups, the food at Tonkotsu is very satisfying – rival ramen restaurant Ittenbari is but a distant second. Upcoming Soho ramen rival Bone Daddies will have to try even harder to impress with such strong competition. The main snag isn’t with the food, but with the price. £10-11 for a bowl of noodle soup isn’t much to pay, but once you’ve added on a pair of side dishes and a drink or two and you can easily exceed £30 or more which is reaching haute cuisine pricing. This can seem a lot for noodles, but is a price well worth paying for such well-crafted food so get over it, save up and get down there.

Total cost for one person including drinks: £30-40 approx.