The Seven Dials Covent Garden branch of Hawksmoor is perhaps my favourite of the three thanks to its elegant, iron colonnaded interior. It’s the one I visit most frequently since it’s actually located somewhere readily accessible, unlike the Spitalfields branch, and isn’t full of braying City boys, unlike the Guildhall branch. 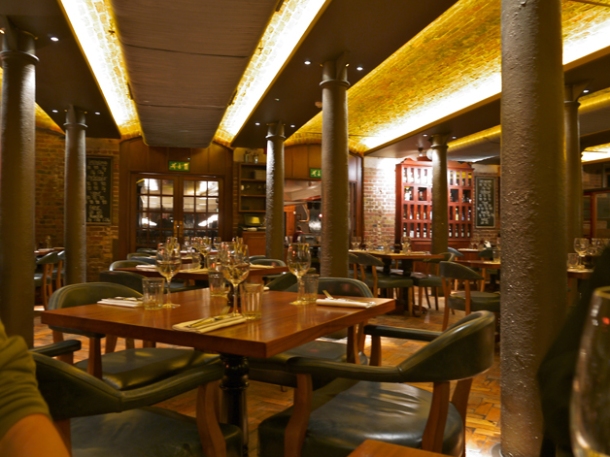 Although steak is available for breakfast at the Guildhall location, steak just doesn’t appeal to me first thing in the morning and I still wasn’t minded to have it for lunch either. Instead I opted for the third burger which, unlike the standard burger and kimchee burger, changes every month at the Seven Dials branch. This month it’s an otherwise standard burger topped with an intriguing sounding mix of black pudding, mushrooms and a touch of horseradish.

Sadly, it wasn’t anywhere near as interesting as it sounds. The beef patty itself, cooked medium rare, was as good as ever – a moderately coarse grind that’s moist, meaty, teased with a hint of nuttiness and encased in a glazed, crisp brioche-like bun. The melted melange of black pudding and mushrooms wasn’t as successful though – there was only a hint of horseradish, if any at all, and the dominant taste was of a one-dimensional saltiness that left my mouth feeling very dry, as if I had just slurped up a vat of MSG. It’s the least successful Hawksmoor burger I’ve had to date. 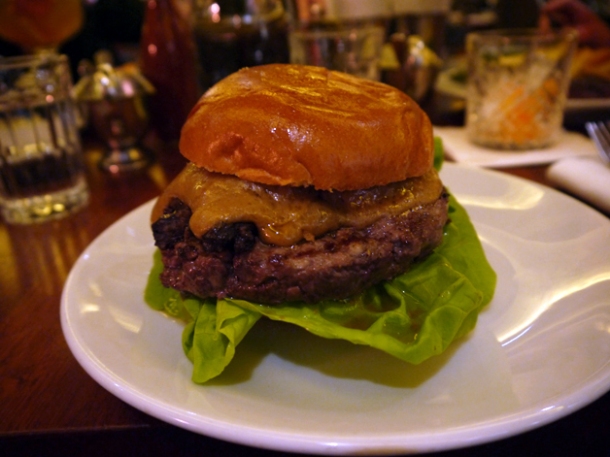 The burger consisted of around 250g of beef though, so I was glad I had cheated by disavowing chips on this occasion in favour of the simply described ‘lettuce’. The green leaves here were livened up by some sharp spring onions, a tangy vinagrette and refreshing sprigs of mint too.

The Euro Hedgie plumped for a 300g serving of filet steak cooked rare. As expected, it’s a thing of beauty – perfectly tender and evenly cooked. There was really no need to slather it with stilton sauce as the Hedgie insisted on doing.

And the cow jumped over the moon...

The Hedgie chose to pair the filet with macaroni and cheese which was surprisingly good. The melted cheese was more milky than creamy and didn’t suffocate the small shells of pasta which were neither too soft nor too hard – just right.

You won't find this in a packet...

While I was content to wet my whistle with an icy cold cornflake milkshake, surely Hawksmoor’s best non-alcoholic beverage, the Hedgie decided that he wasn’t tipsy enough and needed to boost his alcohol levels. The little blighter was dwarfed by his monstrous Zombie cocktail – a magnificent mix of several different types of rum, brandy and exotic fruit juices. He somehow managed to slurp it all down without immediately wetting himself and declared it to be one of the best Zombies he had ever had. 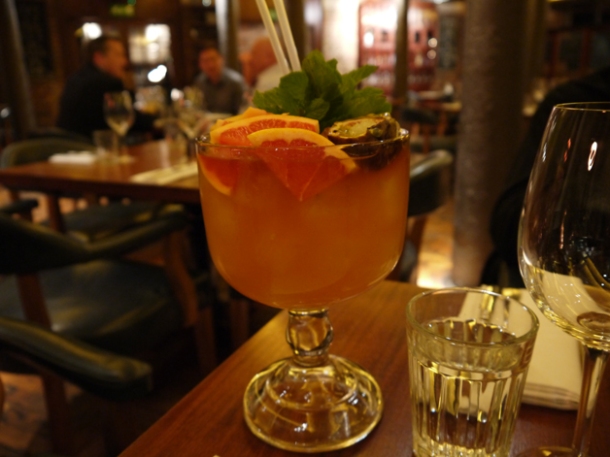 Look at the size of that thing! Cut the chatter red two!

The Hedgie was starting to feel a little sleepy though, so he also ordered a Climpson’s Martini – a bizarre sounding drink of coffee, coffee liqueur and vodka. To the Hedgie’s slightly boozy brain, it tasted much like a standard iced coffee with little detectable alcohol. This may well be true as he seemed perked up by the drink. I was tempted to have a sip, but thought better of it.

Although April’s third burger wasn’t anywhere as successful as past specials, the underlying beef patty itself is great and the steaks are still first class. Plus: cocktails for everyone!

I feel a bit like John Prescott – sleepy and sluggish, but I can still punch you in the face when you least expect it.

Total cost for one person including drink: £20-25 approx. for burgers with non-alcoholic drinks, £45-50 approx. for steak with alcohol