I’ll tell anyone who will listen about the superb steaks and burgers at Hawksmoor, but just to reinforce the point I decided to pay another visit to the Covent Garden Seven Dials branch one weekday lunchtime. The Euro Hedgie and I managed to snag a table next to the dramatically lit staircase leading from the ground floor reception down to the clubby bar and vaulted dining room. Service was noticeably more efficient compared to our last visit, although weekday lunchtimes are bound to be less hectic than Sunday brunch.

I love the chateaubriand steaks at Hawksmoor, but I was determined to resist its siren lure and opt for the much vaunted kimchi burger instead. I wasn’t disappointed with the juicy, succulent, intensely meaty patty cooked pink which was paired with a hearty helping of kimchi. The kimchi here was sour with a firm bite to it, but wasn’t especially spicy. Usually, this would be a cardinal sin against kimchi, but that was exactly what was required here – too much spice would’ve drowned out the flavoursome meat. It was an intriguing contrast in flavours and it was all held together beautifully by the crisply toasted bun. 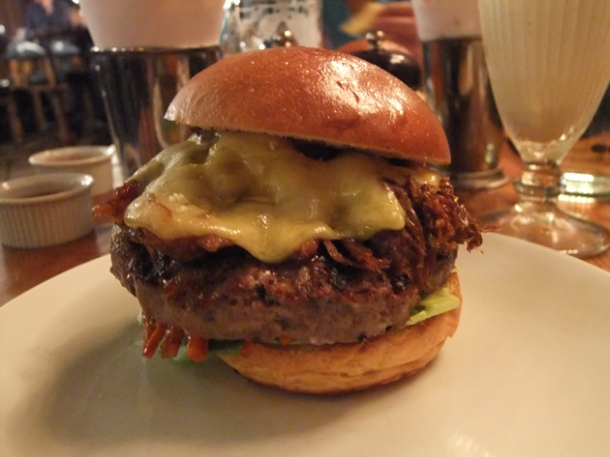 A kimchi burger. Not as crazy as it sounds.

Alongside the kimchi burger Hawksmoor offers its standard burger and a rotating ‘Third Burger’ that changes every month. The Third Burger during our August visit was a southern fried chicken burger with Caesar dressing which the Euro Hedgie plumped for. The Hedgie was surprised by the huge chunk of breast meat which was lightly seasoned and not too peppery. It was complimented by the tender strips of back bacon which had a surprisingly soft chicken-like texture to them, while the lettuce and ranch-style Caesar dressing sat at the bottom so the whole thing didn’t become too soggy. Although the Hedgie enjoyed the chicken meat, he would’ve preferred the dark meat of a deboned thigh.

It turns out the Euro Hedgie prefers thigh to breast. Pfnarr.

Naturally, we both chose triple cooked chips to accompany our burgers. The triple cooked chips, while my favourite, always seem to be a little different every time I visit Hawksmoor. This time they were a little crispier and a touch oilier too, which the Hedgie prefers but I don’t, although the contrast between the crisp exterior and the fluffy interior is still remarkably beautiful. 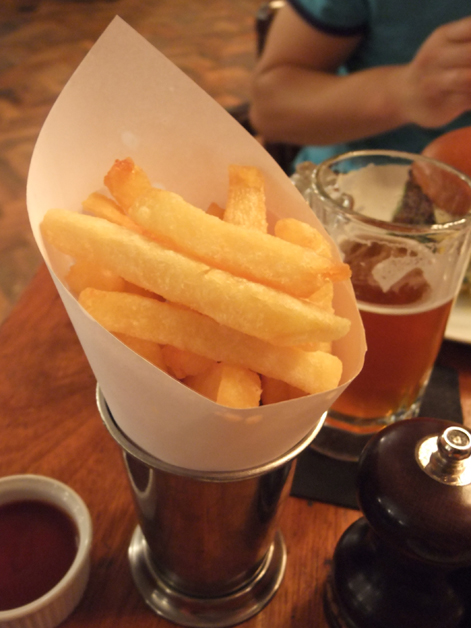 I washed it all down with the delicious and refreshing cornflake milkshake which magically captures the flavour and smell of a bowl of cornflakes in a milkshake. The Hedgie was saddened to learn that Hawksmoor’s own custom brewed pale ale was now unavailable and had to settle for the custom brewed red rye ale instead. He seemed unimpressed with the icy, bitter brew though. 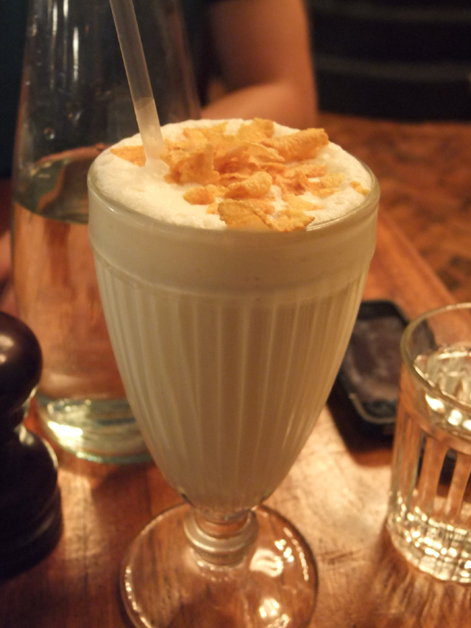 Let me count the ways I love you...

If there are better burgers in London, then I have yet to taste then. Hawksmoor – go now.

Total cost for one person including drink: £25-35 approx.