Eating Valencian food in Madrid may seem a little peverse (the Spanish capital is quite a distance away from Valencia on the dry Castillian plains in the centre of the country), but according to some of my sources La Barraca is supposed to be one of the better Valencian restaurants in Madrid. The decor won’t be to everyone’s taste though – the walls are festooned with kitsch ceramics, paintings and other paraphernalia. I suspect if you let an especially dotty Valencian grandmother decorate a restaurant, La Barraca is what you would end up with. The look may impress some tourists, but it struck me as more than a little cheesy. 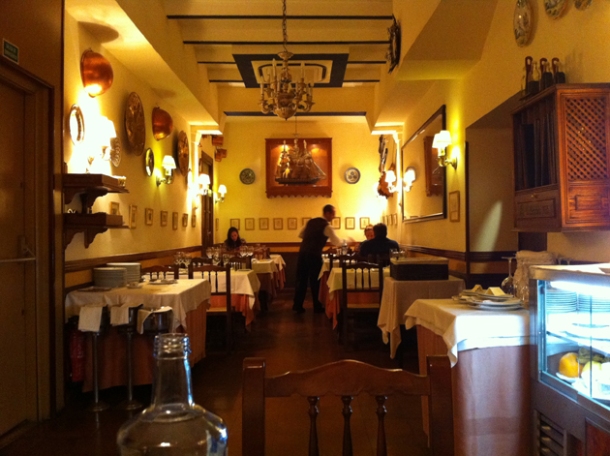 The service was also not quite what I expected. The efficient waiters and waitresses were always quick to clear away old dishes, bring me more water and so forth, but were severely lacking in warmth and friendliness – the experience was similar to being served by an army of especially frosty Terminators. I don’t think it was a language problem since many of them were keen to dispense with my faltering Spanish and converse in a high standard of English.

For my starter I chose anchovies with tomatoes on toast which appeared on my table in a worryingly short amount of time. My concerns were soon justified – it was so bad I was severely tempted to send it back. Although the anchovies were fairly salty, the texture was far too soft and the tasteless, chilled tomatoes had clearly been plucked straight from the fridge. Even worse was the toast which tasted more like stale bread that had hardened after having being left out on the counter for too long. Compared to the superb anchovies available at Terriors back in London, La Barraca’s attempt was shockingly bad. 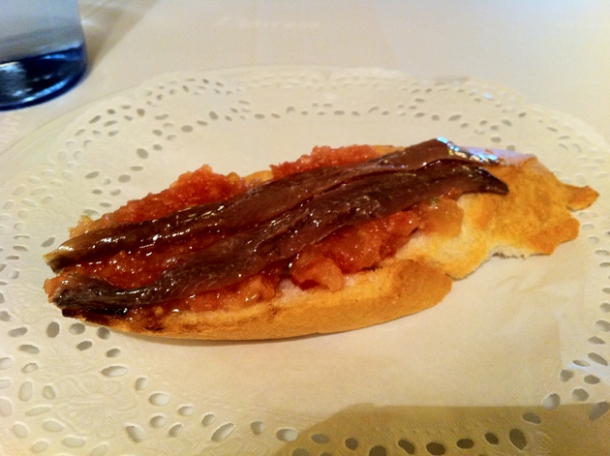 Thankfully my main course of mixed paella was a considerable improvement over the disastrous starter. In amongst the buttery rice were chunks of smoky chicken on the bone and even smokier fatty cuts of pork. The prawns and mussels, still in their shells, tasted bitingly fresh although the blobs of generic white fish and squid were a little bland. Somehow the disparate ingredients all come together for a satisfyingly hearty main course. 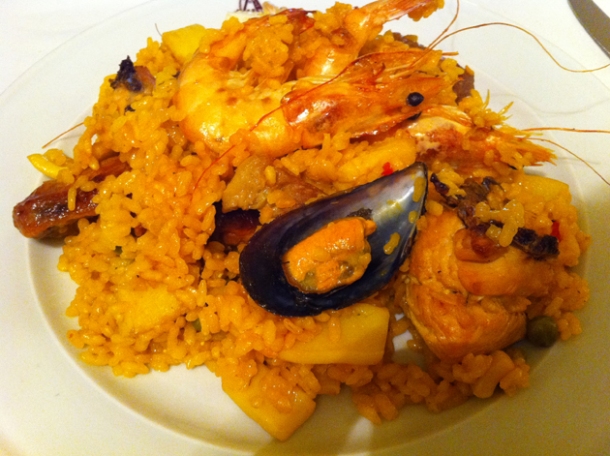 I’m getting hungry just looking at this.

The portion of paella was absolutely huge, even for a glutton like me, and was served from a huge wok-like carrier which meant I didn’t have room for dessert. This was probably a good call even if my stomach wasn’t fit to burst – the array of generic-looking pre-made desserts in the visible chiller cabinet did not look promising.

My experience at La Barraca was mixed at best – the paella was good, but I would be surprised if it was the best paella available in Madrid. My anchovy starter was deplorable though and the service, while efficient, wasn’t very welcoming. The paella saves La Barraca from a lowly two star rating, but I suspect if I find myself in Madrid again with a paella craving then I’d try somewhere else first before returning to La Barraca.

Total cost for one person including soft drink: approx. €33 (approx. £30 at time of writing)