This is no mere curry house.

Apparently there is a franchised chain of restaurants in India called Moti Mahal that specialises in tandoori dishes, but this Moti Mahal isn’t one of them as far as I can tell. Whereas the Cinnamon Kitchen, the last high-end Indian restaurant I went to, had a contemporary twist on Indian cuisine, Moti Mahal is far more traditionalist. Although you’ll find old favourites like rogan josh on the frequently changing menu, the emphasis is on lesser known dishes from around the entire subcontinent.

Although the decor was inoffensively plain, service was polite, efficient, attentive and very helpful. My waiter, whom I’ll affectionately refer to as Mumbles, struggled to make himself heard but thankfully this wasn’t a huge problem in the subdued dining room which is spread over two floors. It was a little stuffy though, so cranking up the air conditioner would’ve been a good idea. The clientele on my midweek visit was a mixture of couples and businessmen, including an unintentionally hilarious group of American executives getting to grips with Indian food for the first time. I know it’s rude to laugh, but sometimes it’s hard not to.

Unusually all diners receive a do-it-yourself salad which was rather unexpected. You cut the tomato, cucumber, radishes and green leaves yourself and season them a you see fit with olive oil, bay leaf and some mild garam masala. It’s not going to set the world of salads a light, but it’s a refreshing way to start your meal. 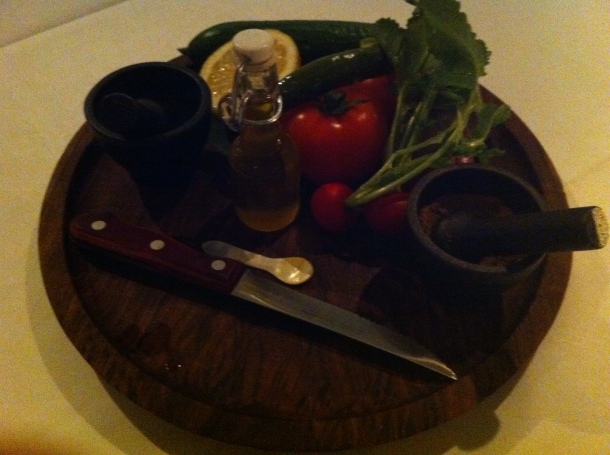 Yes, all the photos in this review will be this grainy and gloomy. Sorry.

I’ve forgotten the name of my lamb shank main, but it’s hard to forget the taste of this well-cooked dish. The tender, succulent meat almost falls off the bone and has a mild, delicately spiced taste that goes especially well with a buttered naan bread which was fluffy and not too chewy. It’s not a complex dish, but it’s a winner all the same. 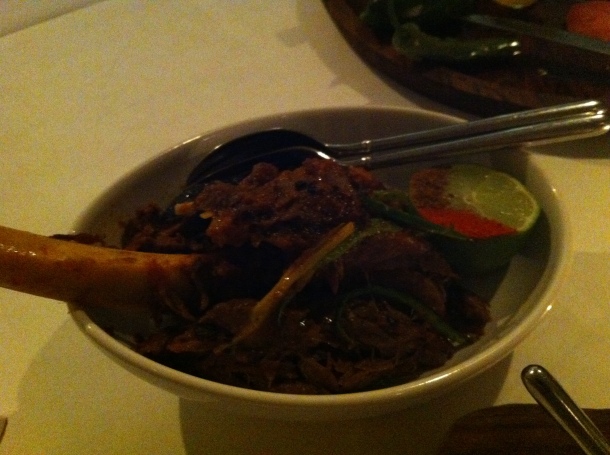 Spring seems like a good time for a nice shank of lamb. 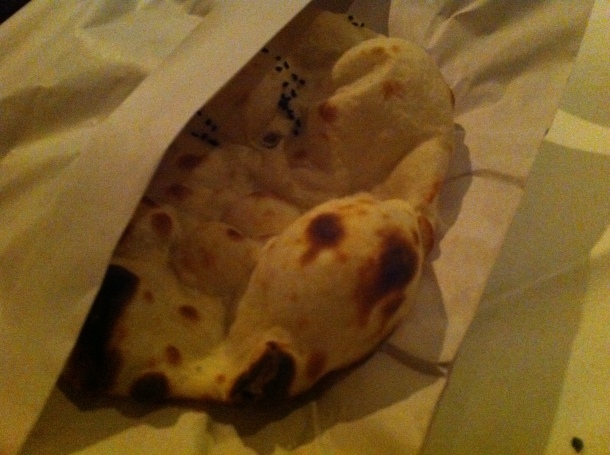 There are few things better in this world than warm bread.

The accompaniment of Baigan Ka Bhurta, a smoked pureed aubergine dish, wasn’t quite as successful. It too had a complex, layered mildly spicy flavour that was very pleasing. Nonetheless, it pales into comparison to the Lebanese and Turkish smoked aubergine dishes I’ve had which have a much more intense smoky flavour. It was good, but I probably wouldn’t order it again next time.

And to think I used to dislike aubergine.

A special note has to be made about the hot, damp towel used to refresh one self. It’s familiar to anyone who’s ever been to an Indian restaurant. Here, Mumbles poured some water over what looked like a candle stick holder, which prompted the damp towel to slowly rise up from the centre hole. It may be superfluous, but it’s still cool.

Probably the only time you’ll see a photo of a wet towel on this blog. Unless Wicket decides to strike a pose.

Moti Mahal has a huge selection of wine and spirits, but it also has some interesting sounding lassis, such as the masala honey and banana flavoured one. While the banana taste was quite distinct, any honey flavour was muted to the point of invisibility. Still slurp worthy, but disappointing nonetheless. 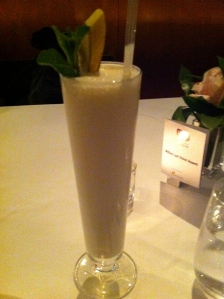 I seem to be slurping a lot of yogurt-based drinks lately.

While the lamb shank was very good, the highlight of the meal had to be the dessert. Shahi tukra was a surprisingly delicious, complex, rich and layered bread pudding doused in saffron-tinted milk that was somewhat reminscient of tre leche cake. It was paired with an ice cream that had the very distinctive taste of fennel, cardamom and a nutty element such as pistachio, almond or possibly both. The spiced ice cream provided a nice counter balance to the creamy bread. The silver leaf decoration was a pretty, if unnecessary touch. 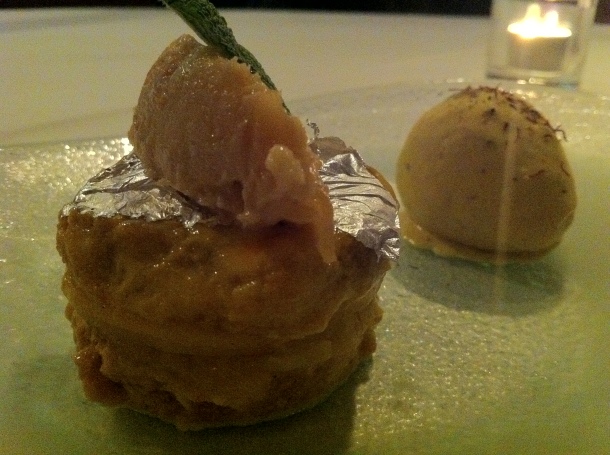 Objects in the photo may appear to be bigger than they are in real life.

Although my meal at Moti Mahal might seem a little truncated, it’s actually very filling which is just as well since it isn’t cheap in any sense of the word at £55 a head. This might seem like an especially high price to pay given the rather conservative cooking, but it was so well done I think it’s a price worth paying, if only once.

Total cost for one person including soft drink: £55 approx.