I’ve detailed my ongoing quest to find a filling, yet gastronomically interesting and inventive breakfast in previous reviews. The latest breakfast place to come to my attention is the Dean Street Townhouse. The Townhouse is actually a small, boutique (i.e. expensive) hotel that also has a bar and dining room that serves all three meals of the day, including breakfast. I usually have a low opinion of hotel breakfasts, especially those at the multinational chain hotels, which tend to be overpriced and about as interesting as the average programme on ITV4. The Townhouse’s menu was intriguing enough for me to round up The Breakfast Club to try it out.

The most important part of any breakfast is the liquid caffeine. Both the Lensman and the Flame Haired Squelchie went for a couple of cups of Americano, while I ordered a latte. We were all in general agreement that while it certainly perks you up, if rather gradually, the Townhouse’s coffee isn’t very distinctive when it comes to either taste or aroma. Sadly, The Jolly Giant, the Forth  Breakfast Club member was sadly absent due to Spawnmother duties, but he usually avoids caffeine anyway.

Flat White has nothing to worry about here.

The dish that piqued my interest in the Dean Street Townhouse in the first place was the ham hock and potato hash with fried duck egg. A spoilsport culinary reductionist like Wicket might point out that such a dish is merely a jumped-up fry up, but a well-made hash has a distinctive texture and taste all its own. 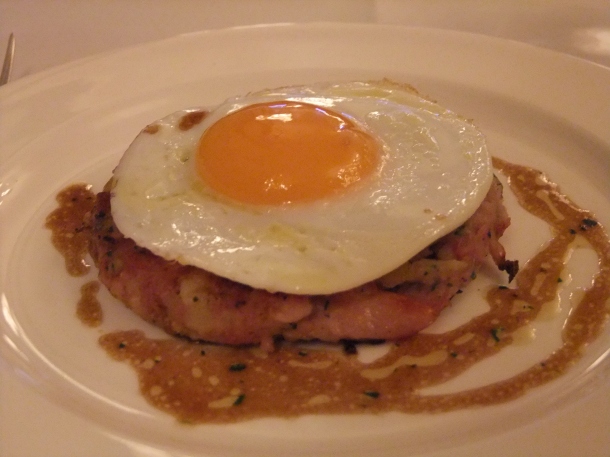 While the hash was certainly filling, it tasted rather plain and unmemorable. It lacked the salty goodness and coarseness of the delectable Bavarian ham hock the Lensman and I sampled in a Bavarian beer cellar in Augsburg, Germany. I couldn’t detect much difference between the chicken eggs we’re all familiar with and the duck egg served on top of the hash, apart from a slightly heavier taste to the yolk. The Flame Haired Squelchie pointed out that duck egg yolks are usually bigger than chicken egg yolks, which may appeal to you if you like your yolks all big and quivering. 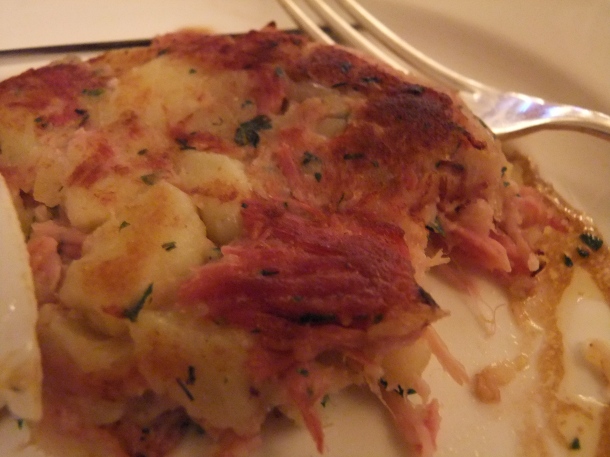 The Lensman has been on his own quest to find the perfect American-style pancakes in London – big and fluffy drizzled with sweet, tangy maple syrup and lots of crisp, fatty Yankee-style streaky bacon rashers. Although the Lensman was generally pleased by the Townhouse’s version, the pancakes weren’t quite as fluffy and rich as he was hoping for. Not a bad effort though (sorry, no photo).

Being a vegetarian, the Squelchie opted for mushrooms on toast. Big, hearty, not too greasy, slightly nutty portobello-esque mushrooms on crisp toast. You’d have to be monumentally incompetent to screw that up and thankfully the Townhouse didn’t. Bit rich for the blood at £7 though – almost as pricy as the meat-heavy dishes the Lensman and I went for.

The Flame Haired Squelchie hacks away at her mushrooms on toast.

Since the Jolly Giant wasn’t able to join us, I decided to continue my gluttonous assault on decency by ordering a second breakfast in his honour – a Yorkshire rhubarb compote with Greek yogurt. It would be rude not to after all. 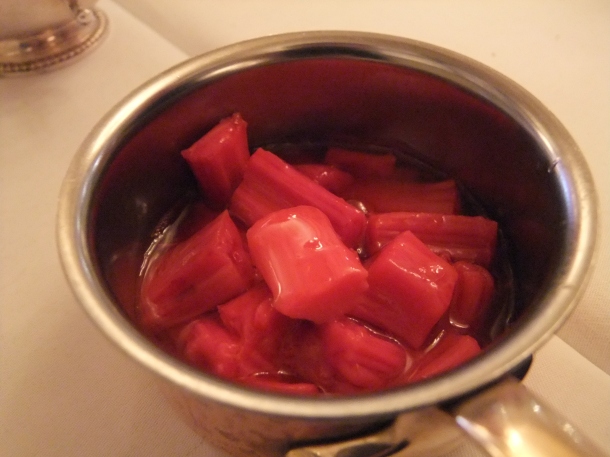 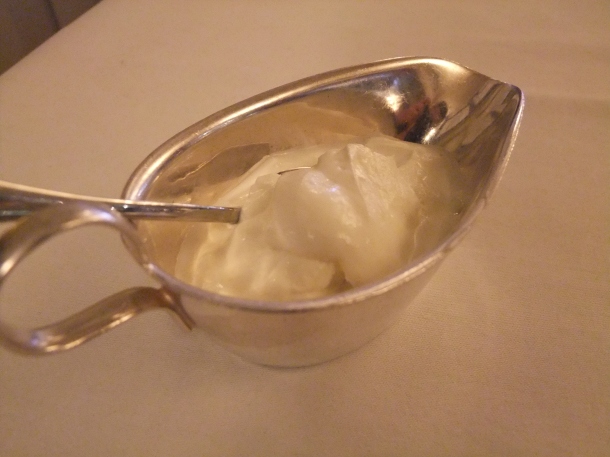 If the ham hock hash and fried duck egg was a bit underwhelming, then the rhubarb compote was a very pleasant surprise. As well as being nice to look at, the rhubarb had just the right balance of tartness and sweetness – if all rhubarb tasted like this then I’d eat it far more often. It was complimented well by the creamy yogurt. Although I usually prefer my Greek yogurt to be a bit more tart, the slightly more muted yogurt here was welcome given the already tart rhubarb.

Although the Squelchie wasn’t quite as ravenous as I was, she did indulge in a mango, coconut and pineapple smoothie. I had a quick sip myself and the flavours were surprisingly muted – the mango was almost entirely absent. At least it wasn’t cloyingly thick.

Since we visited the Dean Street Townhouse at the obscenely early hour of 08.30, we all greatly appreciated the subdued lighting which was very easy on the eyes. The decor was pleasing too – it had a vaguely interwar clubhouse feel to it, but with none of the stuffiness one might expect. The staff was generally polite and efficient.

Breakfast at the Dean Street Townhouse is a little hard to judge. If everything had been as tasty as the rhubarb compote and Greek yogurt or the pancakes, then the Townhouse would get at least a solid four star rating. The coffee and the ham hock hash were underwhelming though, while the mushrooms on toast and the smoothie were startlingly overpriced for what they were. Not a bad effort overall, but the Townhouse will have to try harder to make me come back again. Three stars – my breakfast quest continues.

Reservations: probably not necessary for breakfast.

Total cost for one person including coffee: £10-15 approx.