I’m usually very suspicious of chain restaurants. They either serve up bland, uninteresting food or they’re just plain bad. An exception to this rule of awfulness is Byron, a growing chain of burger restaurants all scattered throughout London. Charlie Brooker at The Guardian has his own inimitable take on burgers and chain restaurants. I’ve been to the one on Islington’s Upper Street a couple of occasions, but it’s the Soho branch on Wardour Street that I’m most familiar with.

Although set in the building of a former pub, the exposed brickwork and the projector showing odd clips of Bettie Page gives the Wardour Street branch a forced faux-Bohemian feel wholly suited to the nauseatingly trendy twentysomething media types that tend to make up most of the clientele. At weekend lunchtimes the crowd shifts to sickeningly handsome-looking families and couples, often snacking on salads (Salads? In a burger restaurant!?).

The service is unfailingly helpful. On one of my most recent visits the waitress offered to seat me close to the door, which I would have been fine with despite the brisk February chill drifting in everytime the door opened and closed. Another staff member immediately offered me a warmer table with a closer view of the exposed kitchen – observant staff who are keen to please is always a good sign.

The south London pop-up Meateasy is due to close soon, but I’m not too sad as Byron does a particularly good burger. Firm, succulent, coarsely ground meat cooked medium rare. Not a hint of grease or the grains of rusk that seem to infect lesser chain burgers. The vegetables were a little refrigerated and the bun was rather uninteresting, but it was toasted just right – crisp enough to not buckle under the weight of the pattie and any condiments you wish to slather it with, but not so much that it actually becomes toast. 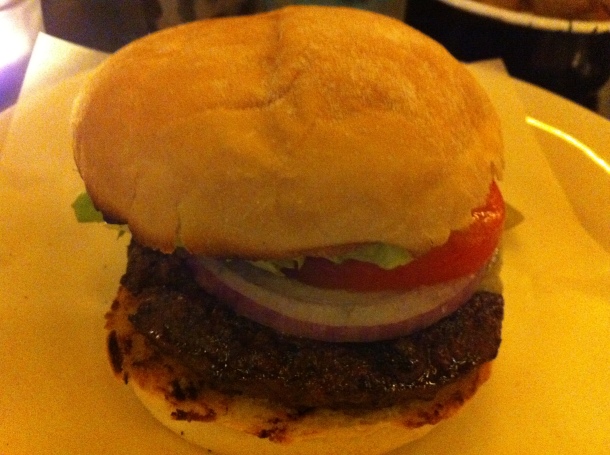 That is one tasty burger. Sorry, but someone had to say it and it might as well be me.

It’s worth sticking to the plain ol’ burger though, rather than one of the other varieties, such as a cheeseburger (although the double pattie plain burger is probably a safe bet if you loosen your belt first). The ‘blue cheese’ lacks the stinky, mouldy charm of a stilton or roquefort. The Gruyère here doesn’t deserve the name. Like its French counterpart Comté, Gruyère should have a layered taste full of divine nuttiness with a touch of saltiness. Not the rather bland version here though, which is a shame since I’d love to have a good Gruyère burger.

One of the disappointments at Meateasy were the excessively oily onion rings. Byron’s onion rings are the best I’ve had and I order them every time – I still have no idea what Byron’s chips taste like. The peppery batter is initially crispy but gently gives way to a pleasingly fluffy underlayer covering the whole sliced ring of onion – no reconstituted mush here. Plus, it’s unremarkably un-oily for a deep fried side dish. Excellent.

The best onion rings I’ve had yet.

Even for an unrepentant glutton such as myself, ordering dessert seems like one step too far after the rather filling burger and onion rings, but my sweet tooth must be satiated nonetheless. A good compromise are the malt milkshakes which are almost like desserts themselves. Thick, cold and satisfyingly filling for a drink. The chocolate milkshake is too sickly sweet for my taste though – I wonder if anyone’s ever attempted a dark, bitter or bittersweet chocolate milkshake?

Close up of the malt chocolate milkshake.

Although not perfect, Byron is proof that a chain restaurant doesn’t have to serve substandard rubbish. I can only hope that Byron’s standards don’t slip as it opens more and more branches. Four stars.

Name: Byron at The Intrepid Fox

Reservations: probably not necessary – diners don’t tend to linger for too long as this isn’t a lingering kind of place.

Total cost for one person including soft drink: £15 approx.