The tapas competition in Fitzrovia is fierce, so Fino has its work cut out.

I’ve slowly been working my way through the unusual concentration of tapas restaurants in Fitzrovia. I loved The Salt Yard and had mixed feelings about Barrica, so dining at the long-established Fino will be nothing if not interesting. Fino is known for its slow-roasted meats, such as lamb and whole suckling pigs, but these require at least 48 hours notice and my visit was a last minute business lunch so I didn’t have the opportunity to try them this time around.

Despite the allure of whole suckling pigs, Fino’s menu, which changes frequently, isn’t wholly dominated by red meat with more than a few seafood options too. The king prawns are a touch pricy at £6 each, but they are large, plump, juicy and startlingly fresh. 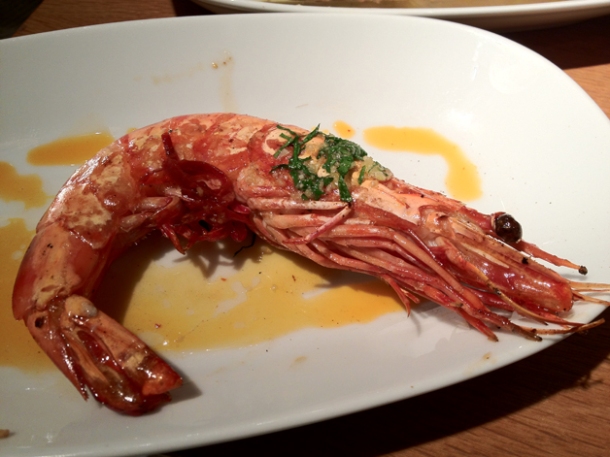 Prawn. Not the District 9 variety thankfully.

Fino is owned by the Hart brothers, restauranteurs who also own Quo Vadis and Barrafina. One dish that seems to pop up at all three of them on a regular basis are razor clams and it’s not hard to see why. The plump and firm mollusc meat is succulent with a clean aftertaste. 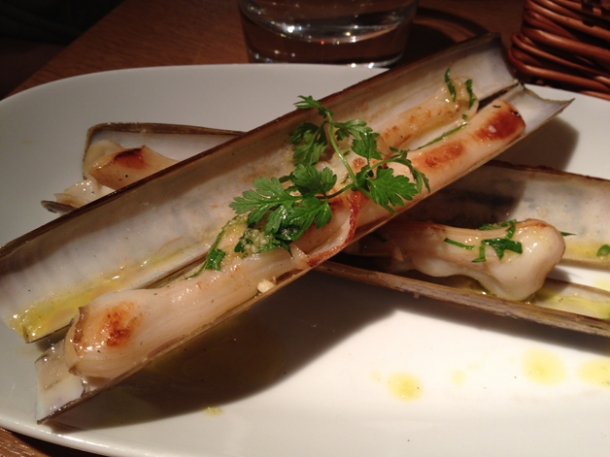 You'd better have a good excuse for not liking razor clams.

John Dory is a fish not often seen on London restaurant menus so it’s worth trying for that reason alone. The very crispy exterior gives way to reveal flaky white flesh that’s quite bony. It also has a citrusy taste to it and goes surprisingly well with the accompanying baby beetroot salad. The slices of beetroot here have been pickled, resulting in a salmon-like colour, and have a gentle, carrot-like sweetness to it with only an underlying hint of the usually overwhelmingly sharp beetroot flavour. 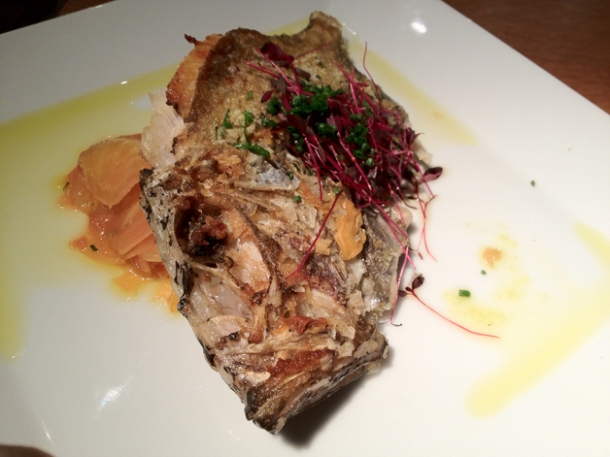 Why is it called John Dory anyway?

Fried soft shell crab isn’t a dish I’d normally associate with tapas, but Fino’s version is tasty nonetheless. The crisp batter covers the soft and creamy crab legs, but the portion is small, even for tapas. 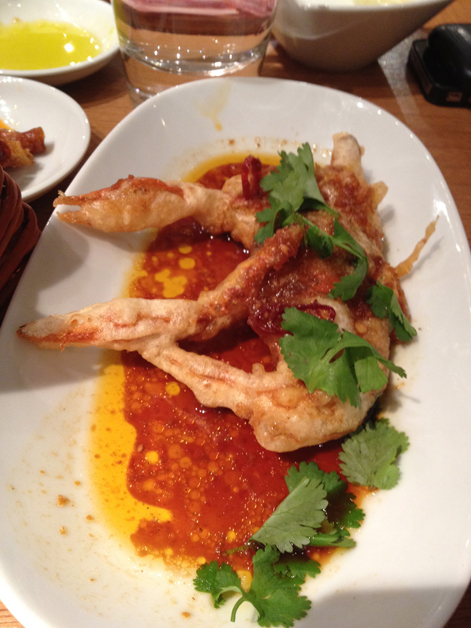 The vegetable options were a bit thin on the ground, leaving little for the lone vegetarian at my business lunch to choose from. The fries were unremarkable, but the fennel, radish and cherry tomato salad was a bit more interesting. The firm slices of fennel and radish were refreshing if a little bland. The sliced cherry tomato halves had an oddly marbled appearance, but this didn’t change their flavour in any way. 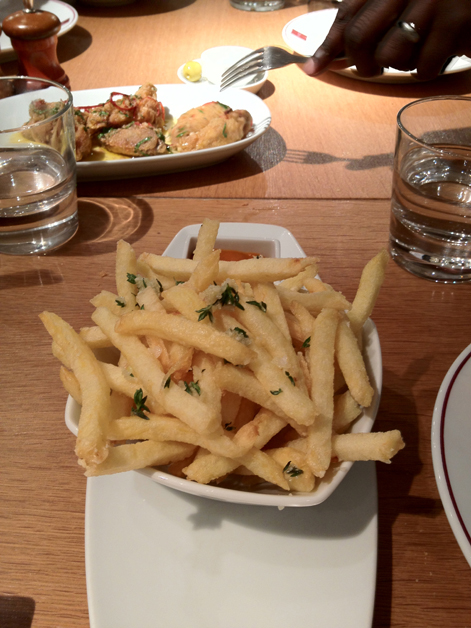 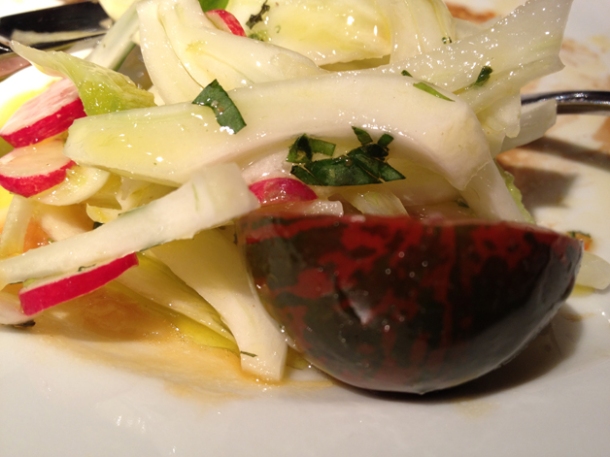 Yes, that weird looking thing is a cherry tomato.

Tortilla is a tapas staple, but its execution can be surprisingly variable. Fino’s version was soft with fairly large, discernible chunks of potato, but was also a bit bland and stodgy. I much prefer the silkier, creamier version at The Salt Yard. 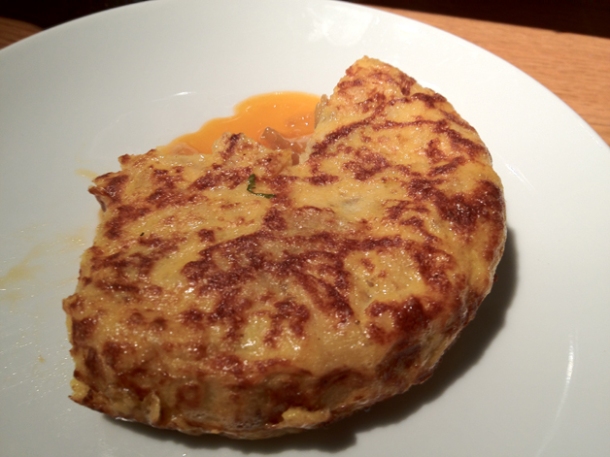 This 'classic' tortilla is nothing of the sort.

My attempt at having a meat-free lunch was foiled by one of the other diners at my table, but one of their selections wasn’t very inspired and in one case was down-right odd. The rump of lamb was juicy and well-cooked, but rather anonymous and lacked distinctiveness – in a blind taste test I would’ve been severely pushed to tell it apart from the lamb served at any number of other London restaurants. 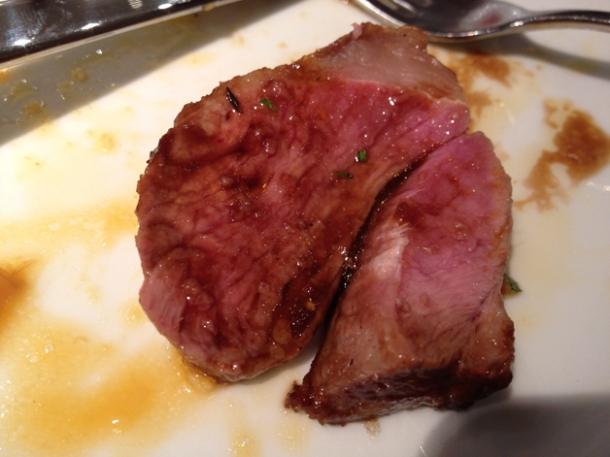 a slice of rump of lamb at Fino

I didn’t expect to find deep fried chicken wings on the menu of a tapas restaurant and was at first unimpressed with the stodgy, deep-fried batter. The marinade of garlic, lemon and chillis made it bearable – although it wasn’t spicy in the slightest, the zestiness made up for it to a certain extent. 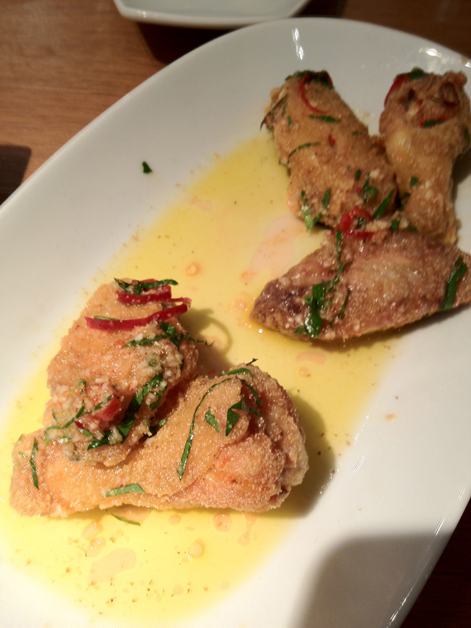 The jamon ham was a bit too oily, but the nutty, slightly smoky flavour was delightfully moreish. It’s not quite as distinctively memorable as some of the jamons available at The Salt Yard and The Opera Tavern, but it’s not far off either. 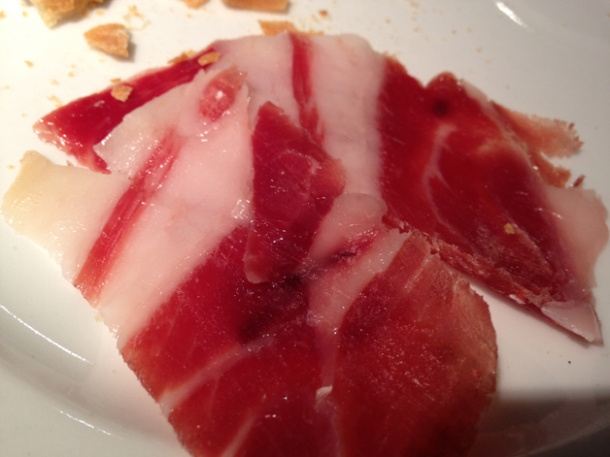 Service was friendly and efficient, although the underground dining space has a corporate, anonymous airport lounge feel to it. Given some of the more stylish and eye-catching restaurant interiors found throughout London, a revamp wouldn’t go amiss.

I suspect my verdict would’ve been somewhat different if I had preordered one of the whole, slow-roasted animals. As it is, the seafood at Fino is superb with the other dishes merely average at best. The menu as a whole also lacks some of the imaginative distinctiveness found at The Salt Yard which remains my favourite Fitzrovia tapas restaurant. Although Fino gets just three stars out of five based on this visit, I will be back with my sights firmly set on some slow-roasted meats.

Total cost for one person including mineral water shared between five people: £25-30 approx.

One thought on “Fino review – tapas legend or tapas has-been?”