Disclosure: The Picky Glutton was invited to review this restaurant and the second meal in this review was partially prepaid for by the restaurant in the form of an unsolicited £60 voucher. I paid for the first meal myself.

Asia is a small word for a massive continent that technically stretches all the way from Turkey to Japan. Banana Tree is a small chain of restaurants that concentrates on food from the Indochina region, namely Vietnam, Laos, Cambodia, Thailand, Malaysia and Burma. This vast culinary tract means the menu is quite large too, so I visited the new Wardour Street branch of Banana Tree on two separate occasions to get a sense of it all.

The Wardour Street branch of Banana Tree is located on a busy Soho drag that has no shortage of competing chain restaurants, such as Wahaca, Byron at The Intrepid Fox and Busaba Eathai. It’s therefore no surprise that Banana Tree has a pile ’em high and shift ’em quick feel to it. The tables are very tightly packed together (stretch your arms and you risk smacking someone in the head) and the quick and efficient service felt like a well-oiled machine despite the newness of the branch. The industrial decor is nothing to write home about with the usual metal ducts and exposed brick walls.

I was accompanied on my first visit to Banana Tree by The Euro Hedgie who immediately had doubts about the large, unfocussed menu but I was willing to give the place a chance. I started off with the kau chi dumplings allegedly filled with pork and prawns. I say allegedly since it was hard to tell what the cheap, bland, bitty papier-mâché-textured filling actually consisted off. The thin, cheap, dry, flavourless won ton-style dumpling skins didn’t impress either. I don’t know what puréed newspaper tastes like, but I imagine they’d taste a lot like the kau chi dumplings.

The Euro Hedgie’s starter wasn’t as disastrously bad, but it wasn’t that great either. The chicken satay skewers had a slightly crisp, caramelised exterior, but this couldn’t disguise the dry chunks of rather bland meat. We weren’t quite sure which part of the chicken they had been ripped from either, although the sweet, inoffensively-spiced peanut sauce wasn’t too bad and actually had some discernible chunks of crushed peanut in it. The skewers are served with glutinous balls of rice sliced into chunks and oddly served cold. This may have helped the sticky grains of rice clump together, but it also made them unappetising.

The prices at Banana Tree are very reasonable with all mains under £15 and most under £10. Nevertheless if you want to get as much value as possible, there’s the combo deal which allows you pair a curry, stew or ‘regional speciality’ main course with a sesame glass noodle salad, sweet corn cakes, crackers and steamed jasmine rice for just £3.25 extra. The Euro Hedgie did just this with the braised pork belly in green coconut juice.

However, the Hedgie was gravely disappointed with the quality of the pork belly. The meat had lost most of its texture, having been reduced to an excessively soft sinewy stew. The fat hadn’t melted and liquefied properly, taking on a squidgy jelly-like texture instead that clumped together forming a solid layer on top of the meat rather than oozing into it. Poor.

The glass noodle salad wasn’t too bad, but there wasn’t enough dressing or glass noodles and far too much salad. The crackers weren’t anything to write home about, while the sweet corn cakes tasted more like an incredibly dry supermarket-quality onion bhaji but with none of the greasy charm. The £3.25 combo deal is cheap, but it’s composed mostly of substandard filler.

Don't be such a pig.

My main course of spicy tamarind aubergine wasn’t spicy in the slightest, nor did it taste much of tamarind. The slices of aubergine had lost much of their buttery flavour and had a very soft, jelly-like texture which wasn’t to my liking. Although the reddish sauce wasn’t very spicy and tasted little of tamarind, it did have a strong, savoury bean flavour that goes nicely on top of some steamed rice and brought back some happy childhood memories. Otherwise, disappointing.

Apparently one can be allergic to aubergine.

It would be an understatement to say that my first visit to Banana Tree was very disappointing, but I took the opportunity to try the place again, this time with the help of Wicket and Snoop Dogg. Service was just as quick and efficient as it was before, but since this second visit took place on an evening early in the week, it wasn’t nearly as crowded as it was on the Friday evening of my visit with the Euro Hedgie. You could ever hear yourself think or have a conversation without using a hearing aid. The staff need to move the phone when it gets really busy though – otherwise trying to check opening times with the staff over the phone is nigh on impossible on a loud, busy evening.

The exposed brick wall and handful of communal benches are just out of frame.

I started off with the euphemistically named chicken stuffed money bags, which turned out to be very odd. Inside the thick, deep fried dough wrappers was a surprisingly bitty, finely ground filling. It tasted more like a particularly bland version of falafel than chicken, although the sweet chilli sauce livens it up a little. Not a fan. 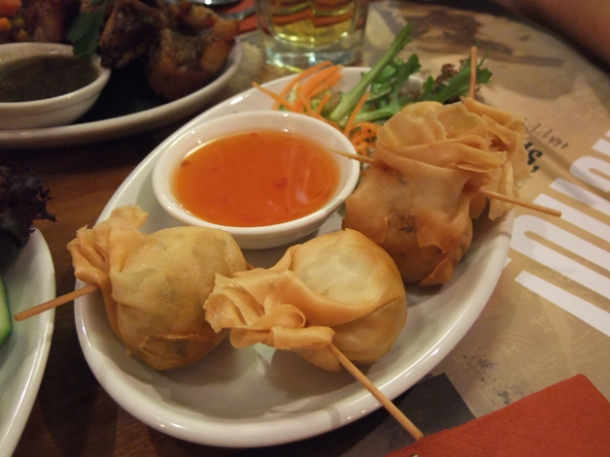 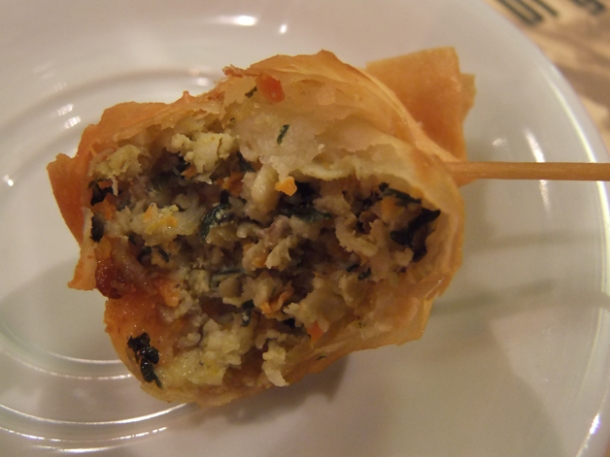 Wicket was intrigued by the crispy soya filo rolls filled with yam, prawns and ‘meat’, but we both found the overall effect far more mundane. The bland, if admittedly rather crispy (but not flaky) exterior was followed by a tasteless, cardboard-like filling. A double shot of blandness. 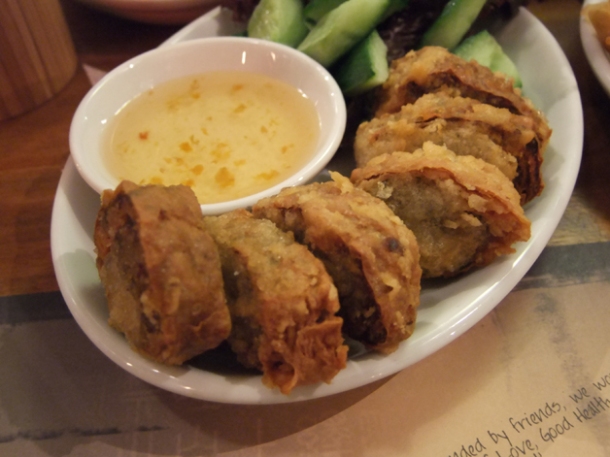 Soya and filo? What madness is this?

Snoop Dogg wanted something to chew on, so he ordered the grilled pork bakkwa jerky. Despite some extensive chewing, neither of us liked it much. The dry, gristly, fatty chunks of blackened pork were a little too dry and gristly, lacking in flavour. Even the especially fatty bits were underwhelming.

Stop jerking me around.

Calling anything ‘legendary’ is bound to raise expectations that can’t be met. The ‘Legendary Rendang’ curry wasn’t quite that superlative, but it was surprisingly moreish. It wasn’t very spicy and the tender beef was a bit too stew like, but it did have the distinct taste of coconut which was very pleasing.

Rendang special combo. It's not a Street Fighter move, but a dish.

I chose to accompany the rendang with the combo deal which was surprisingly better than the combo deal The Euro Hedgie had the first time around. The glass noodle salad and the crackers were still nothing to write home about, but the sweet corn cakes actually tasted of corn this time around with a moist, coarse texture rather than the dry supermarket onion bhaji-effect that offended the Hedgie.

Both Snoop Dogg and I were pleasantly surprised by the flavour of his Thai roast duck curry. The thin sauce had the very distinct flavour of fish sauce and lime which made it surprisingly tart and refreshing for a curry. Wicket found it too odd for his conservative taste buds which is to be expected for someone who grew up on a diet of jawas and stormtroopers. We all agreed that the actual duck itself was fairly foul – the bland, chewy meat could have been any random piece of poultry.

Like Duck Soup, this duck curry is a bit funny.

Although Snoop Dogg seemed to like his accompaniment of noodles with bean sprouts in dark soy sauce, I found the bland chop suey-style wheat noodles to be utterly boring and a touch too greasy as well.

Before plumping for the rendang, I had been severely tempted by the char grilled blackened chilli pork, but Wicket beat me to it. The pork wasn’t worth fighting over though. Although sweet, it was lacking in depth and character despite its marinade of soy sauce, chilli, garlic and other spices. It was also quite dry with a chewy texture, which would have made for a pleasant rumination if the flavour had been multilayered. As it was, it was just a chore chewing through all that dry, monotonous meat. 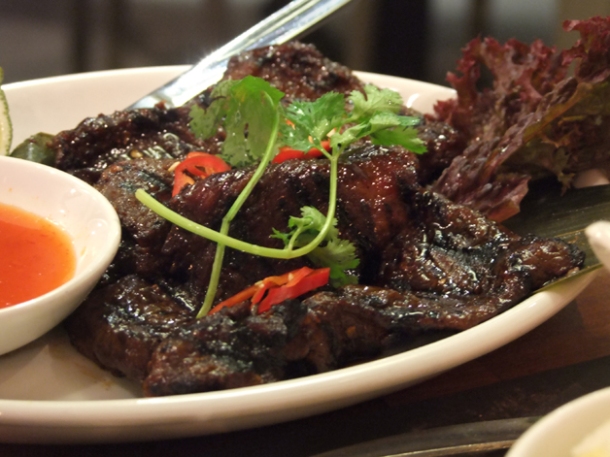 These chewy strips of pork will need cutting up if you're sharing them with the whole table. Why didn't the kitchen think of that?

Wicket almost single handedly concocted an antidote to all the meat the three of us were eating by cannily ordering vegetables in the form of a green papaya salad and stir fried pak choi. The latter was fine (stir fried pak choi is pretty hard to screw up after all), but the papaya salad was a mixed bag. Although crisp and firm thanks to the shavings of unripe papaya, it didn’t taste of much and wasn’t especially refreshing either.

Green papaya salad. So called because it uses unripened papaya.

Although my fellow bloggers seem fond of the place, my conclusion after having eaten my way through a fair chunk of the menu at Banana Tree is that the food is, at best, merely OK. However, you have to pick your way very carefully through the menu to avoid being hit with some disappointingly bland, monotonous or just plain poor dishes. Banana Tree is best seen as an inexpensive way of lining your stomach before a night out, but only if you can’t get into any of its neighbouring competitors and you don’t want to put up with the brusque service of Chinatown. It’s not all bad, but the quality of the dishes is just too scattershot for a three star rating, so a lowly two stars it is. They can do better and so can you.

Reservations: recommended, especially on or near weekends.

Total cost for one person including drinks: £25 approx.