Stop me if you’ve heard this one before. A street food stall serves up a cuisine barely known to most Londoners, earning plaudits and a devoted following in the process. Following a series of pop-ups, residencies and barn-storming media appearances, it finally finds a permanent home in trendy east London, albeit on a quiet, out-of-the-way street. There, it plies its trade as one of London’s newest restaurants, hoping to thrive against the odds.

It’s a story that’s very 2016, the biography of so many London restaurants that have come and gone over the past few years. It’s also the origin story of the quixotically named Bong Bong’s Manila Kanteen. Unrelated to either the Bang Bang Oriental Foodhall or Bunga Bunga, this Filipino restaurant started out life as street food traders BBQ Dreamz before finding its premises in Bethnal Green near Cambridge Heath Overground station. 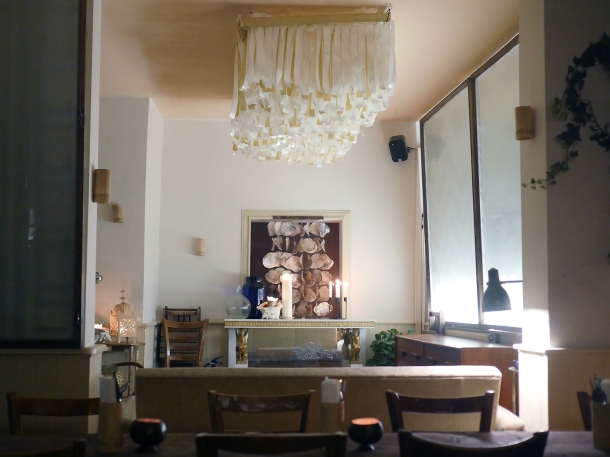 No, I don’t know what those hanging ornaments are either. Cat toys, perhaps?

It’s a very functional location far from much passing trade. But despite this and its name, Bong Bong’s isn’t a no-frills greasy spoon. The lighting is moodily dim to the point that you need to use your phone’s torch to read the short menu. The bar area leads into a plush living room with its own sofa, although it can also be reconfigured to host a banqueting table.

The short menu doesn’t attempt to recreate the entire culinary pantheon of the Philippines, but focusses on a handful of meaty favourites alongside a few seafood and vegetable dishes. The results can be an electrifying introduction to Filipino food.

The decor of the bar area manages to evoke the tropics without resorting to the hoary old tiki bar cliches.

Bong Bong’s noodle salad was reminiscent of Vietnamese bun. Light, thin and supple vermicelli-style rice noodles came dressed with chilli, parsley, a dusting of crushed nuts and a tart brine. The best element here had to be the pickled green papaya, its tartness and bell pepper-style crispness proving to be the perfect encapsulation of this starter’s qualities – flavoursome yet refreshing.

The coconut creamed mix of spinach and kale was moreishly bittersweet, with Crispy Rendang and I fighting over every mouthful. 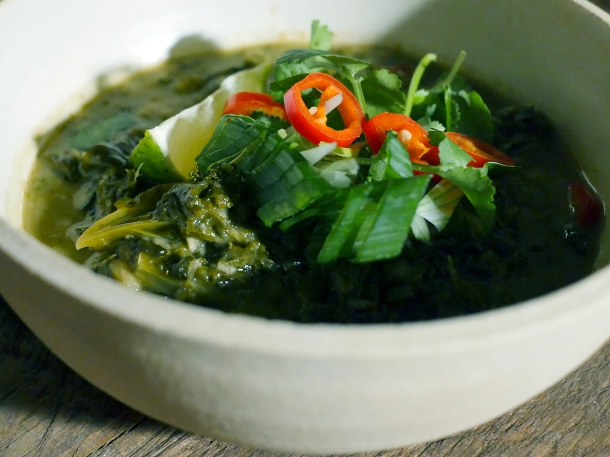 Moist, chunky chicken wings came slicked with a glaze of uncommon beauty. Brimming with citrusy flavours, both sweet and acidic in perfect balance. Subtle yet somehow distinctively bold at the same time, it was electrifyingly addictive. Sadly, the wings weren’t quite as nuanced and bold on a subsequent visit with Crispy Rendang. While still moreish, the citrusy flavours were far less pronounced. The vegetarian-friendly version which replaces the chicken wings with cauliflower was underwhelming, with the florets proving to be poor conveyors for the glaze’s qualities. The cauliflower was, admittedly, firm and not at all overcooked.

Prawns served in a coconut, lemongrass and ginger sauce resembled a faint Thai curry, with the crispness of the herb garnishes and the milkiness of the sauce proving to be the most memorable elements in an otherwise deeply unmemorable dish. 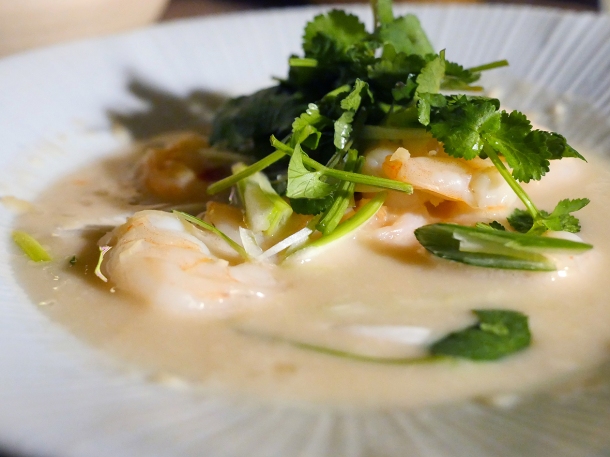 One of Bong Bong’s more interesting neighbours is a Bulgarian grocers.

Although the skewered duck hearts didn’t have the snappy firm texture of the very best grilled offal, they were nonetheless earthy and moist. Texture came instead of crisp little morsels of pork crackling. Although the dish wasn’t the yakitori-beating blockbuster I had hoped for, with the crackling-induced texture a clever if only partially effective feint, these little hearts still won me over.

A generous helping of fleshy aubergine, cubed into chunks, came in a curry-like sauce of unparalleled beauty. It was an entrancingly sophisticated thing with layers of earthiness followed by muskiness and a gentle sweetness. It was so beguilingly addictive, I was almost in mourning when I finished the last spoonful.

Although the slab of grilled mackerel didn’t have the distinctive taste that makes the fish so enjoyable, this fish dish was by no means a write-off. The mackerel was eminently scoffable thanks to a light and refreshing dressing of chilli, parsley, tomatoes, red onions and fennel with everything bound together by a citrusy brine.

This review’s procrastination was brought to you, in part, by Daft Punk.

It’s easy to become blasé and complacent about pork belly, taking its charms for granted. Then you encounter Bong Bong’s version and realise just how wondrous it can be. These delicately crisp, then crunchy and unctuously meaty porcine cubes sat somewhere in between a Cantonese-style crispy roast pork and Hispanophile chicharróns, but were far better than any version of either that I’ve had in this town.

Bong Bong’s cured bavette steak was a similarly wondrous carnivorous treat. The delicately pink medallions of rare beef had a moreishly tart and sour tang that shows there can be more to steak than just browning and fat. Although the green beans felt a bit intrusive, the radishes and coriander complimented the beef neatly with their sweet crispness and clean aftertaste. 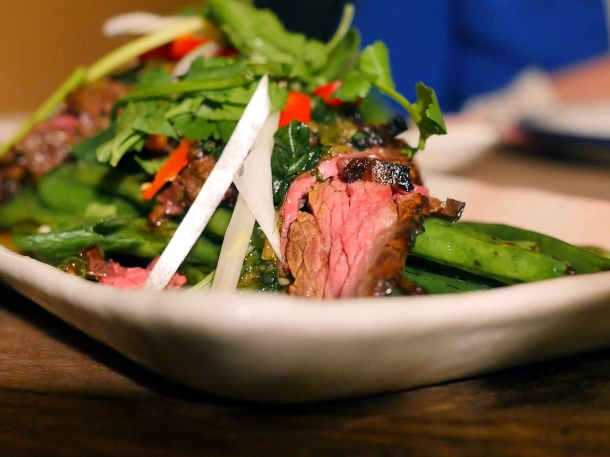 The lime sorbet was sullied by a veritable hail storm of chunky ice crystals. The sharp mulchy crunch and teeth-chattering cold were a shame as the flavour combination of tart sharpness and sugary sweetness was potently refreshing and satisfying. 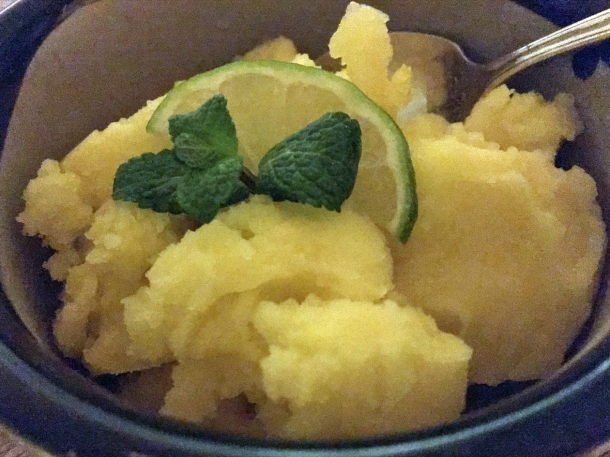 A crisp, crunchy and oil-free spring roll came filled with a banana and cinnamon combo that was unsurprisingly reminiscent of caramel and chocolate in its tangy sweetness. That made the cool, smooth and refreshing qualities of the ube purple yam ice cream all the more essential. With a starchy sweetness akin to sweet potato, it was a delight in its own right too and well worth having on its own if you don’t fancy the deep-fried delights of the sweet spring roll. 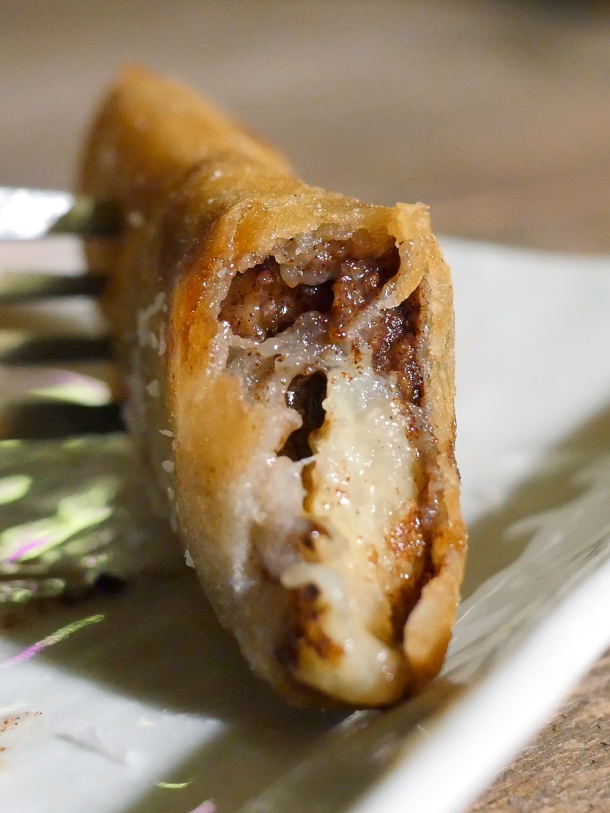 Can you get yam jam?

Bong Bong’s Manila Kanteen is far from the first Filipino restaurant in London, but it is one of the most high profile. Even so, its precarious location makes me worry – even on Thursday and Friday evenings, when other east London restaurants are often heaving from the get-go, business took a while to get going with empty tables going spare. This may explain why the proprietors have been so cautious in their opening hours, with dinner service restricted to Thursday, Friday and the weekends.

Although there were a few wobbles in Bong Bong’s cooking, this restaurant still demands and commands your attention. The multifaceted levels of glazing, marinading, brining and curing remind me of Little Duck The Picklery and the results can often be just as delicious. Bong Bong’s is a potential restaurant classic in the making, but that future is out of reach without your custom. Bong Bong’s deserves to succeed where so many other street food darlings have tried and failed. For now, all we can do is sing its praises and hope for the best.

Reservations? highly recommended on and around weekends.

Average cost for one person, including soft drinks, when shared between two: £30-35 approx.