Pubs serving Thai food seems like an odd pairing, but this now commonplace coupling was initially a result of nothing more exotic than economic necessity and entrepreneurial foresight. The first documented pub on these islands with a Thai kitchen was apparently Notting Hill’s Churchill Arms – a partnership between an Irish publican and a Thai chef. This makes the oddly name Mc and Sons seem all the more fitting. This Irish-themed pub in Southwark not only serves Thai food, it practically makes a song and dance about it with portraits of Thai monarchs adorning the walls alongside photos of Irish matriarchs.

Mc and Sons isn’t quite the quirky, plucky independent that it appears to be, though. It’s actually part of the Windmill Taverns Group, with two of its three sister pubs sharing the same ‘Johnny Rice’ branded Thai menu. Dishes full of umami and spicy heat at low prices makes sense for a pub – it helps stoke demand for more drink without sapping customers’ ability to pay for it. And, just as crucially, it keeps those customers without tottering distance of the bar.

As a teetotal non-drinker though, Mc and Sons’ Thai menu quickly lost its lustre and appeal.

Starters at Mc and Sons

The most Thai thing about the tofu salad was the cumulative heat of the fish sauce-based dressing, augmented by the sharpness of the red onions. The salad itself was an uninspired melange of cherry tomatoes, parsley, lettuce and limp, vaguely bread-like tofu. Sauce aside, this is the sort of salad that traumatises small children into a lifetime of unhealthy eating. 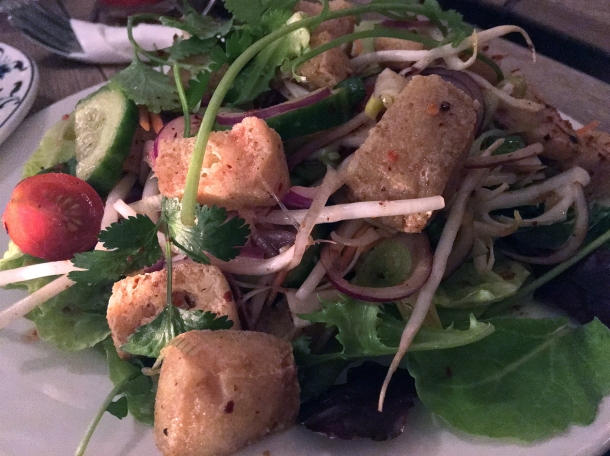 There has to be a reason why tofu tends to be so bad outside of East Asia.

Chips were surprisingly respectable. Thickly cut from whole potato – rather than consisting of bitty, airy and reconstituted mash – they were reasonably crisp and golden on the outside. The chip-shop style curry sauce was a bit too sweet for my liking though. 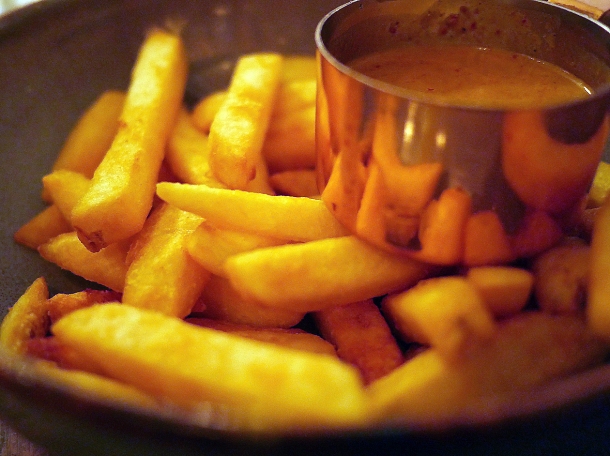 Of course the curry sauce came in a miniature saucepan.

Vegetarian spring rolls were almost entirely unremarkable, from the forgettable cabbage on the inside to the sweet chilli sauce on the side. Only the crunchy pastry stood out as it was remarkably oil-free. 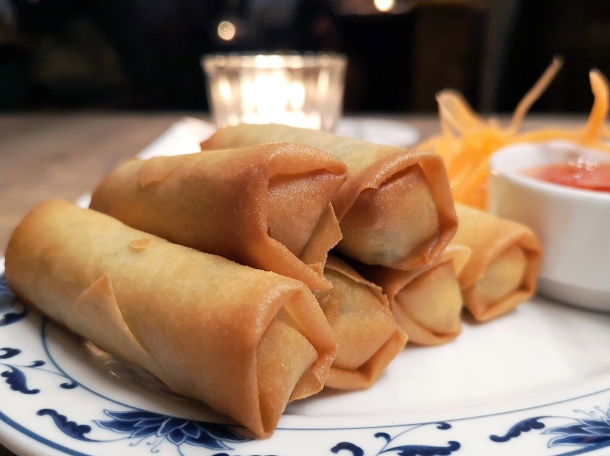 Corn fritters were a far better vegetarian starter as each chewy patty was lightly sweet and moreish. The only sour note was a repeat appearance of the sweet chilli sauce. As expected, it was more cloyingly sweet than chilli hot. Its saccharin ‘charms’ would be more at home on a plate of defrosted chicken nuggets in a motorway services station. 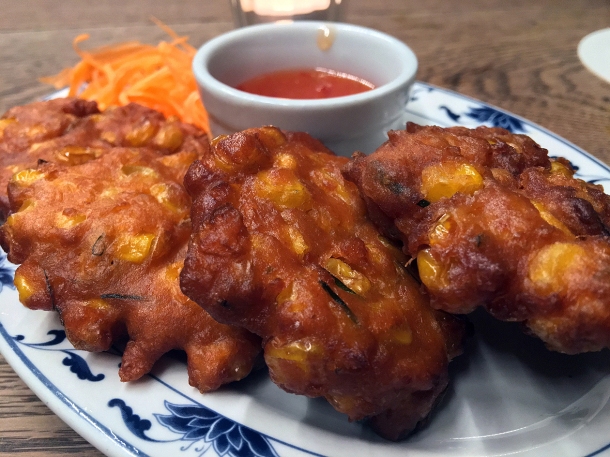 Noodle dishes at Mc and Sons

London has no shortage of terrible to mediocre versions of pad thai. While the version at Mc and Sons won’t win any awards, neither will it bring everlasting shame and ignominy on the kitchen. Thin, narrow rice noodles came with reasonably springy and fresh prawns. There wasn’t too much cheap filler veg and the whole thing had a respectable level of umami, although it wasn’t anywhere as deep and resonant as it could’ve been. The noodles were a tad too greasy, but not enough to spoil this heap of carbs. 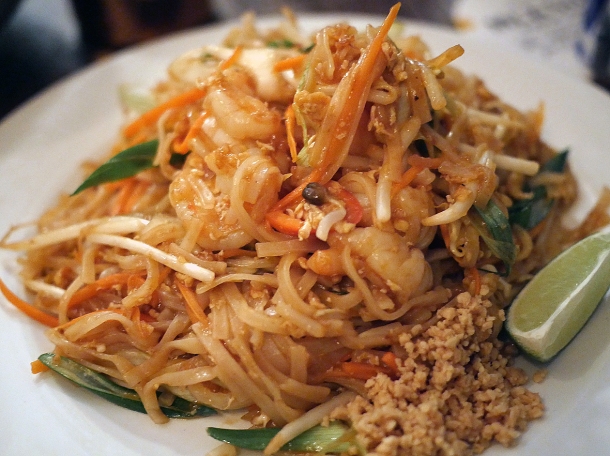 Apologies for the iffy photo folks. Some parts of this pub are darker than the corners of my imagination.

A touch of greasiness also afflicted the oyster sauce noodles, but the bigger problem here was the apparent absence of any discernible moreishness derived from the oyster sauce – if any had ever been present. Indeed, flavour as a whole was missing from this dish. It was necessary to practically flood the plate with both of the table sauces – a chilli oil and a chilli-laced fish sauce. At least there was nothing to complain about texturally. The moderately wide and thick rice noodles were supple and smooth, while the tofu was unexpectedly better than before with a squidgy maltiness. The selection of vegetables was unimaginative – carrots, baby corn, cabbage and broccoli – but at least none of it had been stir-fried into mushy oblivion. 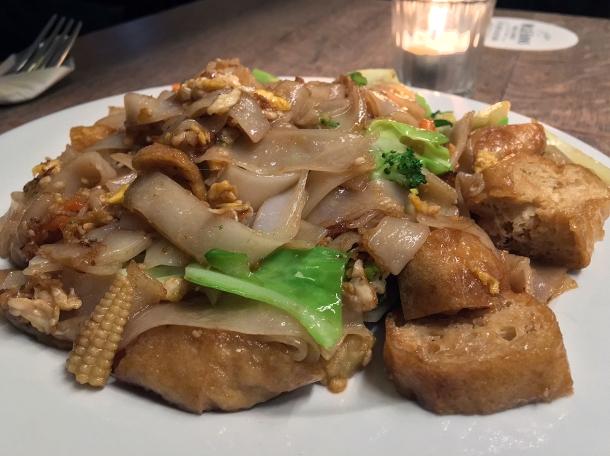 This review’s procrastination was brought to you, in part, by cat videos on YouTube.

Other dishes at Mc and Sons

The waddling quacker in the duck curry was commendable – earthy with a touch of fat and supple skin. It needed better sauce though as the crimson puddle was overwhelmed by the creaminess of coconut. 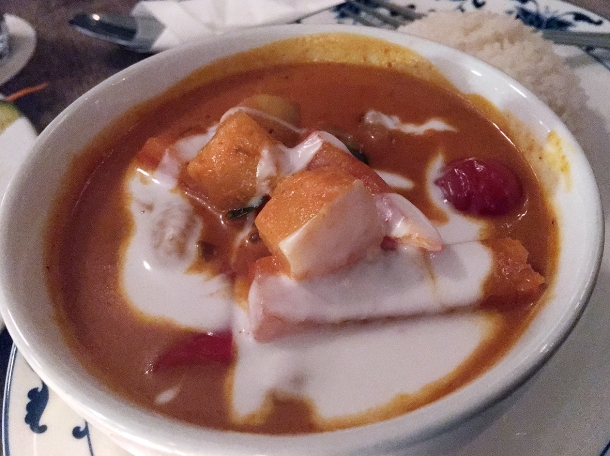 There was little sign of the promised basil or fish sauce in the pad gra praw and the thin medallions of beef had little to say for themselves. The thin sauce was laced with umami and a prickly spicy heat though, while the bittersweet veg shows the kitchen can up its vegetable game when it wants to. 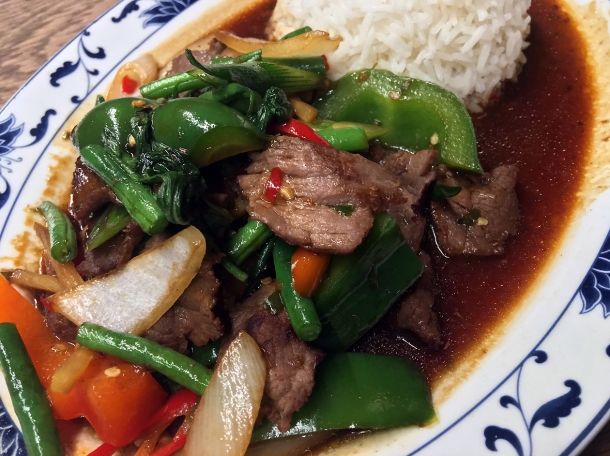 Banana fritters are the only dessert on the menu at the time of writing. The fruit was a surprisingly timid affair, but the batter encasing it was an airy, moderately crisp affair free of excess oil. It was let down not only by its banana bedmate, but also by the black sesame ice cream. While the latter was smooth, it had all the black sesame flavour as a glass of water. Still, the fruitiness seeping into the ice cream from the juicy slices of orange made up for this to an extent. It’s always a worrying sign when a kitchen struggles with something as basic as banana fritters and ice cream. 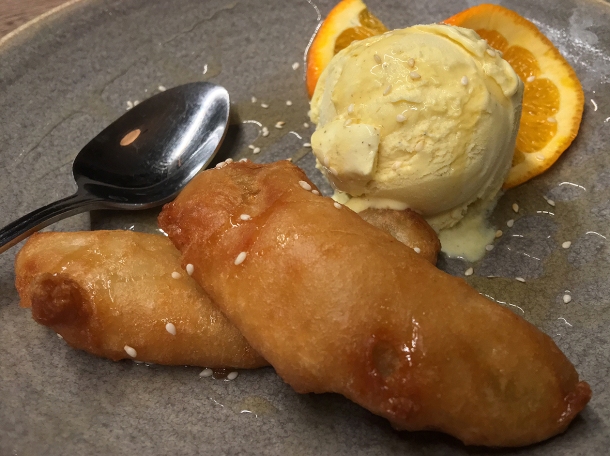 If you want thrilling, boldly flavoursome Thai food then don’t eat at Mc and Sons. Although, to be fair, that was never what this pub was about. It can squeeze out occasionally pleasing, if deeply unbalanced food at knock down prices. All that is more than sufficient to keep its tipsy clientele from leaving its booze-dispensing embrace to seek out hearty stomach lining somewhere else. The bigger problem is that the table service can be frustratingly amateurish. I don’t expect much in service from a pub, but something has gone deeply awry when it takes 15-30 minutes to place an order on multiple occasions when the pub is only half-full. Whether it’s a case of badly trained table staff or being deliberately ignored, that level of hospitality was enough to make me give up and leave hungry more than once. Perhaps the Southwark/Bankside/Borough/London Bridge area will get Thai food worthy of the name one day. But if it ever does, you won’t find it – or efficient service – at Mc and Sons.