Mexico City (or the DF in local slang) is hardly the most beautiful metropolis I’ve ever visited, but it does have its charms and quirks. Polanco, DF’s moneyed equivalent to Mayfair or Chelsea, has streets amusingly named after (mostly foreign) writers and intellectuals. It’s on Calle Schiller where you’ll find Kaah Siis, a fine dining restaurant that opens relatively early for dinner (by DF standards) at 19.00. Its attractive decor is broken up by small coat stands placed next to each table – a neat touch (especially welcome if you’ve ever had your coat lining torn by ham-fisted wobbly-heeled receptionist staff at another high-priced Mexican restaurant).

Although none of the staff spoke much English, that didn’t stop them from providing smooth and efficient service. Plus, if you opt for the tasting menu instead of a la carte then there’s little need for phrase book fumbling. It’s unlikely you’ll need to ask for bread, as the table’s bread basket was constantly refilled with the warm and fluffy brioche – a particular favourite. Served on the side was butter topped with Oaxacan spices, but the mildly peppery and nutty flavours they imparted onto the butter was fleeting. The bread was far better than the amuse bouche – a collection of sickly sweet onions in an oddly tart mushroom sauce.

Yes, you do get leavened bread in Mexico and not just tortillas. 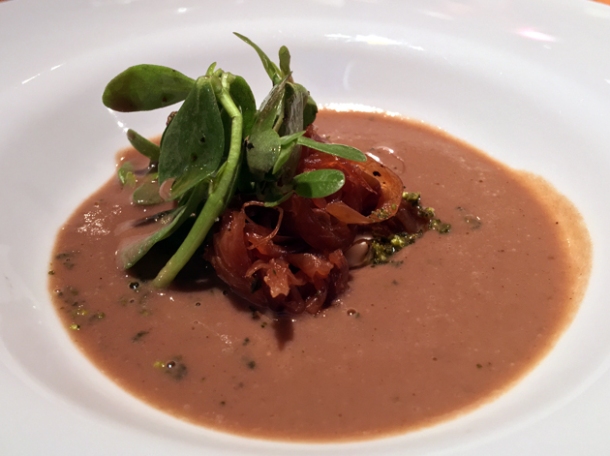 The odd tostada set the template for much of what followed. The crunchy fried tortilla was nutty, but also far too stodgy. Salty, ginger-flecked prawn loaf clashed with a sauce that was both fruity and umami. As if the saltiness of the prawns wasn’t enough, leaves and petals dusted with salty white cheese crumbs pursed my lips even further. Weird and amateurish.

The smooth, almost gelatinous trout proved to be a welcome respite from the tostada. Bitter leaves, a citrusy cream and thin crisps complimented the gentle earthiness of the fish well. The cool, chunky and zesty mash on the side proved to be a fine accompaniment. 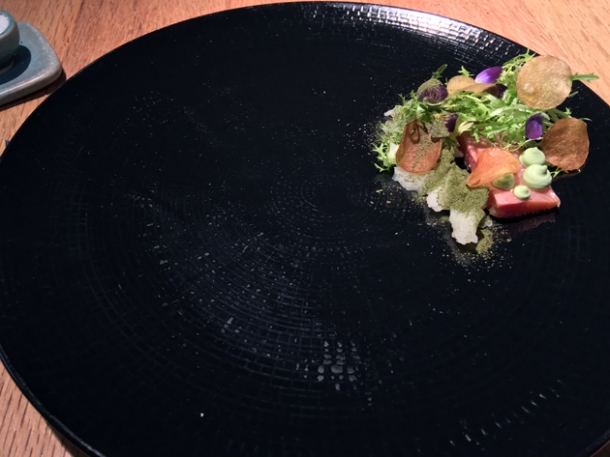 The kitchen really likes plating stuff near the edge of a needlessly large dish.

Although the octopus had a crispy burnt crust, it was served at room temperature. More problematic were the interiors of the octopus segments which were far too soft – almost to the point of mushiness. Tender lotus root could’ve helped save this dish, but it was smothered under bits of egg, chopped peppers and a whole dumpster truck of other ingredients. This messy melange produced little effect beyond a transient and hard to place peppery spice.

A leg to stand on.

The kitchen clearly has an affinity with fish, as the bream was, like the trout, an oasis of calm and collected refinement amongst all the other far messier and more complicated dishes. Meaty and dense, it was made even better by the addictively flavoursome green chilli sauce. Enhanced further by a slice of burnt lemon, the sauce ranged from umami to zesty to the escalating precursor of spicy heat, but which never plateaued into actual tingly burning. Although this lack of a fiery finish might disappoint some, it was entirely appropriate so as not to overwhelm the bream.

A dense and coarse poultry meatball wrapped in bok choy was pleasing, but seemed very out of place amid a sea of refreshing leaves and tomatoes in an oddly nutty, occasionally spicy sauce dotted with chewy, spicy grains. Although needing a little more finesse and cohesion, this was still a satisfying dish. 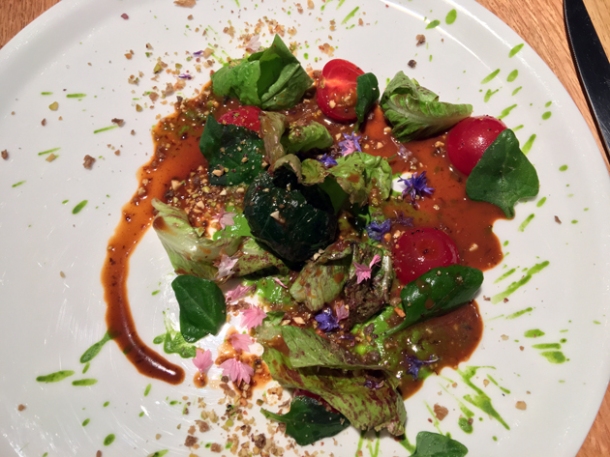 A large hunk of meaty and reasonably moist pork with smoky hints came glazed in a glistening sheath of tomato sauce that was excessively sweet, an effect not lessened when taken with the pretty but ineffectual scattering of vegetables. 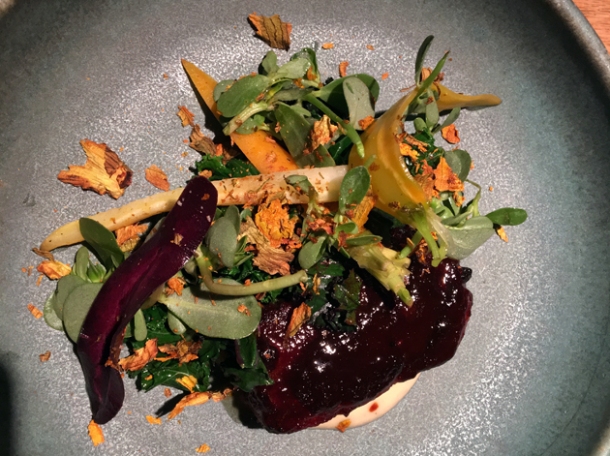 Mexico has a fine barbecue tradition of its own. Not that you’d know it from this. 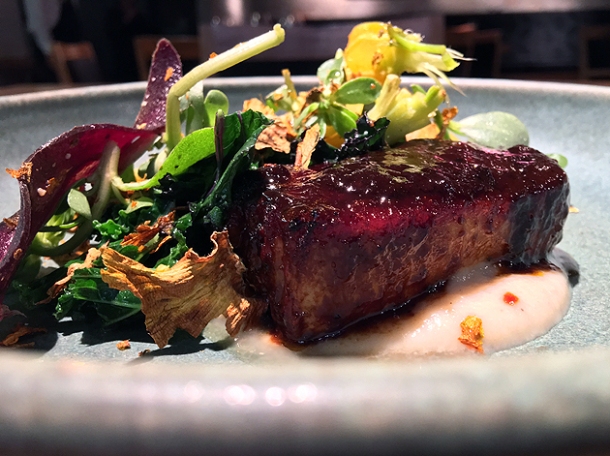 The toffee ice cream was neither cool and refreshing enough nor particular evocative of toffee, although it did have occasional chewy hints of the brown sugar confection it took its name from. In any case, lashings of summer berries, cocoa nibs and sour cream often overwhelmed what little character the ice cream had, but only adding an odd crispness here and there. There was far too much going on in this dessert.

Turning up my toffee nose. 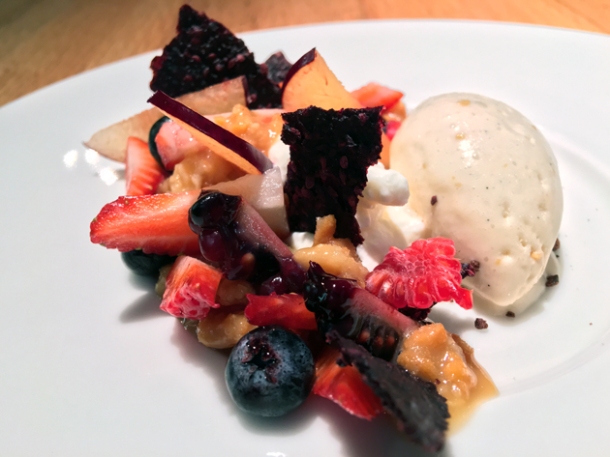 Not quite bearing fruit.

Sadly, matters didn’t improve with the second and final dessert. A nutty chocolate cream accompanied by tapioca, assorted berries and an alky white sauce was certainly sweet, nutty, bittersweet and boozy – but to the point of unpleasant excess and sensory overload. It was a disappointing way to end a meal of numerous ups and downs, especially as the uninspired petit fours offered no redemption.

Sorry folks, no photo of the second dessert.

There’s some potential at the kitchen of Kaah Siis with the fine fish dishes standing apart from the other clumsy, cluttered and less refined concoctions. Sadly though, it’s the latter which dominated the tasting menu here which made for a baffling and unsatisfying experience. When the most remarkable thing about a restaurant is the coat stands, then something really has gone wrong.