Bao is a street food stand that was one of the winners of my Taiwanese buns group test, outdoing flashier, more well known competition such as Flesh and Buns. While Bao still operates a stall at various markets, it now has a small Soho restaurant serving up an expanded menu serving more than just gua bao.

Although bigger, the menu is still focussed with just five gua bao, including a dessert option, and a choice of around a dozen bite-sized sides and small plates directly descended from Taiwanese street food. Bao’s small kitchen, just visible through a small hatch at the back of the restaurant, hasn’t just stuck to the classics though and has an inventive streak.

It’s worth noting that Bao’s dining room, decked out like a Muji showroom with its minimalist wooden panelling, only has around three dozen covers and doesn’t take reservations. Unless you get there early, be prepared to queue. Tables turn fairly quickly though. Not because the service is brusque – far from it, it was always friendly, warm and helpful across all three of my visits. Rather, the backless stool-like seats discourage lingering.

Despite the relative flatness of the rice flour buns served at Bao, they were still very soft and fluffy. The Classic is filled with tender and reasonably moreish shreds of pork. While the coriander was fresh, the other greens and the dash of crushed nuts were surprisingly muted. Although not a bad gua bao overall, it paled into comparison next to its stablemates.

I can just imagine the menu planning meeting. ‘Look, we’ll call it ‘the Classic’ for now and come up with a better name for it later.’

A far better porky option was the pork confit bao. The fatty, tender, slightly salty chunks of swine flesh were made even better by the tingly, sticky sauce and crisp, sweet shallots. Simple, but highly effective.

I can’t tell if calling a gua bao restaurant ‘Bao’ is SEO lunacy or SEO genius.

It would be foolish to ignore the other, non-bun dishes. The beef soup resembles both a French beef consommé and the broth from a bowl of Taiwanese beef noodle soup, a resemblance reinforced by the turnip-like chunks of braised daikon bobbing about. It was a lip-smackingly moreish bowl of beefy refreshment.

Although the scallops are only served in a portion of one, singular mollusc, it’s definitely worth ordering several to enjoy. Although not especially zingy, the firm flesh was still a joy – especially with the subtle moreish hint provided by the bean and garlic sauce.

If you’re tempted to leave a Comment that’s tediously and repetitively witless, go hang out on TripAdvisor with all the other swivel-eyed loons instead.

Century eggs are preserved duck, chicken or quail eggs. Their intensely salty flavour, pungent aroma and dark greyish-green colour means few Westerners are able to stomach them and I admit to disliking them almost instantly when introduced to them around a decade ago. Bao uses century eggs carefully and subtly, crumbling them over thin slices of taut and deliciously earthy mushrooms. The salty creaminess of the egg pieces are much more bearable this way and compliment the mushrooms too. 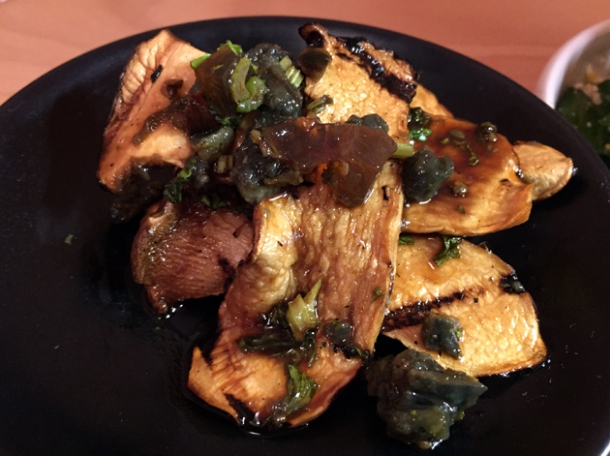 Not sure which animal the eggs here come from, but it hardly matters in such small doses.

I’m fairly certain creamy crumbs of century egg turned up again in the house salad, complimenting the crisp greens which were drizzled with a subtly tangy dressing.

Pass the time queuing outside by feigning interest in the menus of the restaurants next door.

There’s only one dessert on the menu and it’s nothing if not interesting – Horlicks flavoured ice cream sandwiched between two halves of a deep-fried bao. Horlicks in a dessert isn’t as crazy as it might first appear – it’s very popular in Hong Kong and other parts of Southeast Asia. The Horlicky flavour of the ice cream was obscured though by the doughnut-like fried bao, although the bao was at least very soft, fluffy and free from any oiliness. The ice cream could also do with more resting time out of the freezer as its bracing, arctic coldness was painful on first bite. There’s the basis of a good dessert here, but it needs more finesse to truly soar. One useful tip: it’s best to squeeze the two bun halves together, compressing the ice cream. This helps prevent leaking ice cream from spewing everywhere.

At the time of writing, Bao were apparently hiring new front of house staff. I hope the new guys are just as lovely and welcoming as the existing staff.

Lamb tends up fairly infrequently in Taiwanese cuisine in my experience, but you wouldn’t know it from the quality of the lamb bao here. The earthy, tender shreds of meat and sinew were made even better by the tingly, lightly zesty sauce.

Today’s procrastination was brought to you by Florence + The Machine.

The daikon bao may be the only vegetarian gua bao on the menu, but it is by no means a second rate afterthought. The chunky finger of daikon was covered in a crisp, light batter while the vegetable itself was fluffy, light, a little sweet and pleasingly starchy. It proved surprisingly and immensely satisfying when combined with the soft fluffiness of the rice flour bao. 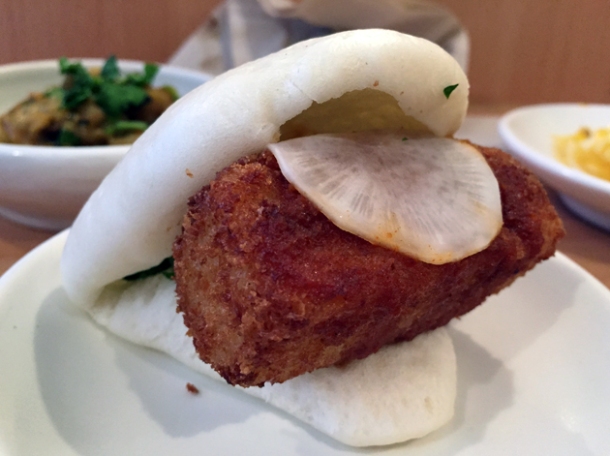 In a truly just world, the Pret across the road would close out of shame and give its larger premises over to Bao.

The fried chicken greatly resembled its street stall incarnation. The moist whole chunks of chicken were covered in a light, crispy batter than had occasional hints of malt and ginger. The meaty nuggets were perfectly good, but they could’ve been even better with more of those flavoursome hints.

The trotter nuggets are the porcine equivalent to the fried chicken. The moist, occasionally ginger-ish shreds of porkiness were coated in a light, crisp and oil-free batter that is nothing if not technically well accomplished.

Most people will blanch at the very words ‘pig blood cake’. This is no horror movie dessert though, but a square patty akin to black pudding. A chunky, meaty, unctuous black pudding enriched further by egg yolk that you mash into the patty yourself. Splendid stuff.

Although the aubergine comes with thin crisps made from fried wonton skins, it’s best to avoid pairing the two. The deliciously smoky baba ghanoush-style flavour of the fleshy eggplant pieces, but with an additional spicy chilli kick, was totally obscured by the crunchy crisps. 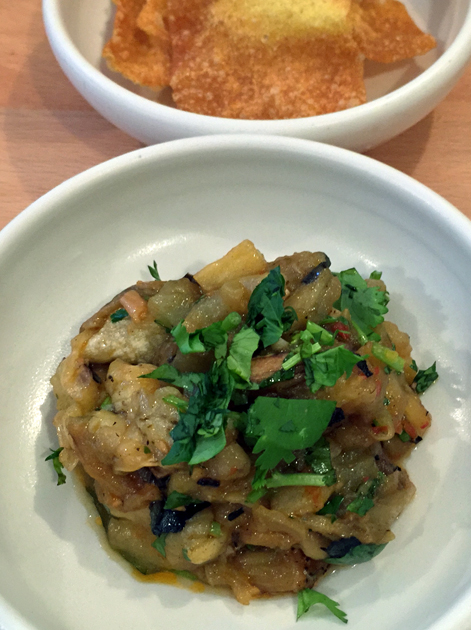 Can I trade the won ton crisps for more aubergine?

The meat in the guinea fowl rice resembles Chinese sausage in its fatty saltiness, but it’s much more tender. Mix the pieces of poultry together with the fluffy, subtly moreish rice and the rich egg yolk and you have a supremely satisfying dish.

Don’t forget to mix it up.

The vegetable fingers used in the sweet potato fries were okay, but the star here was the batter. Like the batter used in the daikon bao, it was light, airy and fluffy. The umeboshi salt was a little tame, but this did at least mean it wasn’t as overpoweringly, mouth parchingly salty as the functionally similar paprika salt used elsewhere. 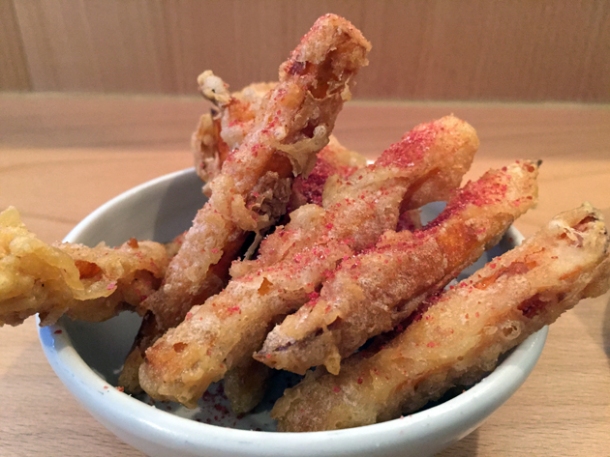 I once explained the difference between fries and chips to an American. The look of bemused difference I got in return was timeless.

Sometimes the best things in life are the simplest, most unexpected ones such as Bao’s rump. Although the thin slices of rare steak weren’t perfectly tender with occasional bits of tough chewiness, that was all forgotten when faced with the beef’s exceptional flavour. I wasn’t quite sure where the steak ended and the aged white soy sauce began. The depth of flavour ranged from woody with a touch of acidity to hints of sweetness and mustard too. Sublime. 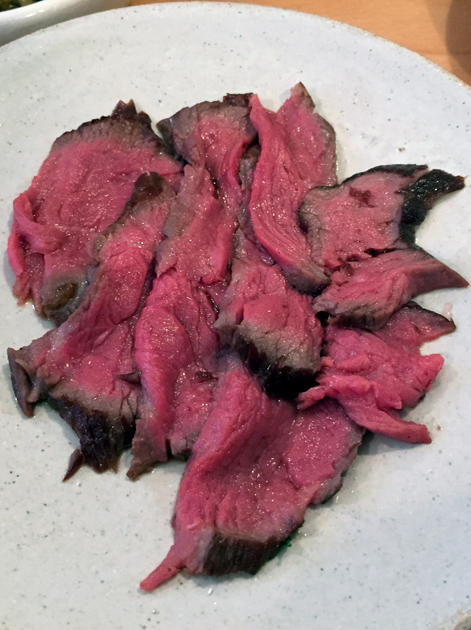 Another reason why I could never become a vegetarian.

The Horlicks fried bao was just the same as it was before, but came out a little quicker than last time. Assuming you’re not allergic to nuts, wash it down with the peanut milk. It’s exactly what it says on the menu – milk but with the bold, distinctive and unmistakable taste of peanuts. It only comes in a very small portion though, but that’s true for all of the drinks. The iced tea, for example, was deliciously crisp, clean and topped with a creamy foam. It adds an extra layer of flavour and texture, but given how it floats above the tea itself it becomes increasingly harder to savour as you slurp down the tea. 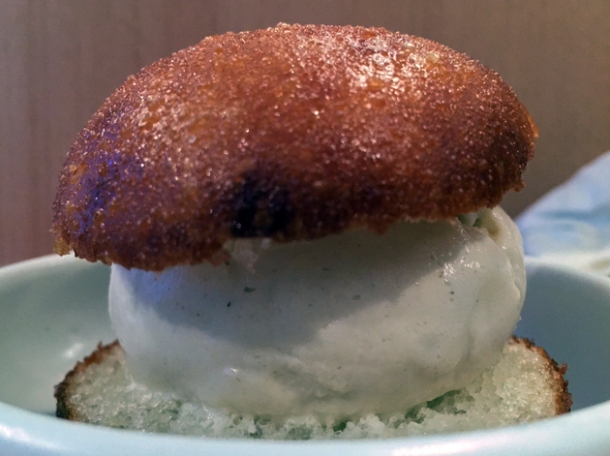 It was surprisingly difficult to focus on the top bun.

Gone in a second. Because it’s both small and delicious.

I returned to Bao one final time with The Euro Hedgie in tow. He enjoyed the rump steak just as much as I did. He quibbled over the pork confit bao though, disliking how the tingly, sticky sauce soaked right through to the rice flour bao in places making it a little soggy and claggy. I thought this was a minor flaw though, especially considering the quality of the pork and sauce.

I have a magic hat.

They give you little towelettes afterwards.

Much improved was the Classic bao, which this time around had adopted shredded pork that was almost as fatty, tender and salty as the swine chunks used in the pork confit bao. It was made even better by the dusting of lightly crunchy, flavoursome nuts, much improved from its initial iteration, and the fresh coriander. The Hedgie wasn’t as taken with the egg and mushrooms as I was, wishing for more century egg. While I still think this dish is perfectly balanced as it is, there should be an option to have more egg for those that can handle its pungent punchiness.

A lesser restaurant would’ve crammed this beauty into a bao. Not here.

The fried chicken bao uses a very different rice flour bao that resembles a traditional sliced burger bun, rather than the usual folded pillow-like appearance. It was still very light though and had a pleasing crispness too. The chunks of battered chicken inside were, surprisingly, quite different from the standalone bun-less version. While whole, tender, meaty chunks of moist poultry were still used, the batter was thinner, lighter and smoother. All this made the chicken chunks a delight, but the piece de resistance was the sour and light spicy kimchi which made this bao irresistible. Simple, but magnificent. 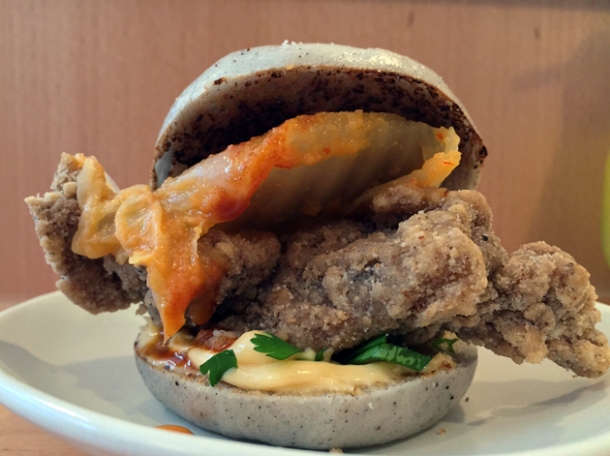 Jinjuu wishes it came up with something this good.

The Hedgie skipped dessert, while I had the Horlicks fried bao which was just the same as it was before.

Yes, a meal I shared with another person is smaller than a meal that I had all to myself. Yet I’m still not nearly as fat arsed as your mum.

Bao continues to make some of the finest gua bao in London, but the kitchen hasn’t sat on its laurels. It has taken the opportunity of a permanent restaurant to expand its menu to delicious effect, coming up with a focussed selection of other sublimely executed dishes that go beyond the usual London Chinese food cliches. Eating at Bao isn’t the life-changing experience other, overenthusiastic reviewers would have you believe. But it is a clarion example of what makes London such a joyous place to eat out – exceedingly well-crafted, reasonably priced dishes that you’d struggle to find elsewhere in the country. Highly recommended.

What to order: Almost everything.

What to avoid: The sweet potato fries. Only because you should save room for everything else.

Average cost for one person including soft drinks and service charge: £30-35 approx. (assuming you don’t push the boat out)