Given the number of early risers and night owls in London, there are surprisingly few breakfast spots worth seeking out and even fewer late night diners. A restaurant that combines both is rarer still. Jackson + Rye on Soho’s Wardour Street opens at 08.00 for breakfast and closes at around midnight-ish. While these opening hours won’t impress ever-restless New Yorkers, they’re notable for London.

Situated inside the premises formerly occupied by Satsuma, Jackson + Rye is split over two floors and is nothing if not a handsome place. The booths, tiles, dark wood panelling and moody lamp lighting aren’t exactly original, but it is all nonetheless attractive and comfortable. 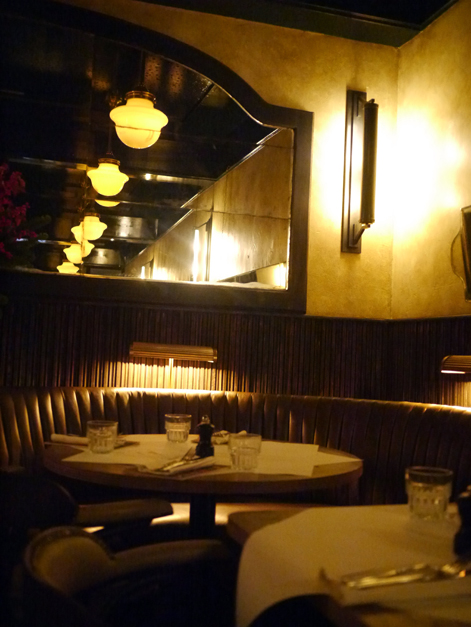 When I say ‘diner’, think East Coast clubhouse rather than 50s rest stop. 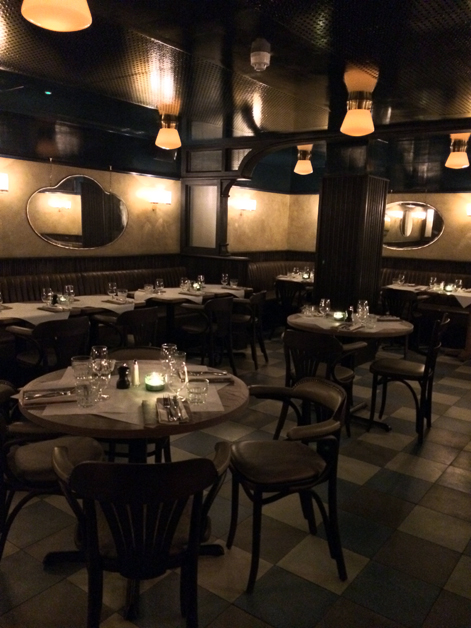 Stumbling through the front door of a restaurant with three tipsy mates an hour and a half before closing time usually elicits scowls or tired resignation at most restaurants. Not so at Jackson + Rye – the chatty, matey yet efficient staff took the mildly inebriated slurring of Vicious Alabaster, Templeton Peck and The Squinting Brummie in their stride.

Vicious Alabaster started off with the shrimp and grits. Although the bog standard shrimp left me cold, we both liked the light, fluffy yet mildly coarse grits. The chilli and garlic helped pep up the shrimp, but was a superfluous extra on the mildly nutty and creamy grits. 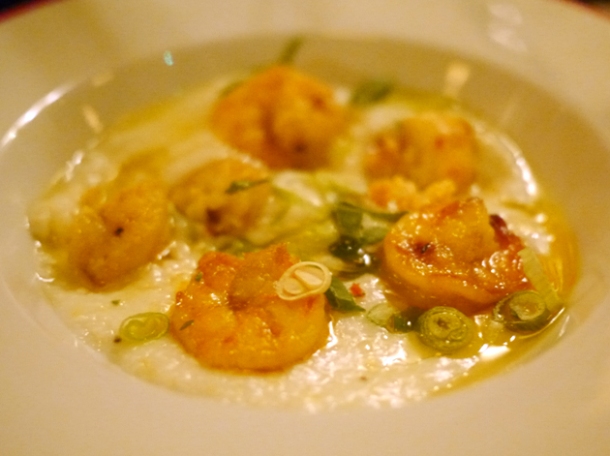 A starter, or an appetizer if you will, of shrimp and grits.

Templeton Peck was both puzzled and unimpressed by his starter of crab and avocado in a spiced tomato sauce. The overall effect was of a solidified blob of crab-flavoured gazpacho served in Heinz-quality tomato sauce. 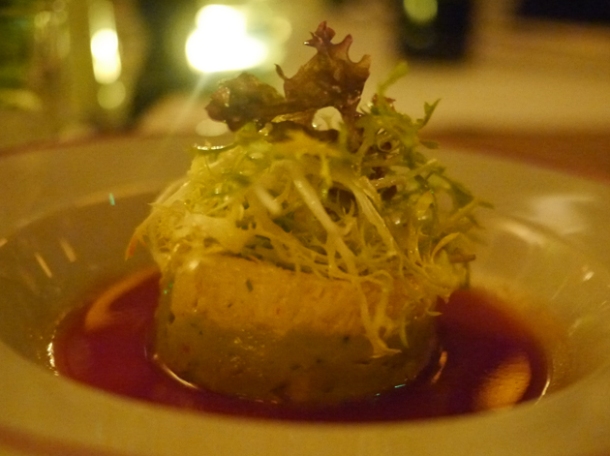 My own starter of corn bread was a bit too dry for my liking, but it was also coarse and mildly nutty. The accompanying creamed mushrooms were unremarkable, but the buttery, slippery lettuce and crisp spring onions were pleasing. 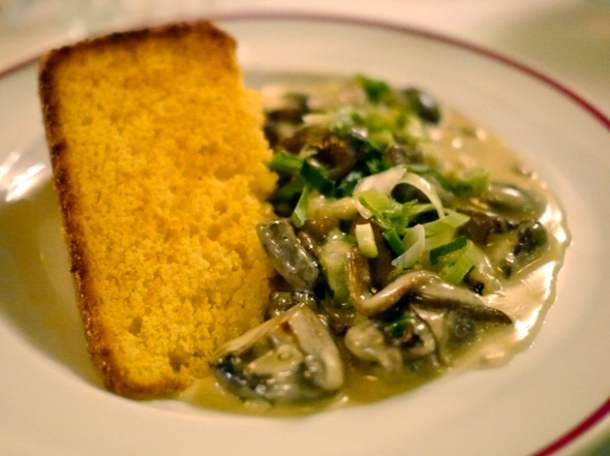 The most impressive starter had to be The Squinting Brummie’s pick of macaroni and cheese. The nutty crust was a delight, while the underlying layer of pasta shells didn’t clump together and the melted cheese wasn’t too viscous or overpoweringly creamy. 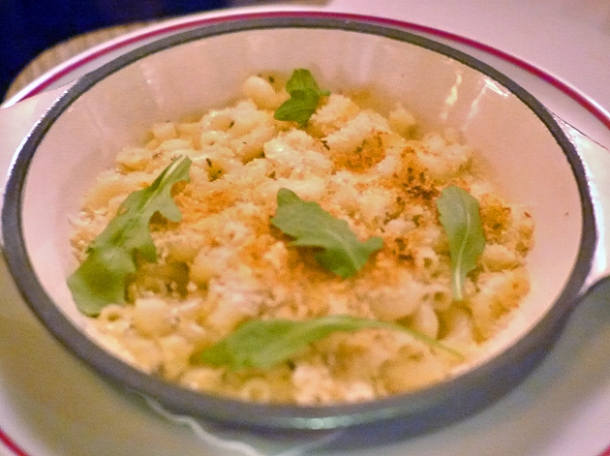 Return of the mac.

Vicious Alabaster was pleased as punch with her steak and eggs. The thin rump cooked rare-ish was moist and not too tough, while the runny yolks of the fried eggs and the garlic butter added a rich, moreish touch. The accompanying fries were thin, floppy and bitty, but at least they were free of excess oil. 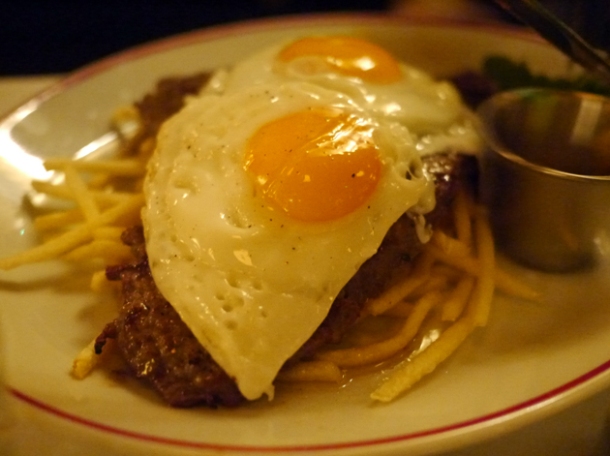 A main course, of entree if you will, of steak and eggs. 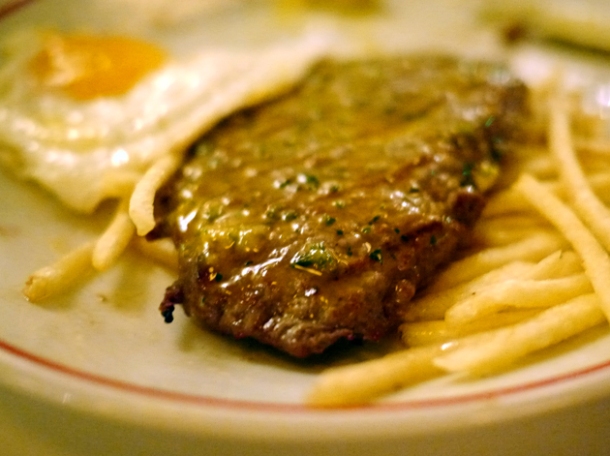 I like to think I’ve avoided Americanisms in my reviews, but they may well have creeped in.

My own main of fried chicken wasn’t bad, but it wasn’t great either. The batter was mildly crunchy, but bland and a bit too oily. The underlying chicken wasn’t anything to write home about either, but at least there were whole chunks of meat rather than reprocessed bits. 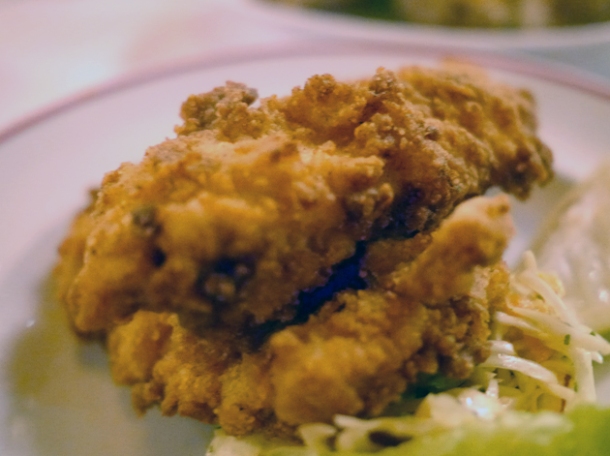 In hind sight, I should’ve turned this plate around for a better photo. Ho hum.

I wasn’t sure what to make of my bone marrow side dish, as there wasn’t enough of the gelatinous stuff to leave an impression. The coarse, bitty crust was definitely odd. 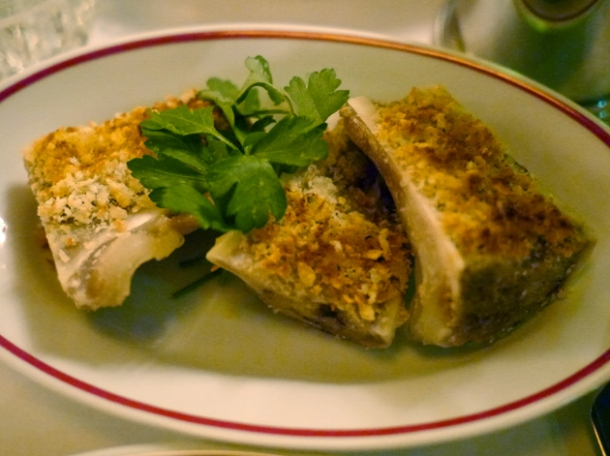 Cut to the bone.

Both the Brummie and Peck opted for the cheeseburger cooked medium rare, which they described as roughly equal to Byron but not as good as Burger and Lobster. I have my own thoughts about the burger in the second part of this review. 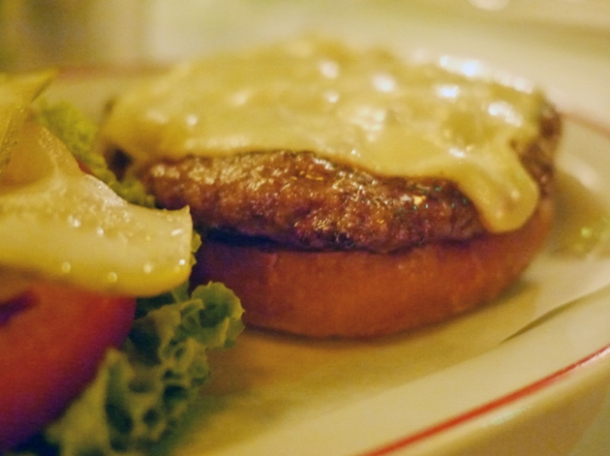 Served open so you can slather it in ketchup if you’re common.

Vicious Alabaster and Templeton Peck didn’t have room for dessert, but I did and went for the pecan pie with ice cream. The shallow depth of the filling may seem disappointing at first, but this is a good thing as it already has a lot of nuttiness and a very rich treacly sweetness. An even deeper, larger serving would have been overpowering. The accompanying ice cream has a surprising booziness to it, but was nonetheless an effective palate cleanser.

[Ooops – forgot to take a photo of this one.]

The Squinting Brummie jumped on the peanut butter cookies with childish glee. The thin and crisp cookies were weakly flavoured and didn’t attempt to replicate the viscousness of actual peanut butter. The accompanying chocolate sauce was also unimpressive, but the milk ice cream was suitably refreshing and had a clean after taste. 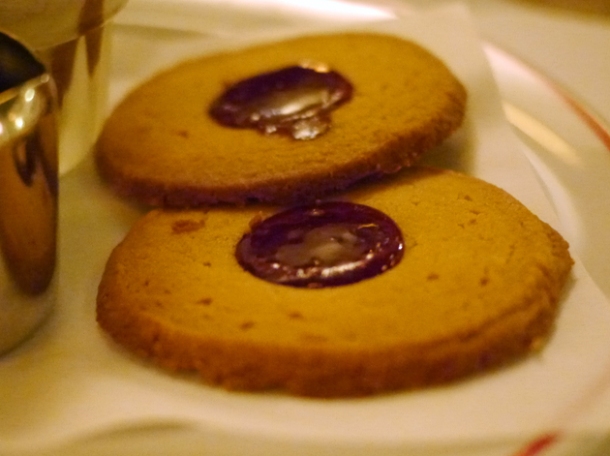 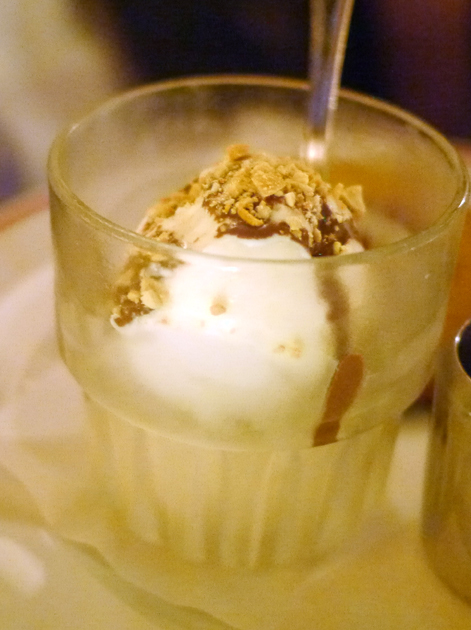 I washed it all down with the iced tea, but the dominant taste was of lemon. At least it wasn’t too sugary sweet, but considering how citrusy the iced tea already is, I shudder to think what the Arnold Palmer, a mixture of lemonade and iced tea, tastes like. 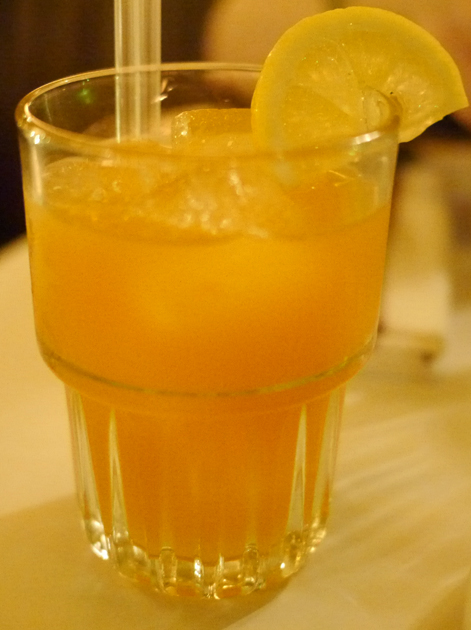 For a nation of tea drinkers, we’ve been curiously lukewarm on iced tea.

I returned to Jackson + Rye all by lonesome. Despite not having a reservation on a weekend evening, I was quickly seated as a considerable swathe of tables are set aside of walk-ins – just as it should be for a self-proclaimed diner.

I skipped starters and went straight for the cheeseburger. The medium rare patty was moist, smoothly ground and slightly chewy. The pickled rings of onion added some tartness, but these and the other vegetables had a habit of falling out as the very soft, fluffy, slippery buns did an inadequate job of holding everything together. The promised gruyere cheese didn’t leave much of an impression. Overall, it’s not a bad burger and is certainly one of the better ones in London, but there are superior burgers available from elsewhere – including from the nearby branches of Byron, Honest Burgers and Burger and Lobster. 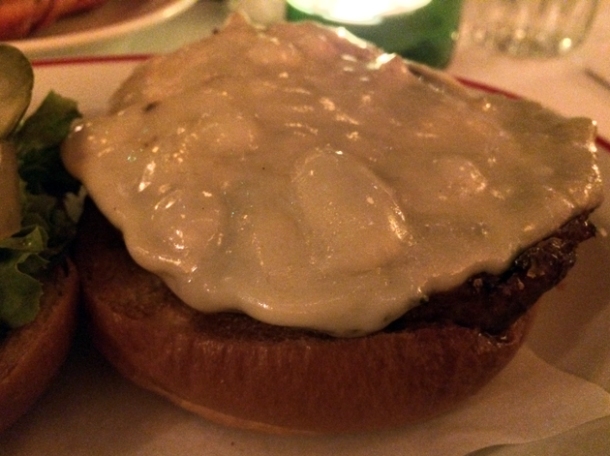 Speaking of lobster, Jackson + Rye also serves up a half portion of the crustacean which I had to try. I was pleasantly surprised by the firmness, mild butteriness and zingy freshness of the flesh. 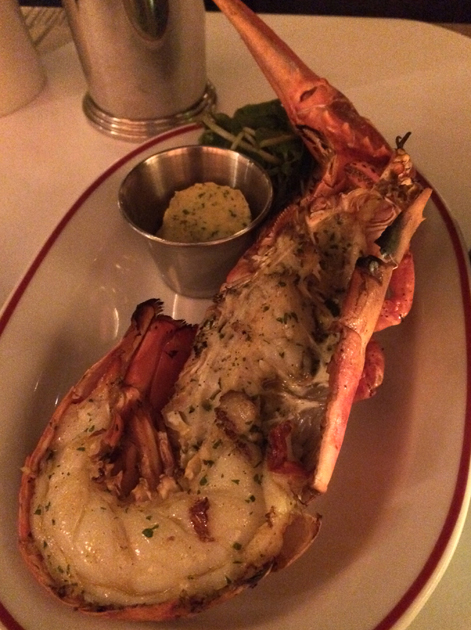 …and lobster, but not from Burger and Lobster.

The side dish of creamed corn grits was more creamed corn than grits, with the hefty portion of sweet kernels making it hard to appreciate the fluffy coarseness of the cornmeal. 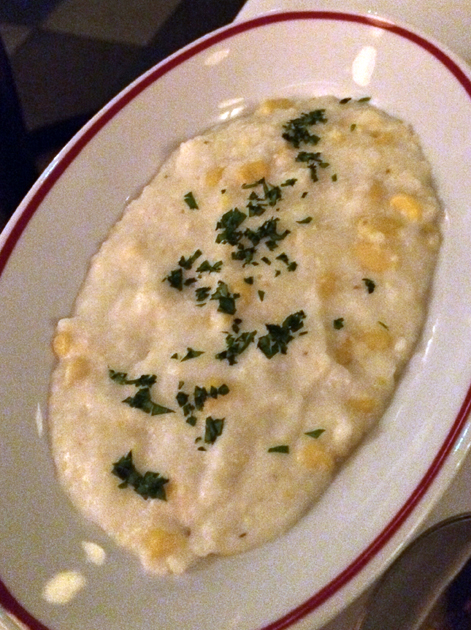 Should’ve had the shrimp and grits again.

The frozen soufflé sounds intriguing, but was actually a tedious chore to chow my way through. Although the large, fluffy dessert largely resembled an ice cream, the crunchy iciness oddly dotted with white chocolate buttons was unpleasant, while the vague summer berry flavour was unsatisfying. 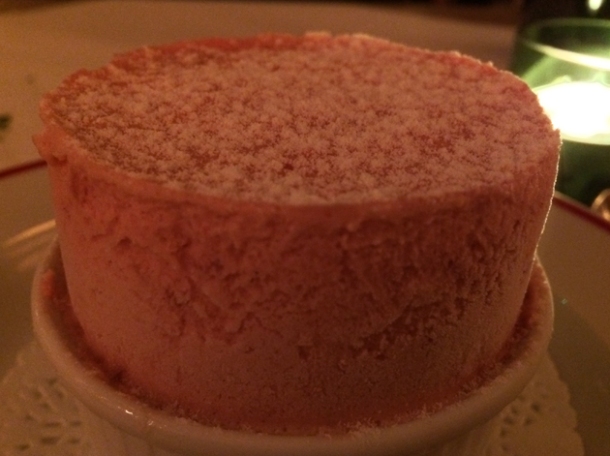 I should’ve seen this one coming. 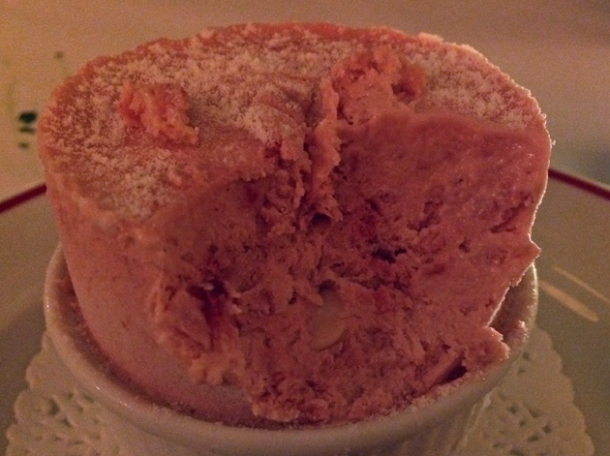 The iced coffee, served in a mug, was another odd disappointment – too milky and bland. 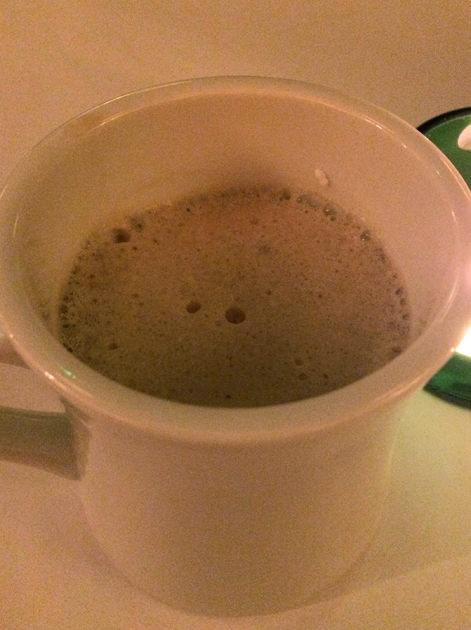 Breakfast on a weekday at Jackson + Rye is unsurprisingly a very different experience from dinner, with the buzzing chortles of Soho’s drunken hordes replaced by the whispered murmurs of media types meeting over coffee and pastries.

A good flat white is tricky to make, so I wasn’t surprised by the substandard version served here. The head was far too foamy, while the rest of the coffee had, at best, a very mild chocolatey maltiness. The silky smoothness of the best flat whites was also missing. 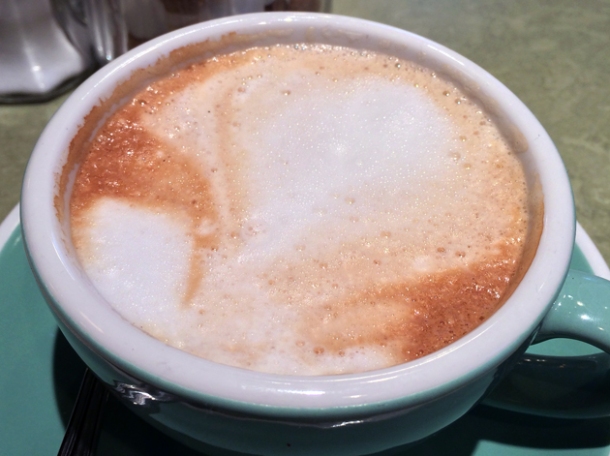 I don’t have a problem. I can quit any time I want.

I clearly have an obsession with grits. The breakfast version is topped with toasted flaked almonds and blueberries with some maple syrup served on the side for drizzling. As before, the grits were light, mildly coarse and fluffy. The almond flakes left me unmoved, but the sweetness of the fruit was complimented well by the sweetness and distinct flavour of the maple syrup which wasn’t too viscous. The syrup arguably overpowered the grits rather than complimented them, but overall it was still a satisfying breakfast dish. 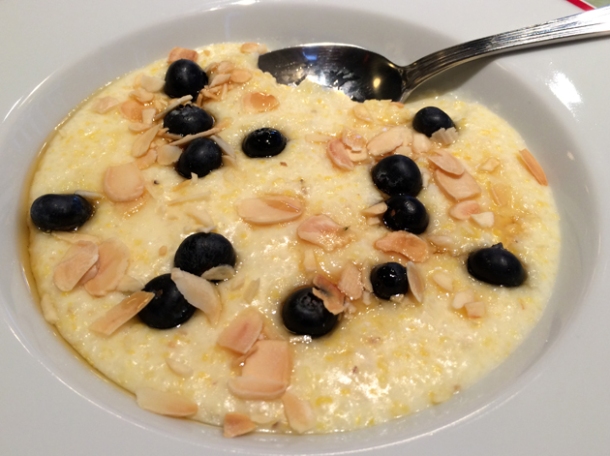 Grits for breakfast. Think of it as porridge made from corn instead of oats if that helps you.

Eggs are available in almost every form, apart from boiled, and served with an array of accompaniments. I opted for fried eggs served with bacon, fried potatoes, sausage and toast. I would’ve expected and preferred hash browns rather than fried cubes of potato, but the most notable thing about this breakfast was how sweet it was. Maple syrup had been infused into the thick slices of fatty American-style pork belly-derived bacon rashers and the quintessentially Yankee-style sausage meat patty. Both meats were still satisfying, especially the herby and sweet sausage patty, while the rich, runny egg yolks were a treat when eaten with the crunchy, chewy sourdough toast. 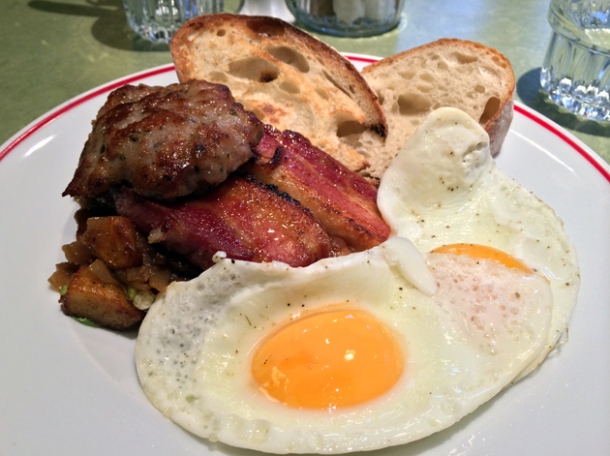 This platter of carbs and fried animal products is called the ‘farmer’s’ for no readily apparent reason.

The food at Jackson + Rye is hit and miss, but it’s of a good enough standard, and the service is charming enough, that you wouldn’t be ashamed to start, end or recover from a night of debauchery here.

Average cost for one person including drinks and service: Dinner – £40 approx. Breakfast – £8-16 approx.