During my recent round up of American-style barbecue places, an unsurprisingly large number of the best places to eat were market stalls and residencies inside bars. One of the winners of that round-up, Texas Joe’s, has since set up shop inside Brewdog Shoreditch. This gave me the perfect excuse to see how this Texan newcomer compared with BBQ Whiskey Beer which, at the time of dining, was located at the Wargrave Arms near Edgware Road but has since relocated to the country for the winter.

I revisited BBQ Whiskey Beer with the help of the Youngling and, between the two of us, managed to plough our way through a life-threatening amount of ribs. The kitchen was criminally late in sorting out our starter of baby back ribs – but as compensation they essentially doubled the size of the already gluttonous portion.

The baby back ribs came coated in a spicy, tangy sauce that stuck to the tender pig meat rather than to my fingers. The tangy heat was pleasing, but they were also a touch on the dry side and weren’t smoky at all.

The beef short rib and the pork spare rib can both be sampled in one sitting thanks to the unimaginatively named ‘Mixed Grill’. Youngling, who had eaten at the Soho branch of the mediocre Bodean’s the day before, was instantly impressed by the upgrade in flavour.

The charred dry bark of the beef short rib gave way to reveal a tender, moist, mildly fatty slab of meat on the bone, but without the expected layer of collagen. There was an abundant amount of smokiness to the beef rib, but it was a bit chemically. Although very peculiar, it didn’t spoil my enjoyment of the rib.

The same strange chemically smokiness was also present in the pork spare rib. Although tender and mildly fatty, it was also a little drier compared to both the beef short rib and the pork spare rib from my last visit. I’d attribute this to the natural variation in the pigs’ fat content, but I don’t know enough about porcine anatomy and animal husbandry to say so for certain. 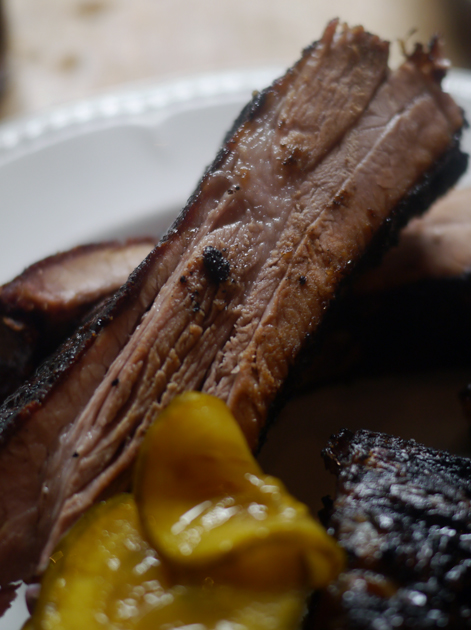 Brewdog Shoreditch has never held much appeal to me as a non-drinker, but the bar has hosted a couple of kitchen residencies over the past year or so and the latest is Texas Joe’s. Best known for his jerky and Dragon’s Den appearance, Texas Joes’ beef brisket sandwich was easily the best brisket dish in my barbecue round up.

The residency has a bigger menu than the original market stall and the Sampler allows you to, well, sample a large swath all in one sitting. The ‘link’ sausage was very beefy and coarsely textured, yet also surprisingly light – it’s easily tasty enough to give many German sausages a good run for their money. The coleslaw was unremarkable though and a mere half slice of pickle seemed insufficient given the amount of meat to be devoured. Although the beans were a little too watery and soft, they were surprisingly piquant. 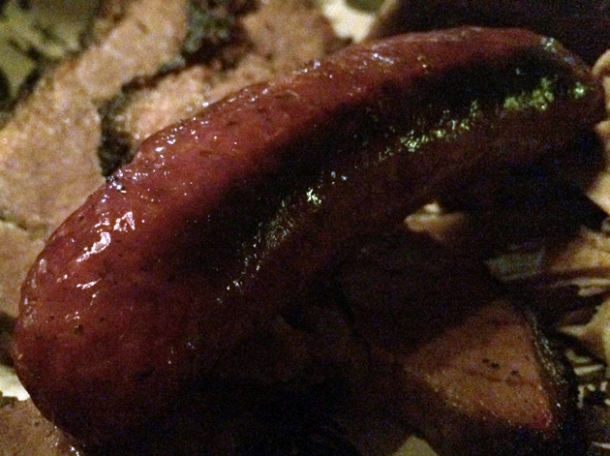 Don’t be a silly sausage.

The pork shoulder, which presumably forms the basis of the pulled pork, was a little disappointing. Although tender and reasonably moist, it relied heavily on the accompanying jar of a thin, fruity tomato-based sauce for both flavour and moisture. Without it, the pork would have been a little tedious to chow through. 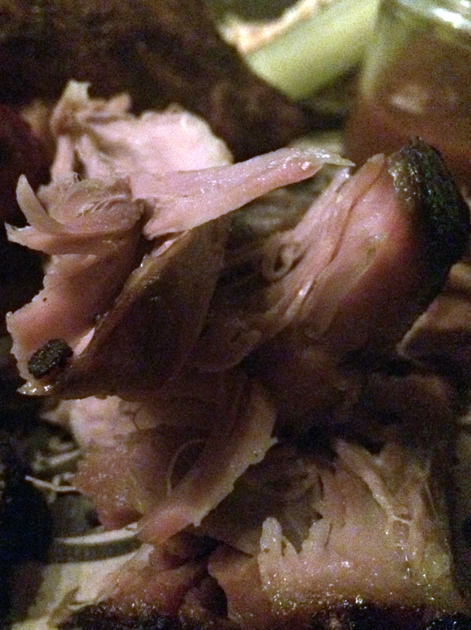 Yes, this is a rubbish photo.

The beef brisket, which until now I had only tasted chopped and served in a bun, wasn’t especially smoky but was otherwise very good indeed. The bark was charred and slightly chewy, while the beef underneath was moreish and succulent with small rivulets of fat running underneath the main layer of beef. 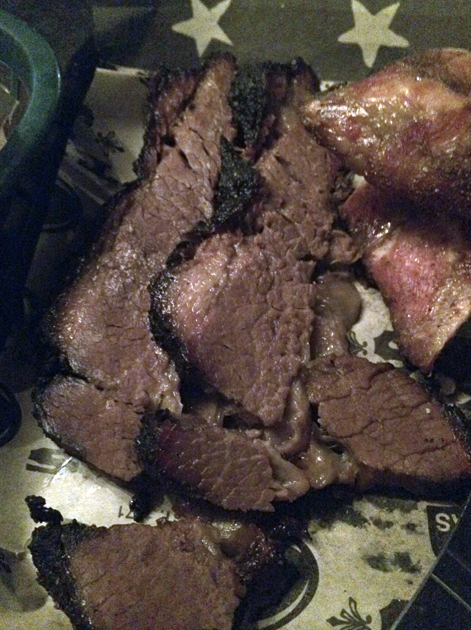 No longhorns were harmed in the making of this brisket.

The pork spare ribs had been prepared with a dry rub that was lightly pepperty, salty and lip smackingly moreish with a flavour almost reminiscent of Chinese five spice. Although a touch dryer than other pork spare ribs I’ve had, it was still moist, pink and very lightly smoky with a delicate smoke ring.

Given the size of the Sampler there’s no need for side dishes, a gut-saving revelation I wish I had known before ordering the jalapeno cornbread. It was light, fluffy and surprisingly fruity, although totally lacking in heat as well as the nutty sweetness I normally associate with cornbread. 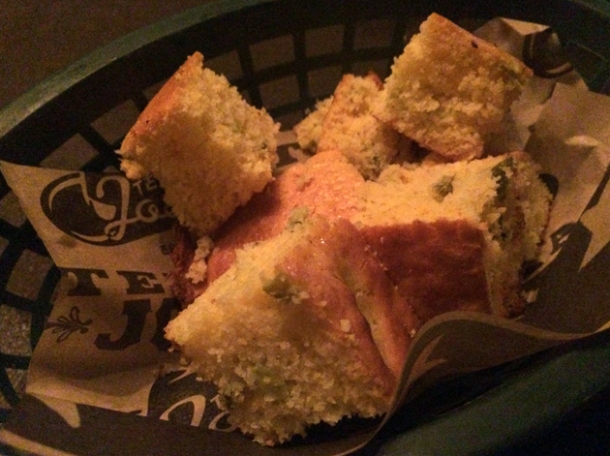 Cubed for eating as a bar snack.

Given the quality of the beef brisket, I had to return to try out the beef short rib and I was glad I did. The charred, dry bark gave way to a thin layer of moist meat that pulled away from the bone in slightly waxy shreds of flesh. Although lacking in smokiness, it was lightly sweet and salty in a way reminiscent of both soy sauce and Chinese five spice. Although not quite as good as the beef short rib available from either Miss P’s Barbecue or Smokestak, I was still left gagging for more which is definitely a good thing.

The four thick slices of Texan toast are easily large and stodgy enough to be a main course in their own right if it wasn’t for their odd blandness. While crisp, they were lacking in the garlic butter found on Duke’s version. As this is only the second time I’ve had Texan toast I won’t be too critical about it, but it’s definitely a ‘side dish’ designed for sharing – there’s just far too much carbs for one person to have alongside a mass helping of meat and pudding. 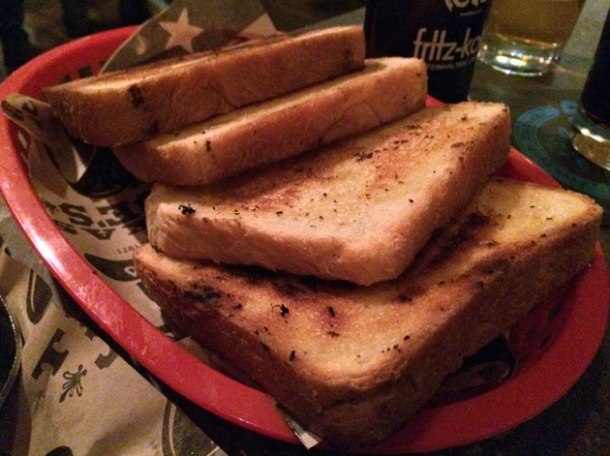 A toast to Joe.

I wasn’t expecting much from the banana pudding. I was therefore pleasantly surprised by the crunchy biscuit, slices of banana and the light and creamy banana custard. Although none had that distinctive banana tang, the variation in texture was pleasing and they were all, collectively and cumulatively, intensely sweet but not overpoweringly so.

I hadn’t intended to return to Texas Joe’s (if only to avoid the appearance of favouritism), but I found myself in Shoreditch with The Euro Hedgie in need of a hearty Sunday dinner on a blustery autumnal evening. Texas Joe’s has started serving a slightly gimmicky ‘barbecue Sunday roast’. The meat remains barbecued, but all the trimmings are traditional British ones with a Texan twist.

Despite the so-so pork shoulder from my first visit, I opted for the pig anyway and it was far better this time around. The tender hunk of pork was moist and mildly fatty. The Hedgie opted for the beef brisket and was immediately impressed with it – it was just as good as before. 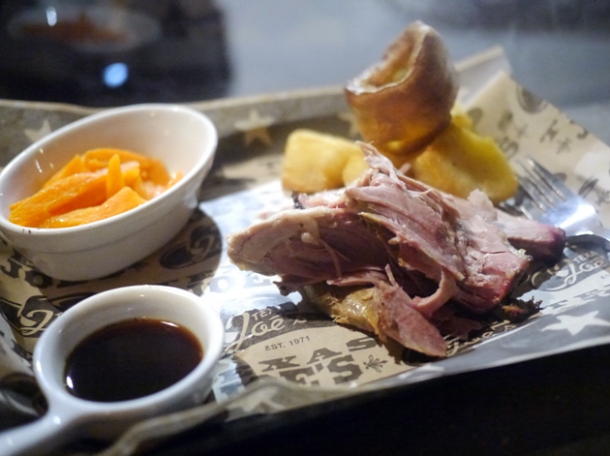 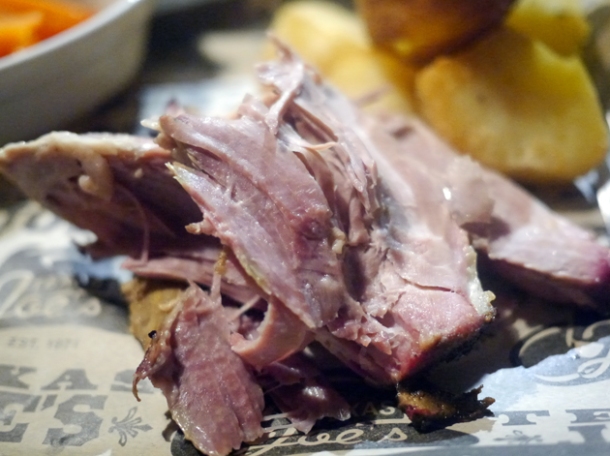 We were divided when it came to the trimmings – I enjoyed them all, but the Hedgie was underwhelmed and had hoped for a wider selection. Although the jalapeño Yorkshire puddings weren’t that different from plain Yorkshire puds, I enjoyed their crispness nonetheless. The roast potatoes were also good – crispy on the outside, fluffy on the inside. The puds and spuds went especially well with the thin but tangy and moreish gravy. This is just as well as the gravy didn’t really suit either the pork shoulder or the brisket which are both easily strong enough to stand on their own without any embellishments. The cumin carrots were lacking in the promised spice, but were tender and very buttery. 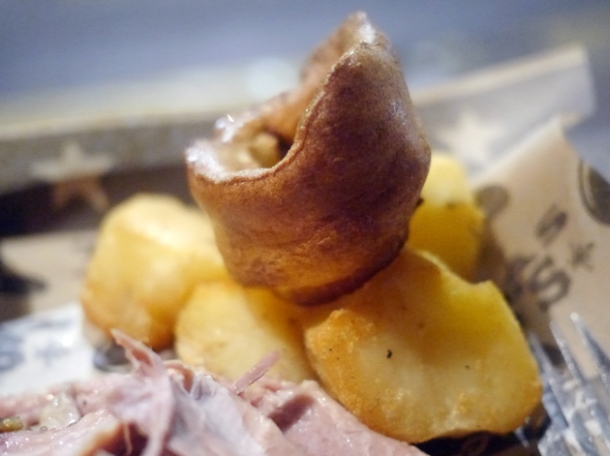 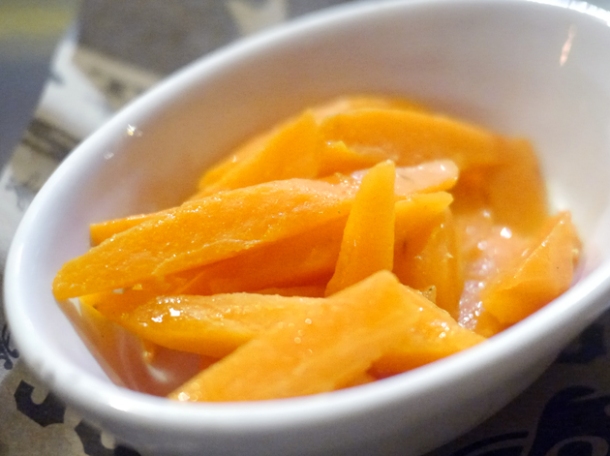 The jalapeño Yorkshire puddings may have lacked the spicy heat I was expecting, but the same couldn’t be said of the side dish of stuffed jalapeños. They packed a spicy punch that, combined with the dangerous Holy Fuck sauce from The Rib Man, were easily potent enough to give a mild case of the heat sweats. I thought it best to not to enquire into the provenance of the mystery white filling, but we both agreed that the bacon used to wrap each jalapeño was too crunchy and not fatty enough.

Finally, no review of Texas Joe’s would be complete without a mention of his beef jerky – the product that the oddly-dressed Texan touted on an episode of Dragon’s Den. Compared to other jerkys I’ve had, this one wasn’t excessively sweet, too tough or embalmed in a ridiculous and artificial ‘teriyaki’ flavour. It was a bit chewy in places, lightly sweet and a bit salty in a soy sauce-like way with an occasional suggestion of spice. As a carnivorous equivalent to popcorn, it’s a pleasing one. 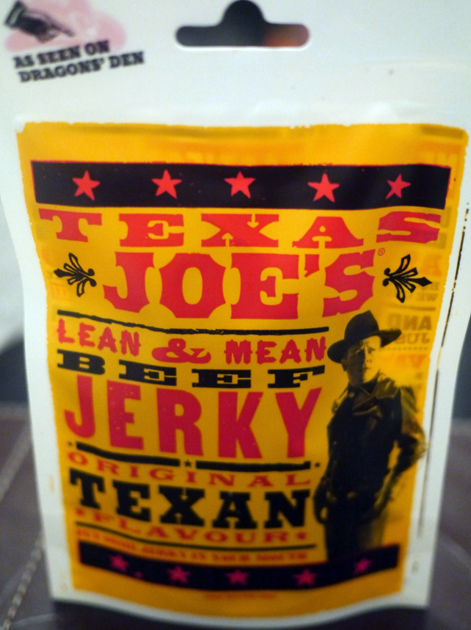 It’s OK to have beef jerky for dessert, right? 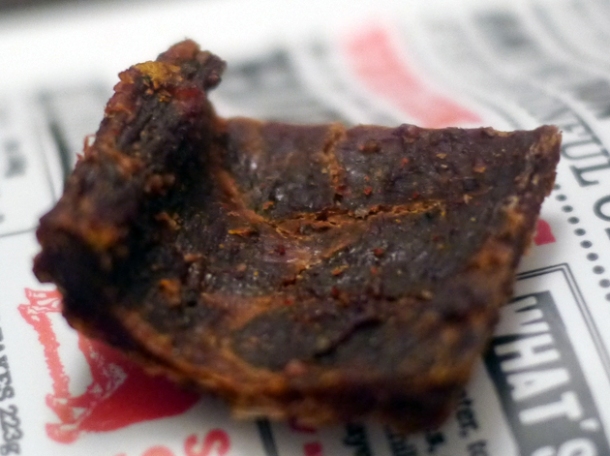 Don’t dismiss it out of hand just because it’s available in Sainsbury’s – that would be a knee jerk reaction.

BBQ Whiskey Beer was one of the better barbecue places in London, but Texas Joe’s is even better – and not just because the latter hasn’t (temporarily) abandoned the capital for the sticks. The laconic Texan’s brisket and beef ribs are easily among London’s best and are well worth the small trek to Shoreditch.

Average cost for one person including soft drinks: £20-30 approx.