Given the array of regional Chinese cuisines available in Shanghai, eating at T8, a Modern European restaurant, will seem like a bit of a cop out. However, T8 is not only regarded by some as one of the mega city’s best restaurants, it’s also one of the few of its kind in Shanghai so I had to try it out. This is despite the fact that the place is a magnet for expats, yuppies and tourists – and I hate eating with other tourists.

T8 is situated in a hard-to-find nook of the fashionable Xintiandi district. T8’s premises is actually a handsomely refurbished shikumen – a 19th century stonehouse of which there are now precious few in Shanghai. Inside, the handsome wood panelling and funky fixtures all revolve around the open plan kitchen visible through sheer glass partitions. Unlike some of the rest of modern Shanghai, it’s an effortlessly elegant place. 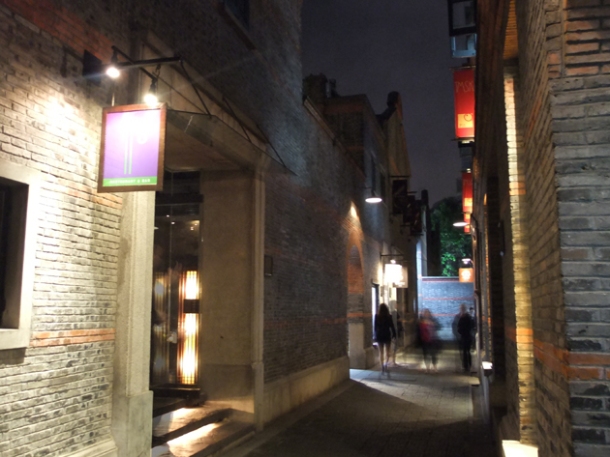 The menu is available in English and most of the staff speak English, albeit in a very quiet, softly spoken manner. They’re almost too polite – their deferential manner is almost alarmingly subservient.

Unsurprisingly for a restaurant located in a traditionally rice-eating part of the world, T8’s bread isn’t anything to write home about. Although fluffy, the olive bread is too timidly flavoured to be worth writing home about.

Watermelon salad with goat’s cheese sounds like an odd combination, but it works surprisingly well. The sweet, juicy refreshing chunks of watermelon contrasts nicely with the smoky, burnt, boldly creamy chunks of goat’s cheese, while the fennel and pickled shallots adds a sharp, tangy edge. The blueberries add little to the dish though, while the ‘watermelon gazpacho shot’ seems to be nothing more than watered down watermelon juice and helps to clear the palate more than anything else.

Watermelon salad. Not as silly as it sounds. 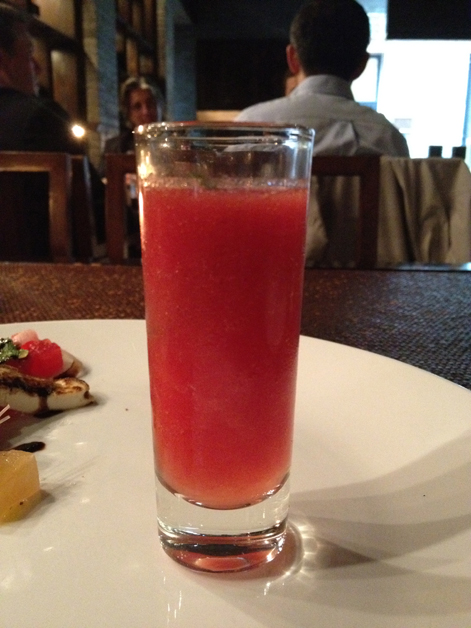 Watermelon gazpacho? Pull the other one.

T8’s selection of foie gras came in three parts and one was significantly better than the other two. The first was a rich and smoky pan fried foie gras which was almost good enough to rival the best European foie gras dishes. The effect was ruined though by the rather limp brioche roll on which it was served and the generally unremarkable fruit jelly accompaniments. Only the tangy, orange marmalade-like jelly succeeded in providing an interesting counterpart to the foie gras, as it was capable of cutting through its rich creaminess. 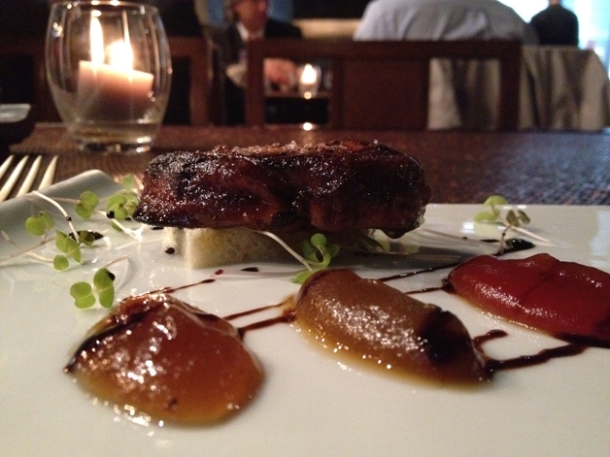 Foie gras. Not the oddest thing you can eat in Shanghai, not by a long shot.

The second foie gras took the form of a cold parfait studded with what were essentially Cocoa Pops. The parfait had most of its flavour chilled out of it and I just don’t see the point of adding the Cocoa Pops – their crunchiness clashed with the smoothness of the parfait. 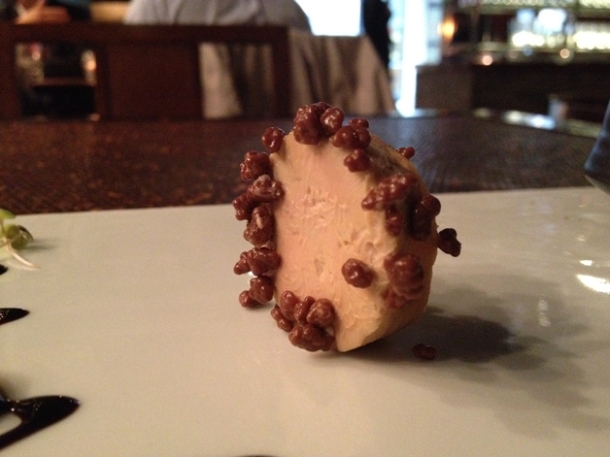 Is foie gras produced locally in China? I’m guessing not, so the carbon footprint of this foie is probably pretty big…

The most remarkable of the three foie gras dishes was the last – a wispy foam-like cream hidden underneath a layer of chewy crutons and a slice of quince-like jelly. This upper layer is there to provide some contrast in terms of taste and texture, but it’s really not necessary given how utterly remarkable the foie foam is.

As soon as it entered my mouth, I was taken aback by the sudden hit of deeply salty fattiness. As soon as it dissolved on my tongue, a wispy melting sensation released a delicately creamy aftertaste. It’s easily one of the most addictive, accomplished and whimsically inventive foie gras dishes I’ve had on any continent. 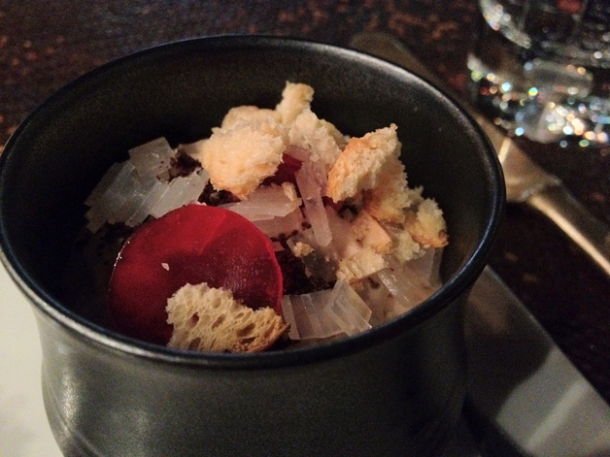 There was actually a large dollop of foie gras foam underneath all of that.

Black cod usually turns up only in Japanese restaurants, so I was keen to see what T8 would do with it and I wasn’t disappointed. The dense, meaty chunk of fish has been poached in olive oil which gave it a delicately mild fruity flavour. The black cod wasn’t at all oily though and it was very moist, indicating an especially high fat content, while the sweet, salty caramelised crust reminded me of both soy sauce and miso.

The fish is served on a small bed of fresh seaweed. I deeply wish there had been more of the stuff given its deep, addictive umami-ness. The smallness of the seaweed serving is compensated for by the wonderfully creamy mango sauce which effectively and evocatively captures the distinctive flavour of that tropical fruit. The red pepper puree is just as good, distilling the sharp sweetness of a red pepper in a small thick liquid puddle. Overall, this is a lovely dish on every level.

Following the foie gras foam and the black cod was always going to be tough and my dessert, while good, wasn’t quite as show stopping as those two dishes. The passion fruit soufflé is very delicate and soft. The wispy, airy cake has a crisp, sugary crust as well as a distinct passion fruit flavour accompanied by a gentle zestiness courtesy of orange oil. The icy mango sorbet is smooth, supple and distinctly flavoured, but I almost wish I could’ve had a larger soufflé instead. 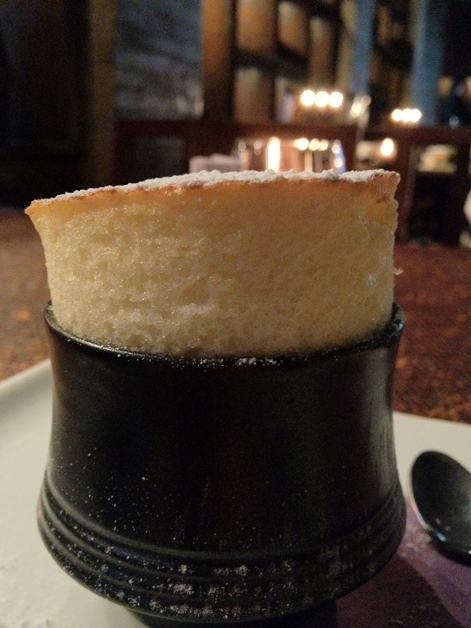 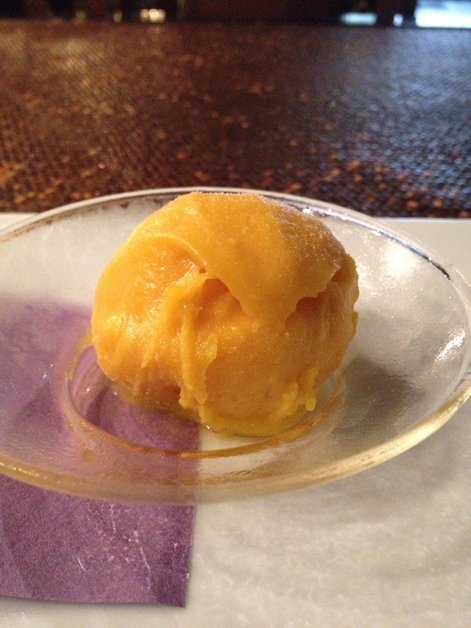 I didn’t expect to find a superb Eclectic Modern European restaurant in Shanghai, but I found just that in T8. Although it’s not quite as good as some of the best places in London and Barcelona, if you can afford the high prices then it’s well worth taking a break from the city’s varied and delicious Chinese cuisines to try it out.

Total cost for one person including soft drinks: ¥840 (approx. £84 at time of writing).